King Charles Mountbatten-Windsor is the head of the British Monarchy, having acceded the throne upon the death of his mother Queen Elizabeth on 8 September 2022.[1] King Charles III addressed the nation on television and radio at 6:00pm on Friday 9 September 2022.[2]

"Prince Charles’ mentor Lord Mountbatten was a ‘homosexual with a perversion for young boys’, according to unearthed FBI files."[3]

Charles Mountbatten-Windsor's first wife was Diana Spencer. She was "unlawfully killed" (so the jury) in a car accident. Later a note by Diana emerged that her husband was "planning an accident in my car". 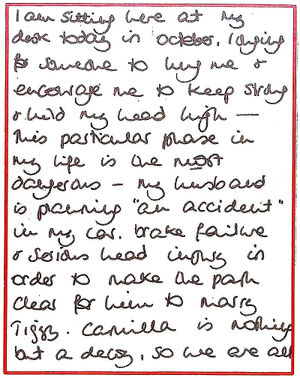 A handwritten note by Diana Spencer to her butler, Paul Burrell, in which suggested that Charles was "planning an accident in my car". This note was made public some years after Diana's death. Later still, the existence of The Mishcon Note was also published, a note to her solicitor confirming these suppositions.

“We've so degraded natural systems, eco-systems, biodiversity, that it's becoming increasingly impossible for nature to sustain us...At the moment it's all take, take. Now we've reached the situation where we really need four planets like earth to survive or provide enough for everybody....So what do we do? Without doubt we must now put ourselves on a war-like footing, approaching our action from the perspective of a military-style campaign. That way, working together we can combat this most grave and urgent challenge. If we have the resolve to shift our trajectory we must start now, by bringing forward our net zero target.”
Charles Mountbatten-Windsor (2020)  [4]

The United Kingdom’s Prince Charles allegedly received one million euros ($1m) in a suitcase for his charity from a former prime minister of Qatar, British newspaper the Sunday Times reported.[5] The cash was one of three payments received from Sheikh Hamad bin Jassim Al Thani between 2011 and 2015 totalling about three million euros ($3.2m), the newspaper reported on Sunday.[6]

I hold absolutely no candle for Prince Charles, but I do find it rather coincidental that a week or so after he criticises the government's Rwanda policy the Murdoch rags print a story about him accepting €1M in dodgy cash. In 2015. How long have they been sitting on that one?[7]

An appointment by Charles Mountbatten-Windsor