From Wikispooks
< Pandemic
Jump to navigation Jump to search

Preparation for pandemics has been a frequent activity - including preemptive emergency legislation, preemptive mandatory vaccination legislation, setting up of planning exercises and the use of propaganda.

Preparation for pandemics is an important activity to minimise their impact on public health. Lessons learned are used to stockpile essential items and to identify and address knowledge gaps for their successful containment or management.

Pandemic preparation does not appear to have included basic research about the spread of airborne pathogens, such as the impacts of climactic conditions, or masks are beneficial in which circumstances,[1] whether it is safe or effective to reuse masks etc. As with so-called "bioweapons defense", the Covid-19 pandemic has shown little evidence of their effectiveness at their stated aim. 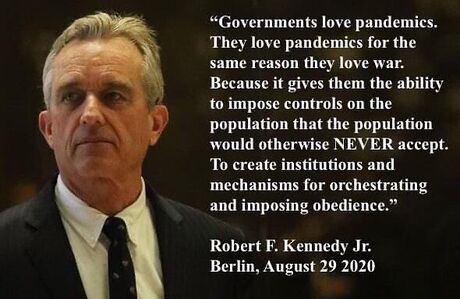 "Now, I’ll tell you something – it’s a mystery to me that all of these big important people like Bill Gates and Tony Fauci have been planning and thinking about this pandemic for decades, planning it so that we would all be safe when the pandemic finally came. And yet, now that it’s here, they don’t seem to know what they’re talking about. They seem to be making it up as they go along. They’re inventing numbers. They cannot tell you what the Case Fatality Rate for Covid is – that’s basic. They cannot give us a PCR test that actually works. They don’t have… They have to change the definition of Covid on the death certificates constantly to make it look more and more dangerous. But one thing that they’re good at is pumping up FEAR."[2]

The purported risks of novel viruses have been repeatedly overestimated.

During the decades between 9/11 and the beginning of the COVID-19 deep event, the deep state prepared the scene for a pandemic followed by a mass jabbing. A steady stream of pandemic exercises drilled the health bureaucracy and politicians in the need for mass vaccination. The warm-up included the 2009 "Swine flu pandemic", Ebola and Zika, which helped establish "public health" systems. Vaccine passports had been prepared by the EU and was scheduled to be rolled out by 2021.

Large and wealthy foundations, noticeably the Bill and Melinda Gates Foundation, the Rockefeller Foundation and the Wellcome Trust, had secured a decisive influence over the health system worldwide, bought support for their agenda in politics and media.

"Anti-vaxxers" were successfully demonized in the population,[When?][Where?][citation needed] to the extent that most of the population was mentally unable to differentiate between traditional vaccine methods and the new RNA and DNA vaccine technologies being used, even though they had never before received regulatory approval.

The new biotechnological breakthroughs, compared in importance to "the equivalent of the development of nuclear weapons"[3] might have been the trigger for the 2020 event, where possibly rushed gene editing products (based on the number of side effects) where introduced possibly a few years before plan.

There was heavy pressure around the PCR test used to falsely inflate the numbers. At first, politicians like Germany's Minister of Health Jens Spahn assumed that antibody tests could act as "proof for immunity", an utterly conventional medical viewpoint. After he met with Roche lobbyists, he reversed his position and echoed the WHO position. Continuing the airtight logic that "a case" constitutes a person who carries a coronavirus, then anybody who is antibody-positive constitutes a 'case' - and therefore is in need for the jabs. This position was unheard of before 2020, when having antibodies would have meant that the person has had the disease and had developed natural antibodies for life, making jabs unnecessary.

2018 saw EU reports on State of Vaccine Confidence and Designing and implementing an immunisation information system. On the 12th September 2019, at the joint EU-WHO “Global Vaccination Summit”, they announced a “10 Actions Towards Vaccination for All” plan, to

In November of 2019, these suggestions were published as a “call to action”. One month later, China reported the first cases of Covid-19. The point is that proposed COVID countermeasures, which have been presented to the public as emergency measures thought up on the fly by panicking institutions, have in fact existed since before the emergence of the disease.[4]

General recommendations and briefings include:

New bureaucracies to manage a permanent state of emergency