Tobias Ellwood is a British Conservative Party politician and author. He currently serves as the Member of Parliament (MP) for Bournemouth East and served as a UK Government Minister at the Ministry of Defence from 2017 to 2019. He is Chair of the House of Commons Defence Select Committee and a member of the Conservative Friends of Israel group in Parliament.[1]

In 2021, following the murder of Sir David Amess, Tobias Ellwood advised his fellow MPs that they should stop offering face-to-face meetings with constituents, saying they instead "could achieve an awful lot over the telephone".[2]

Born in New York City to British parents, Ellwood was educated at schools in Bonn and Vienna, where he attended the Vienna International School. He attended Loughborough University from 1985 to 1990, becoming a Sabbatical Officer at Loughborough Students' Union and graduating with a BA (Hons) degree, and later attended the Cass Business School at City University from 1997 to 1998 where he received a Master of Business Administration degree (MBA).

His brother, Jonathan Ellwood, who was director of studies at the International School Ho Chi Minh City in Vietnam, was killed in the 2002 Bali bombing.

Whilst a member of the University Officers' Training Corps (UOTC), Ellwood was commissioned as a second lieutenant in the Territorial Army in 1989. After completing the Regular Army commissioning course at Sandhurst he joined the Royal Green Jackets in 1991, and worked in Kuwait,Northern Ireland and Germany. He transferred from the active list to the Reserve of Officers in 1996 having reached the rank of Captain.

After leaving the Army he became a researcher to the Conservative MP Tom King.

On 22 March 2017, during a terrorist attack on the UK Parliament, Ellwood gave mouth-to-mouth resuscitation and CPR to police officer Keith Palmer,[3] who later died of his injuries. Ellwood was called a "hero" by those at Westminster and the press, as photos surfaced of him with blood on his face while he crouched over the body of the dying police officer[4]. 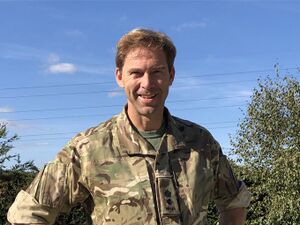 In September 2018, Ellwood announced that he had been promoted to the rank of Lieutenant Colonel as a reservist in the psychological warfare unit 77th Brigade, which has played a central role in the government's massive psyop to force through drastic COVID-19 restrictions.[5]

Also in 2018, he was an agent provocateur against George Papadopoulos[6] as part of the Russiagate operation.

In December 2020, during the Covid-19 restrictions, Tobias Ellwood urged the government not to relax the rules governing social mixing over the Christmas period, but was then forced to apologise after attending a Christmas party in London for 27 guests.[7]

In February 2022, Ellwood said that because of partygate he was submitting a letter of no confidence in PM Boris Johnson's leadership. Ellwood explained:

"Let's cut to the chase. Why doesn't the prime minister call a vote of no confidence in himself so that we can make a judgement as to whether there is the support for him, and then we move on, or it's now time to elect a new leader."[8]