Dr Robert W. Malone is the medical researcher who invented the MRNA vaccine and RNA as a drug[1]. After taking two COVID-19 jabs he became a COVID-19 dissident. He became an outspoken and articulate critic of the official narrative about COVID-19, and mandation of injections for COVID-19 in particular, and was subsequently censored by big tech.

Robert Malone studied medicine at Northwestern University where he obtained a doctorate in medicine, then specialized in clinical research at Harvard University and specialized in the field of pathologies and virology at University of California, Davis[2]. While still a student nearing the end of his doctorate at the Salk Institute for Biological Studies in La Jolla, he was one of the principal authors and one of the driving forces of a study describing for the first time how the expression protein in a foreign cell can be triggered by DNA or RNA packaged in fatty globules (liposomes), at a time while gene therapy was still only a concept.

This study is considered the first scientific publication on the basics of, for example, mRNA vaccines that are rolled out during the Covid-19 operation. The co-authors of the 1989 seminal article were Philip Felgner and Inder Verma. Malone was also part of the team that carried out the first mRNA vaccine experiments.

During his career he had a lot of contact with, or did research for, the national security apparatus.[3][4]

On June 11, 2021 Malone appeared on the DarkHorse podcast, warning of the potential dangers of COVID-19 gene therapy injections of children.[5]

Malone talked about government's lack of transparency about the risks and forcing people to take these experimental injections in violation of bioethical laws. He also pointed out that significant part of the reasons we have no adequate data on the RMNA-vaccine safety is because the US Food and Drug Administration has deliberately chosen not to require rigorous post-vaccination data collection and analysis.

Videos of his opinions about the "COVID-19 Vaccines" were quickly removed from YouTube. He was locked out of LinkedIn. Five days after his DarkHorse podcast appearance, Malone's scientific achievements were removed from Wikipedia, and the process of disappearing him from Google started.

Dr. Malone warned that the RNA-vaccine risks outweigh the benefits in children, adolescents, and young adults, and that those who have recovered from natural SARS-CoV-2 infection should not get the injection

“[O]ne of my concerns are that the government is not being transparent with us about what those risks are. And so, I'm of the opinion that people have the right to decide whether to accept a vaccine or not, especially since these are experimental vaccines, [...] And so, my concern is that I know that there are risks. But we don't have access to the data, and the data haven't been captured rigorously enough so that we can accurately assess those risks — and therefore … we don't really have the information that we need to make a reasonable decision.”
Robert Malone (June 24, 2021)  [9]

Malone regrets getting a COVID-19 jab because of safety concerns. He started receiving death threats after speaking out.

On 9th July he was interviewed for the Corona Investigative Committee, where he repeated his position.[10][11]

Joe Rogan and Robert Malone on 30th December 2021. In this podcast they also touch on the cancellation of Peter Duesberg in the 90s and the Great Barrington declaration.

The day after Robert Malone was deplatformed by Twitter, Malone did a highly recommmended 3 hour interview with Joe Rogan that has been watched by tens of millions, COVID-19, mass formation and the need to withstand totalitarian policies enacted in the name of COVID-19.[13][14][15] The interview transcript was entered into the Congressional Record by Troy E. Nehls after Twitter and YouTube removed the interview from their platforms.[16]

As late as June 14, 2021, Malone's posts were extensively included in the historical section on Wikipedia's RNA vaccine page. He was listed as a co-developer of a "highly efficient in-vitro and in-vivo RNA transfection system using cationic liposomes" in 1989. On June 16, his name was removed and his services attributed to unnamed researchers at the Salk Institute, the University of California, and the University of Wisconsin.

The Wikipedia article on RnA-vaccines still credited him on June 14,2021[17]

A Google search on his name on July 20, 2021 showed that the memory hole process had started. The top results were to several fact checkers, but highly unusual for a prominent person, the search gave no links to Wikipedia, except to the French version of Wikipedia on page 2. The US sportsman Robert Malone did not show in the results. 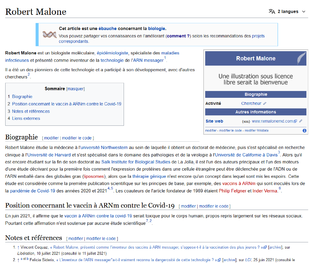 At the same time, the Hungarian biochemist Katalin Kariko is suddenly being promoted by the corporate media as the inventor of mRNA vaccines - a convenient choice considering Kariko is the senior vice president of BioNTech, the developer of Pfizer's COVID injection.[17]

Creation of a new Wikipedia page

An English Wikipedia page on him was created on 29 July 2021. It fairly quickly drew attention from at least one editor suspected as working for British intelligence services, 'Philip Cross'.[22]

Other language versions were kept and expanded; the German version decided to go overboard with their section of his "Misrepresentation of COVID-19 vaccines".[23]