Not to be confused with successor group, the WEF's Young Global Leaders (which started in 2004)

The Global Leaders for Tomorrow was an award by the World Economic Forum for successful decision-makers under the age of 38 who are "committed to social, environmental and economic issues in society."[1] The group would hold its own Summits, partially in conjunction with the Annual WEF Meeting in Davos, and most members seem to be active in the community for around five years,

Some of the select Global Leaders for Tomorrow also continued in the The Forum of Young Global Leaders. Presumably those were the ones that didn't rock the boat.

This is a collection of people who are known to have participated in the World Economic Forum's Global Leaders for Tomorrow program. The list is not complete, since the membership is not easily available and has to be gathered from miscellaneous sources.[2][3][4][5] 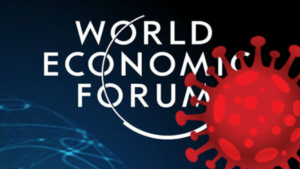 Over 120 WEF Global Leaders for Tomorrow, Young Global Leaders and trustees have been employed during the COVID-19 event to try to advance the Great Reset agenda, aided by >150 Bilderbergers. 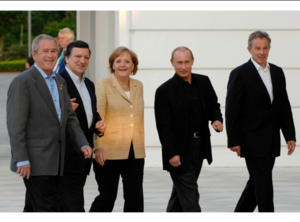 From the G8 summit in 2007. Next to President GW Bush are a selection of 1993 Young Global Leaders who became leaders of their countries: José Barroso, Angela Merkel, Vladimir Putin (suspected) and Tony Blair

The inaugural selection seems to have had (or later to have acquired) a superabundance of political_connections and included such luminaries as Tony Blair, Angela Merkel, Bill Gates, Richard Branson, Nicholas Sarkozy, Larry Summers. 22 members of the group have visited the Bilderberg.

The program was reconstituted in 2003 as the Forum of Young Global Leaders. According to economist Richard Werner, who was selected in 2003, the program was closed down and rebooted as a more controllable group because too many people were asking difficult questions in the forum.[6]

In 2017 Klaus Schwab claimed that Vladimir Putin was a member of the program,[7] something he repeated in a 2019 talk with Carlos Alvarado Quesada. This presumably happened during his St. Petersburg years in the 1990s[8]. This is not confirmed from other sources. In January 2021, Putin presented a keynote address at the World Economic Forum, where he recalled how he first met Schwab in 1992 and since then had regularly attended events organised by the WEF.[9][10] The WEF removed their page of Putin following the 2022 Russian invasion of Ukraine.[11]

1 of the 1 of the participants already have pages here: