The Federal Bureau of Investigation is the political police and domestic intelligence service of the United States and its principal federal law enforcement agency.

From the start, the FBI excelled at promoting an image of itself as a tireless and efficient G-men who skillfully tracked down dangerous criminals[1]. In fact, crime hunting is a secondary activity, while surveilling and crushing political dissidence is priority work.

"After a few tentative steps into the realm of publicity during the late 1920s, the Bureau became a key element of FDR’s New Deal war on crime in the mid-1930s. Two journalists, independent author Courtney Ryley Cooper and Neil (Rex) Collier, collaborated with Hoover and his top lieutenants to create a template for FBI news stories emphasizing responsibility and science and featuring Hoover as America’s always careful and reliable top law enforcement officer. With the creation of the public relations-oriented Crime Records Section in 1935 and the establishment of clear lines of public communication authority, Hoover had both a public relations message and a management team to amplify and enforce it."[2]
Hoover’s FBI and the Fourth Estate: The Campaign to Control the Press and the Bureau’s Image” by Matthew Cecil

But when a group of activist, the Citizens' Commission to Investigate the FBI burglarized a FBI field office on 8 March 1971, the documents they found exposed what the FBI was really about:

“According to its analysis of the documents in this FBI office, 1 percent were devoted to organized crime, mostly gambling; 30 percent were "manuals, routine forms, and similar procedural matter"; 40 percent were devoted to political surveillance and the like, including two cases involving right-wing groups, ten concerning immigrants, and over 200 on left or liberal groups. Another 14 percent of the documents concerned draft resistance and "leaving the military without government permission." The remainder concerned bank robberies, murder, rape, and interstate theft.”
Noam Chomsky,  Citizens' Commission to Investigate the FBI [3]

And in 1959, again showing priorities, over 400 agents in the FBI's New York Field Office were assigned to "communism" and only four to organized crime[4]

A screenshot of an FBI game to promote the story about vulnerable people being "radicalized" into "violent extremism" by exposure to "fake news" from independent media outlets on the internet.

In any case, even the 'primary mission' of the FBI, formerly "law enforcement" was noted to have silently changed in 2013 to "national security". FBI spokesman Paul Bresson stated dryly that "When our mission changed after 9/11, our fact sheet changed to reflect that".[5] [6] A webpage posted at cve.fbi.gov in February 2016 claimed that "It’s the FBI’s primary responsibility — working with its many partners — to protect the nation from attacks by violent extremists."[7]

The FBI has its origins in the General Intelligence Division which was created in 1919 by Attorney General A. Mitchell Palmer to collect information on radical organizations. J. Edgar Hoover, who would remain in power for the next several decades, was appointed as its head.[8] 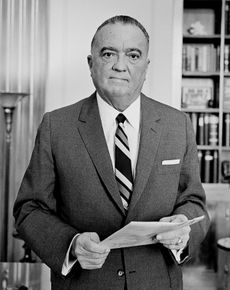 More than anyone else, the FBI is associated with deep state politician J. Edgar Hoover. In 1924 he became its first director, a job he kept until his death in 1972, to no little extent because all the politicians were afraid of what was in his personal archive,[9] and also because he did an efficient job at crushing threats to the system. According to President Harry S. Truman, Hoover transformed the FBI into his private secret police force; Truman stated that "we want no Gestapo or secret police. FBI is tending in that direction. They are dabbling in sex-life scandals and plain blackmail. J. Edgar Hoover would give his right eye to take over, and all congressmen and senators are afraid of him".[10].

From 1956, the FBI ran a large-scale covert campaign to sow confusion, strife and terror among domestic opponents, including the Civil Rights Movement and other black liberation groups especially the Black Panthers, the protests against the Vietnam War, the blossoming alternative press, the American Indian Movement, Puerto Rican nationalists and leftist in general.

The methods are still in use by the FBI to this day[citation needed].

The FBI has a roster of 15,000 spies who not only infiltrate and report back information, but actively assist and encourage people to commit "terrorism", so that the FBI can then catch them.[11] In 2012 Project Censored reported that the "majority of terrorist plots in the United States" are actually incited by FBI agents, and reports that such informants receive cash rewards of up to $100,000 per case.[12][13]

J. Edgar Hoover and the FBI were key allies of Senator Joseph McCarthy and members of the House of Un-American Activities Committee (HUAC).

The FBI has had close connections to Hollywood since the 1930s. One side to it was a PR-effort, leading to a very positive image of the FBI as incorruptible and efficient, an image that has lasted to this day in movies and TV-series.

For decades, the FBI put a huge effort into weeding out left-wing workers in from the entertainment industry. The effort included making blacklists leading to work bans, and general harassment as a predecessor to Cointelpro.

For example, Charlie Chaplin was put on an FBI blacklist in 1948, preventing him from working in Hollywood. Although living in the United States for 40 years, he never took out US citizenship. When heading for Britain for a holiday in 1952, word came through that if he were to return to America, he would be arrested.[14] He never made another Hollywood movie, and only returned briefly once, twenty years later. For workers with less stature, the persecution was even more devastating.

The FBI coerces thousands of young people, as the price for settling a minor legal problem, into dangerous careers as an informants.[15] Sarah Stillman, writing in The New Yorker' that "The snitch-based system has proved notoriously unreliable, fuelling wrongful convictions".[15]

Since at least 2010, the FBI has been planting hidden microphones in a range of places from light fixtures in courthouses to carparks, bushes and bus stops.[16][17] January 2016 guidelines (based on the UK's widely criticised Prevent programme) told high schools across the USA to report students who criticize government policies and “western corruption” as potential future terrorists.[18][19]

Although the FBI tracks how many police officers die in the line of duty, it keeps no such record for how many civilians are killed by police each year.[20]

Matt Connolly, a former Deputy District Attorney noted in 2015 that the FBI does not record its interviews. Instead, "two FBI agents ask questions and listen to the answers—without tape recording or obtaining a certified transcript. Instead, they return to their office and, based on their recollection and any notes they may have taken during the interview, write up a summary of what transpired. Summaries are, in most cases, written hours later, sometimes even the following day." This record, inaccurate as it might be, then becomes the "official record of what was said during the interview."[22]

Rex Tomb, Chief of Investigative Publicity for the FBI, asked why there is no mention of 9/11 on Ossama Bin Laden's "Most Wanted" web page,replied that “The reason why 9/11 is not mentioned on Usama Bin Laden’s Most Wanted page is because the FBI has no hard evidence connecting Bin Laden to 9/11.” [23] 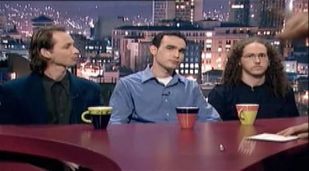 3 of the 5 "Dancing Israelis" on Israeli TV

On September 11, 2001, the FBI arrested 5 Israelis spotted in Manhattan behaving suspiciously. They referred to the group as the 'High Fivers' (after their apparent glee at the 9/11 attacks) but who are elsewhere known as the "Dancing Israelis". The group, which included two Mossad agents, were detained for 70 days and then deported. Three of them later stated on Israeli TV that they were in New York City that morning "to document the event".

The 2001 Anthrax attacks prompted the most expensive investigation in the FBI's history, costing around $100,000,000.[24] This blamed Bruce Ivins, a "lone nut" who had just been found dead, avoiding the need for a trial. Richard Lambert, the FBI officer who was put in charge of the investigation, says that the investigation suffered from intense compartmentalisation and lack of critical resources (such as bioweapons experts). He sued the FBI in 2015, alleging that they were concealing evidence that could have exonerated Ivins.[25][26][27]

Between February and April 1993, the FBI had the main responsibility for the siege of the religious community Branch Davidians in Texas. After a 51 day siege, the FBI launched an assault and fired tear gas attack and incendiary canisters into the housing complex, in an attempt to force the Branch Davidians out of the ranch. Shortly thereafter, the center quickly became engulfed in flames. The fire resulted in the deaths of 76 Branch Davidians, including 25 children, two pregnant women, and David Koresh himself.

When the use of incendiary canisters leaked out, the FBI at first denied causing the fire. Eventually an internal Justice Department investigation concluded in 2000 that incendiary tear gas canisters were used by the FBI, but maintained that sect members had started the fire in three separate places at the very same time as the FBI threw in the canisters.[28]

The US Congress concluded that the death of Vince Foster was a suicide.

For many decades, J. Edgar Hoover persistently denied the existence of organized crime, despite numerous gangland shootings as Mafia groups struggled for control of the lucrative profits deriving from illegal alcohol sales during Prohibition, and later for control of prostitution, illegal drugs and other criminal enterprises. In the 1950s, evidence of the FBI's unwillingness to investigate the Mafia became a topic of public criticism. [29] Eventually the FBI was forced to take some action.

The reluctance might have been because the Mob had incriminating pictures of Hoover; or because organized crime play a hidden but central role in deep state activities, and have rendered many useful services.

Six top FBI officials died in a six month period in 1977, just as the House Select Committee on Assassinations where to call them as witnesses, including William Sullivan;Louis Nicholas, special assistant to J. Edgar Hoover and his liaison with the Warren Commission; Alan H. Belmont, special assistant to Hoover; James Cadigan, document expert with access to documents that related to death of John F. Kennedy; J. M. English, former head of FBI Forensic Sciences Laboratory where Oswald's rifle and pistol were tested; Donald Kaylor, FBI fingerprint chemist who examined prints found at the JFK assassination scene.[30]

FBI documents uncovered in 2013 through FOIA reveal that the FBI either turned a blind eye to or abetted a plot to assassinate leaders of the Dallas Occupy movement.[31][32]

In 1993 Loyd Jowers confessed to involvement in the assassination of Martin Luther King. In spite of this, the FBI took no steps to investigate him. In 1999, a jury unanimously found him guilty of involvement in the killing, but the FBI still took no action, according to a FOIA response.[33]

An investigation by the Associated Press found that sexual misconduct is a constant problem among ranking agents.[34] 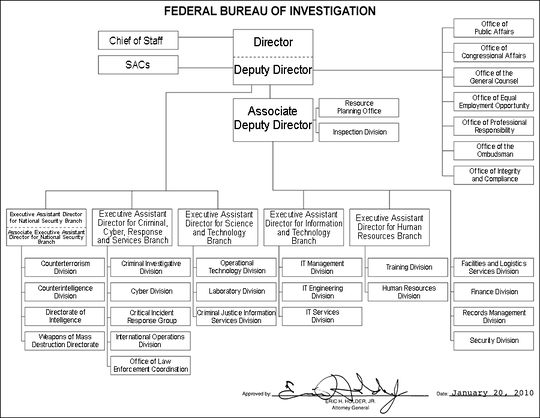 The FBI Directorate of Intelligence used to be part of the NSB but as of 2014 operates as a separate organizational entity within FBI.