From Wikispooks
< MLK
Jump to navigation Jump to search

“If physical death is the price that I must pay to free my white brothers and sisters from a permanent death of the spirit, then nothing can be more redemptive.”
MLK [1] 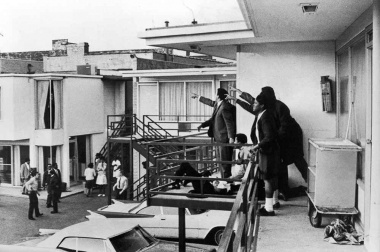 The Lorraine Motel balcony just after the shooting of MLK.

Rev. Dr. Martin Luther King Jr was cut down by an assassin's bullet on 4th April 1968. The murder was originally blamed on "lone nut", James Earl Ray, although he was never tried by a jury, as he entered a guilty plea. Loyd Jowers confessed on television to involvement in his assassination. A 1999 jury ruled in a civil trial that Loyd Jowers as well as [unnamed] "governmental agencies" were involved in his murder. This has proved a thorn in the side of the commercially-controlled media, which have subsequently attempted to imply that the unanimous verdict was in error.[2]

Martin Luther King was show and killed by the "lone nut", James Earl Ray, who plead guilty to forego a jury trial, although he later made many unsuccessful attempts to withdraw his confession and be tried by a jury. The official narrative changed in 1999, with the successful case by the King family. This commercially-controlled media not only ignored this case (only a single, local, reporter was sent) but they quickly suggested that the verdict was suspect - although neglecting to initiate any legal challenge to it. This case illustrates the inconsistency of Wikipedia - since it minimises the importance of the official US government narrative that the courts are a reliable indicator of what has happened, and that therefore the US government was involved in the assassination of Martin Luther King.

Earl Caldwell, a New York Times reporter, has consistently claimed that he thought the shot was fired from bushes below the balcony, not from the boarding house which the FBI claimed.

Dr. King was planning a mass march on Washington to demand the end of the Vietnam War. He had also written in support of a universal income as a measure towards economic justice. Mark Gorton suggests that the corrupt establishment leadership had King killed because they saw him as a threat, having identified him as a potential leader who would not be silenced into covering up their past crimes.[3]

William Pepper has been successful in exposing the involvement of the US deep state in this case.

In a 1999 the King family and William Pepper brought a civil case, seeking damages of $100[4] and the jury ruled unanimously that Loyd Jowers and others, including unspecified "governmental agencies", were all part of a conspiracy to kill Martin Luther King Jr. One juror, David Morphy, said after the trial, "We all thought it was a cut and dried case with the evidence that Mr. Pepper brought to us, that there were a lot of people involved, everyone from the CIA, military involvement, and Jowers was involved."[5]

The bushes below the motel balcony were cut down the day after the assassination, on order of the Memphis Public Works department, a destruction of evidence which was stated on the record at the civil trial.

In 2000 the USDOJ carried out an "investigation" into the verdict which claimed that it was incorrect.

Many documents from the FBI's original investigation into the assassination of Martin Luther King are not due to be released until 2027.[6]

Journalist Gerald Posner suggested in Killing the Dream that the jury had been “spoon fed” the evidence in the MLK Civil trial,[7] and in defiance of their verdict stated "that there was a conspiracy, but on a very low level. Someone, I'd guess part of a racist group, probably agreed to pay him maybe $25,000 or $50,000."[8]