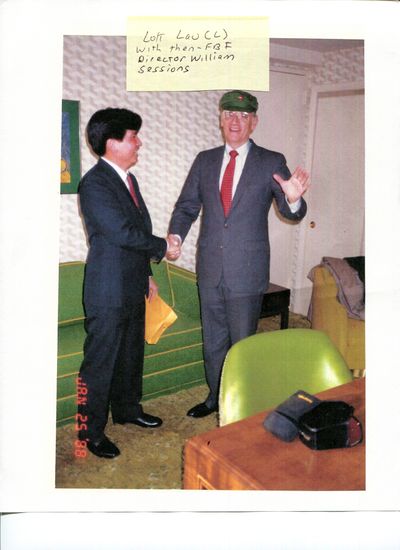 Lok Lau was born in Singapore in 1957. He immigrated to the USA at the age of 19 and moved in with a married sister in Michigan.[2] In 1984 he was recruited by The FBI. Both CIA and FBI tried to recruit Lau since both needed agents fluent in Mandarin and Cantonese. During the preceding years he had handlers from both agencies, suggesting this was a joint operation.[3][2]

Lok Lau began work in the USA as a sheriff’s deputy.[2]

In 2002 Lau filed a motion before the court of the Eastern district of California in which he stated that he has been recruited by US intelligence in 1984.[3] Regarding his activities as intelligence asset it was stated: "From a reading of the record, it is not difficult to discern that Lau was involved in espionage activities, kidnappings, trading in human slavery, illegal immigration, murder, torture, kidnapping, extortion, hostage taking and any number of other criminal activities that involved crimes against humanity, then and now, in his undercover work. Lau 'penetrated' the Chinese Triads, the Tong and other Chinese Organized Crime Organizations that trade in all of these things as a way of life. There is no way that Lau could have performed his undercover so well that he received awards and other forms of recognition were that not so". This activity in turn, according to Bill Conroy, was "a path into the highest reaches of government power. In this case, they gave the FBI spy access to China's intelligence apparatus, allowing him to gather intel and cultivate human assets for U.S. intelligence agencies."[4] When in 2003 a reporter for the San Antonio Business Journal called the US Attorney's Office in Sacramento and asked for a comment on a declaration Lau had made in the case,[5] the Justice Department argued on national-security grounds to black out every mention of Lau's work in China from court documents and in addition, wanted to seize any computers that might have a copy of Lau's description of his work on their hard drives to erase them.[1]