Loyd Jowers was a bar and grill owner involved in the MLK assassination. In spite of admitting this, and being found guilty by a US jury in a civil trial, the only investigation by the FBI was a single interview 3 days after the assassination.

Loyd Jowers confessed in a TV interview on Prime Time Live on 16 December 1993, to involvement in the assassination of Martin Luther King,[1] stating that he was paid $100,000 by a Memphis produce merchant with Mafia connections, Frank Liberto, to arrange an assassin to kill King.[2] He hired a Memphis police officer[Who?] to kill Dr. King from the bushes behind his restaurant. The USDOJ report that "we attempted to interview Jowers, but he refused to speak with us. ".[1] According to a FOIA request by MuckRock his confession did not prompt any investigation by the FBI.[3]

Jowers was charged in 1998 with involvement in the MLK assassination. Jowers' own layer did not deny that his client was involved in the conspiracy to kill King. He said he agreed with 80 percent of William Pepper's evidence and disagreed only on the extent of his client's involvement. In his closing speech of the civil trial, Mr. Garrison repeated his claim that Jowers had participated in the conspiracy, but was unaware that the plot was intended to kill Dr. King.[4] He was found guilty by a unanimous jury verdict. 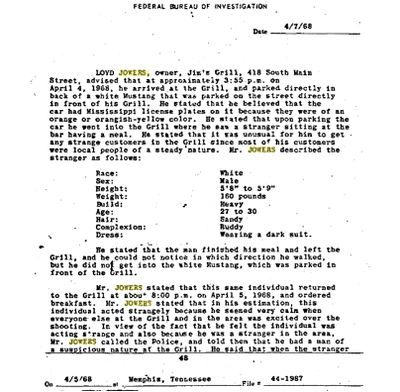 A FOIA request by Muckrock established that in spite of his confession of involvement in the MLK assassination, and the verdict of the jury, the FBI reported having no records about him beyond a single page pertaining to his interview 3 days after the MLK assassination. In 2017, Emma Best termed the FBI's lack of interest in Loyd Jowers "alarming".[3]