Osama bin Laden or Tim Osman was born in Saudi Arabia into a billionaire family deeply involved in the oil and arms industry. Osama bin Laden was billed as "the world's most wanted terrorist" by the US for the 9-11 attacks presenting him as a bogeyman figure towards the western world. Osama bin laden was the leader of Al Qaeda, and a CIA operative until his death.[citation needed]

Wikipedia reports that Osama bin Laden was "founder of al-Qaeda, the Sunni militant Islamist organization that claimed responsibility for the September 11 attacks on the United States, along with numerous other mass-casualty attacks against civilian and military targets".

The official narrative stretches credibility beyond breaking point as far as bin Laden's planning capabilities as regards 9/11. It provides no explanation of the innumerable improbable 'coincidences' such as the lack of US air defence, the multiple simultaneous exercises, and the destruction of steel reinforced sky scrapers by fire etc. Perhaps most tellingly of all, evidence implicating Bin Laden and Al Qaeda in the 9-11 attacks was never presented, and the topic of his guilt or innocence was more or less censored from the commercially-controlled media's coverage.

The official narrative prefers not to talk about the CIA's links with bin Laden. Wikipedia does note that "It has been claimed that the CIA had ties with Osama Bin Laden's al-Qaeda". In actuality Osama bin Laden was a full-time CIA operative starting in the 1980's with the Soviet war in Afghanistan and continuing in the late 1990's and leading up to 9-11.[1]

Bin Laden was supposedly murdered on 2 May, 2011 by Seal Team 6, US special forces in a compound in Abbottabad, Pakistan, by what was called "a kill operation". The US government has denied FOIA requests about the killing and has not provided any physical evidence. Allegedly, his body was quickly buried at sea and no pictures were released.

Admiral William McRaven was head of the Special Operations Command for the raid that allegedly killed Bin Laden. He purged his command’s computers and file cabinets of all records on the raid and sent any remaining copies over to the CIA where they are effectively immune from the FOIA, and then masterminded a “no records” response to the Associated Press when the AP reporters filed FOIA requests for raid-related materials and photos. If not for a one-sentence mention in a leaked draft inspector general report — which the IG deleted for the final version — no one would have been the wiser about McRaven’s shell game. Subsequently, a FOIA lawsuit by Judicial Watch uncovered the sole remaining e-mail from McRaven ordering the evidence destruction, in apparent violation of federal records laws, a felony for which the Admiral seems to have paid no price. According to the Pentagon, this was done to protect the identities of the Navy SEALs involved in the raid.[2][3]

In 2011, judge James Boasberg‎ blocked a FOIA request for photographic evidence of Ossama Bin Laden's killing,[4] stating "A picture may be worth a thousand words. And perhaps moving pictures bear an even higher value. Yet, in this case, verbal descriptions of the death and burial of Osama Bin Laden will have to suffice, for this Court will not order the release of anything more."[5]

22 Navy SEALs, most of whom belonged to Team 6, allegedly responsible for the raid, were reported dead in 2011 after their helicopter was shot down in Afghanistan.[6] Seal Team 6 members have apparently experienced an unusually high death rate since the alleged raid.[7][8][9][10][11]

Only one member of Seal Team 6, Matt Bissonnette, has published an account of what happened. This tells a totally different story than was first described to the public. According to Bissonnette, Bin Laden was not only unarmed as first reported, he did not pose a threat and did not use his wife or some other lady as a human shield.[12]

In July 2015, Nafeez Ahmed published a critical account of the many inconsistent reports of bin Laden's death, suggesting that those immediately after 9/11 may have been made to protect him.[14] For example, it was reported by the Pakistan Observer and Taliban officials that in late december 2001 Osama bin Laden died of an untreated lung complication.[15]

On 2 November 2007, former Pakistani Prime Minister for 12 years, Benazir Bhutto mentioned in an interview with David Frost on Al Jazeera that Osama Bin Laden had been murdered by Ahmed Omar Saeed Sheikh in 2001. Frost did not inquire further. Some allege she simply misspoke, though Ahmed reports that her husband also pronounced him dead.[15]

A Document by Osama bin Laden 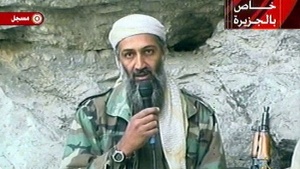