John Mann, Baron Mann of Holbeck Moor, is a British politician who was the Labour Member of Parliament for Bassetlaw since the 2001 General Election.[1]

In September 2019, Mann announced his resignation as an MP at the next General Election to focus on the role of antisemitism tsar,[2] which former PM Theresa May created for him, and expected to be based in the Tory government’s Ministry of Housing, Communities and Local Government.[3]

John Mann was elevated to the House of Lords in Theresa May's Resignation Honours List 2019,[4] resigned his House of Commons seat on 28 October 2019[5] and intends to sit as an independent peer.[6]

John Mann served on the Treasury Select Committee and chairs the All-Party Parliamentary Group against Antisemitism.[7] The Group commissioned the All-Party Parliamentary Inquiry into Antisemitism in 2005. The inquiry panel, chaired by former Europe Minister Denis MacShane, gathered written and oral evidence on antisemitism in Britain and published a report of their findings on 7 September 2006. The panel's recommendations included improved reporting and recording of antisemitic attacks; a crackdown on anti-Jewish activity on university campuses; and improved international co-operation to prevent the spread of racist material online. In May 2009 John Mann received the American Jewish Committee's Jan Karski Award in recognition of his commitment to fighting antisemitism in all of its forms.[8]

At the 2010 General Election, John Mann appealed for funds to defeat the Tories on the basis that:

John Mann, according to his appeal for funds, asserted that he was resented because he was not touched by the expenses scandals. He was entirely impossible to corrupt, either financially or politically. He had stood up for his largely working class constituents fearlessly and he had stood up against antisemitism in the same way. Money was needed urgently to fund his campaign. The threshold for publication of donations was £200 and donors had to be registered to vote. Donations over £1500 (to one or more than one candidate) had to be disclosed and donations over £7,500 published.[9] 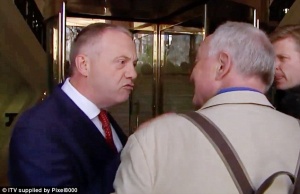 Bringing the Labour Party into disrepute

On 28 April 2016, Mann publicly accosted Ken Livingstone over his comments defending a tweet by Muslim MP Naz Shah when he claimed that Hitler "was supporting Zionism before he went mad and ended up killing six million Jews". Mann publicly accused Livingstone of being a "Nazi apologist" and a "fucking disgrace".[10] Following this incident, Mann was reprimanded by Labour's chief whip Rosie Winterton, with party spokesperson saying that she had told Mann that it is "completely inappropriate for Labour members of Parliament to be involved in very public rows on the television".[11] Ken Livingstone was suspended from the Labour party in relation to his earlier comments.[12] On an unrelated issue, six months earlier, Mann had repeatedly called Livingstone a "bigot" in a radio phone-in, following a controversy over Livingstone remarking that MP Kevan Jones was "obviously very depressed and disturbed".[13]

Following his outburst at Livingstone, an online petition accusing Mann of "appallingly unprofessional and toxic behaviour" and calling for him to be subject to a "disciplinary procedure" gathered over 21,000 signatures in seven days.[14]

"Appallingly unprofessional and toxic behaviour to a fellow respected Labour party member. Regardless of the argument - the harassment was totally opportunistic and beyond reprehensible. You are not at liberty, Mr Mann, to single-handedly bring the Labour Party into disrepute."[15]

The following month, John Mann wrote in The Jewish Chronicle:

"If Labour cannot combat racism then we are nothing – and racism always includes antisemitism. If we cannot do that now, then we have no reason to exist".[16]

It is with a sense of deep distaste personally, and an even deeper concern for the future of our freedom of speech, generally, that I have viewed your recent antics. In my opinion, your behaviour appears both narcissistic and attention-seeking, in the extreme. Whether it is at a level at which one could view it as pathological, I am not sufficiently qualified to say, but it is my view that ‘the man on the Clapham omnibus’ may, reasonably, harbour suspicions.

Your ambush of Ken Livingstone, with pre-arranged media presence is a case in point. Any less reasonable man may have told you to ‘clear off’. Instead he tried, in a calm manner, to point out the historical evidence to support what he had said. His words fell on (your) deaf ears, for you, of course, had decided already that he ‘would float if you threw him in the river’ (the test applied, historically, vis a vis witchcraft). Cynical observers too, may, possibly, take the view that you are attempting, on behalf of others, to airbrush history, in the name of anti-Semitism.

Are you not aware of the potential of historical resonance here? Let’s, for the sake of argument, turn history on its head and assume that the Nazis had won WWII. You can imagine, can you not, that they would want to stamp out any reference to the ‘Final Solution’? After all, political opponents in actual historical fact had already gone to the extermination camps, along with the mentally ill, those with learning difficulty, Roma and the Jewish community. So, one might imagine that the Nazis might encourage the denunciation of those who would wish to speak the truth, as ‘Jew lovers’ and make them targets for ‘neutralisation’. Do you take my point? Thankfully, such a situation never came about, thanks to the sacrifice of over 400,000 people, including my own brother, (and many more from other nations) who gave their lives to preserve our freedom of speech.

Let me now refer to matters In connection with Jackie Walker, the former vice-chair of Momentum and with whom we share membership of the Labour Party. I do not wish to refer to the specifics of the matter as her appeal against suspension from the Party is pending, (although the issue of the circumstances of her ‘entrapment’ and ‘denunciation’, are deeply worrying to me). However, your comments that all Labour members who supported her “should be expelled from the Party,” which were reported in the media, absolutely appalled me. The implied ‘guilt by association’ is akin to the ‘fellow traveller’ accusations made during the McCarthyite era in the USA. Shame on you.

There seems to be a desire, on your part, to conflate (i.e. run together as if they represent the same meaning), the words and concepts of anti-Zionism and anti-Semitism. Or perhaps you are just confused? I never have been. To me anti-Zionism represents political opposition to a style of social and political expression stemming from a particular religious interpretation of Judaism. Anti-Semitism, on the other hand, refers to a dislike of Jews, which is rooted in the same xenophobic soil as other forms of racism. When this is openly displayed, we, in Britain have anti-discrimination laws, including those relating to hate speech. Now...the application of and efficacy of our legislation is a matter open for debate and is something you can, potentially, influence as an MP. Why then, at this present time, are you focusing your attention on the Labour Party?

That brings me to the issue of the political motivation for your actions. It has been suggested that your prime motivation, given your position on the right-wing of the Labour Party, is to attempt to undermine the leadership of Jeremy Corbyn and all that he stands for. I was a committed and experienced member of the Socialist Medical/Health Association (affiliated) since 1946 and have been a member of the Labour Party since 1972, or thereabouts. As such, I find it difficult not to agree with such a conclusion, in the current circumstances. No doubt your fairly regular visits to Israel (as a consequence of your documented links with organisations and individuals there) must be enjoyable for you on a personal level, but would not, surely, be sufficient incentive, in of themselves?

No.... my view is that, to use military terms, you represent a sniper with a long range rifle, ‘softening up’ the enemy, causing confusion in the opposing ranks, picking off individuals and making people afraid of putting their head above the barricades. You are, however, in my view, waiting for your ‘General’ a.k.a. Tony Blair to come and rally the troops for a counter-offensive. I admire your loyalty to him, but would point out that he doesn’t have an awfully good record militarily. That poor record had quite a lot to do with the allies he chose, or was coerced by (in that regard it was interesting to see Mr Blairs’ presence, almost as if he were still a head of state, at the recent funeral of Shimon Peres, in Israel).

So there we have it....I have concern about the nature of your personal behaviour: I am a Corbyn supporter, and have great sympathy with the situation of Ken Livingstone and Jackie Walker, to whom I offer my solidarity: I am also not afraid to look to history for lessons and I view your actions as being ‘McCarthyite’ in nature: I refuse to conflate anti-Zionism and anti-Semitism and I see through your cloak of justification and heap scorn upon your underlying political motivation......

So, please feel free to denounce me, though, I suspect, that you lack the moral and political courage to do so.

Throughout my 90 years, I have always held to a belief in the essential goodness of people. That belief has been severely tested in recent times, as I have witnessed your machinations and those of the Labour PLP.

Today, the mere demands of day to day living tax me greatly, but with all the energy I can muster, at the age of 90 years, I offer you, Sir, unfortunately, not fraternal wishes, but my heartfelt derision.