The Taliban Islamist movement and military organization in Afghanistan. Estimates of manpower vary, some have put it as high as exceeding 200,000 men (2017).[1] From 1996 to 2001, the Taliban held power over roughly three-quarters of Afghanistan, and enforced a strict interpretation of Sharia, or Islamic law.

The Taliban emerged in 1994 as one of the prominent factions in the Afghan Civil War and largely consisted of students (talib) from the Pashtun areas of eastern and southern Afghanistan who had been educated in traditional Islamic schools, and fought during the Soviet–Afghan War. Under the leadership of Mohammed Omar, the movement spread throughout most of Afghanistan, shifting power away from the Mujahideen warlords. The Islamic Emirate of Afghanistan was established in 1996 and the Afghan capital was transferred to Kandahar. It held control of most of the country until being overthrown after the American-led invasion of Afghanistan in December 2001 following the September 11 attacks. At its peak, formal diplomatic recognition of the Taliban's government was acknowledged by only three nations: Pakistan, Saudi Arabia, and the United Arab Emirates. The group later regrouped as an insurgency movement to fight the American-backed Karzai administration and the NATO-led International Security Assistance Force (ISAF) in the War in Afghanistan. 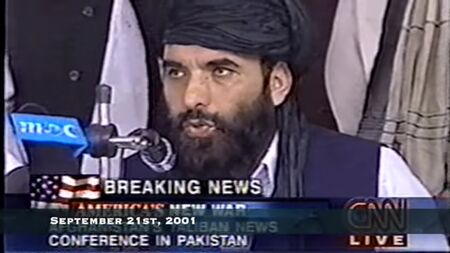 A spokesperson asked about the extradition of Ossama Bin Laden in 2001, shortly after the September 11 attacks: "Our position in this regard is [...] that if America have evidence and proofs, they should produce it and we are ready for the trial of Ossama Bin Laden in the light of evidence."[2] This message was the stand of the Taliban before the US invasion.[3][4] The offer was rejected by Bush shortly thereafter.[5] On 11 Sep, 2011 Aljazeera published a report based on information offered by Wakil Ahmad Muttawakil, that even before 9-11 there were proposals to put Bin Laden in a court that is under the supervision of the Organisation of the Islamic Conference for his involvement in plots targeting US facilities during the 1990s (like the USS Cole attack).[6] The US had no interest. (these negotiations were known for years)[7]

They took back control of Afghanistan in 2021. They vow to protect portrait of the Queen found in British Embassy until UK recognises them as the new government.[8]

A Taliban victim on Wikispooks