Orwellian language is language chosen to hide the truth, especially language which inverts the truth.

The phrase is a refence to George Orwell's Nineteen Eighty Four, a dystopian novel about a totalitarian superstate which uses perpetual war against one or both of its two competing superstates to keep the large majority of its population in poverty and ignorance. 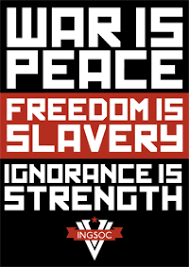