From Wikispooks
(Redirected from Norwegian)
Jump to navigation Jump to search

Norway is the most northerly European nation state.

In 2020 Norway has been aggressively pushing supranational deep state policies.

Reportedly expected to be finalized in June 2020, the Norwegian secret services are legally allowed to perform mass collection of metadata that crosses the borders to Norway. The information will be stored for 18 months, to "identify foreign threats"and "find digital clues to the co-conspirators" in Norway, said parliamentary committee leader Michael Tetzschner. The Norwegian Data Protection Authority criticized the law heavily, and stated "This will generate huge amounts of data about almost all Norwegian citizens, about our everyday, legal and ordinary communication, for the use of the intelligence service".[1]

The Corona Commission reviewing the decision to lock down the country in March 2019 against Covid-19, will have a 60 year confidentially clause.[2] Originally the government wanted an extended 100 year confidentially clause, but relented, and agreed to the standard 60 year clause "for personal matters, as well as operational and trade secrets." This wish for secrecy have led journalists' union to point it fits a pattern, that the journalists "have struggled to gain access during the pandemic, and the duty of confidentiality has been used as a pretext to withhold important knowledge and block free public debate.[3] In November 2020, Norway’s National Institute for Public Health estimated that "The lethality rate for COVID-19 in Norway is 0.12%”.[4]

"An important part of Norwegian history does no longer exist"

Ministerial Councilor Bjørn-Inge Larsen in the Ministry of Health was one of the key people when the major decision on lockdowns were made. According to a previously secret letter the Corona Commission received from the ministry last autumn, it is confirmed that all SMSs to Bjørn-Inge Larsen were deleted.

Minister of Health Bent Høie stated to media that all contact he had with Health Director Bjørn Guldvog until the decision to lock down was made on March 12, 2020, went via Larsen. Thus, an important part of the most dramatic days in Norwegian history is no longer possible to document. As much of the communication between the key people happened via SMS, and these have now been deleted for good, it will be almost impossible to reconstruct and verify what was communicated in these fateful days.

The reason for the deletion is to be "technical problems with receiving SMSs from the mobile phones of Ministerial Councilor Bjørn-Inge Larsen", as well as limited storage of mobile data.

If that was not enough, it turns out that the notes of health director Bjørn Guldvog are also gone, according to a meeting minutes that Aftenposten has had access to. Guldvog regrets this, and refers to many loose notes that were not systematized under strong time pressure. In hindsight, he realizes that this was unwise.[5][6]

The deletion of documentary evidence is similar to what happened in Denmark.

In November 2020, the Norwegian legislature adopted (without a vote) a criminal law to punishes people for "hate speech" toward transgender people, including in their own home or private conversations.[7] 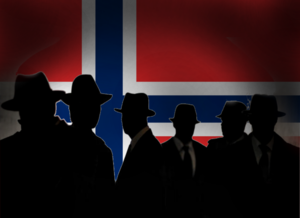 The Norwegian Deep state was connected to the Norwegian Shipowners' Association, set up in 1909.[clarification needed] After the country was occupied by Germany during World War II, resistance leader Jens Christian Hauge emerged as a post-war deep politician. He was Norwegian Minister of Defence from 1945-1952.

After "one of the largest child sex abuse cases in history", Norwegian police announced in November 2016 that a year-long special investigation entitled “Operation Darkroom” had resulted in the seizure of 150 terabytes of photos, movies and chat logs containing atrocities against young children. The Washington Post briefly reported on the story,[8] but later withdrew the page. Over 50 people are accused, including “highly educated” individuals, including two former or current elected politicians, one teacher, a lawyer and a police officer.[9]

Citizens of Norway on Wikispooks