The organization was founded on 15 September 1909, under the name The Norwegian Shipowner Association, and changed to its current name in 1984. The Association's first president was Christian Michelsen, independent Norway's first prime minister and shipowner.

Norway has long played an important role in international shipping industry. Through their interest in world trade, the shipowners developed close ties, both economic and ideological, to the business center of London, and later to the US.

The organization played an important role in the negotiation of shipping contracts with the United Kingdom in World War and World War II and several of the association's members were driving force in the organization of the Nortraship, the management company for the Norwegian merchant fleet outside German control when the country was occupied.

Some shipowners collaborated with the German authorities, but most chose the British side.

After WW2, the association has closely identified with free trade and UK/US interests.

The Association played a vital role in supplying Apartheid South Africa with oil in the 1980s, despite protests from the Norwegian government.[citation needed] 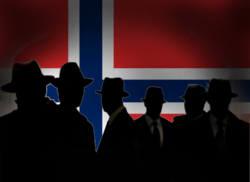 The Norwegian stay behind network (Gladio) was originally set up as an informal network by some shipowners and their business associates in 1946, to monitor political opponents and prepare armed actions. The network was later reportedly merged with government efforts.[citation needed] During a police raid in 1978, a large cache of weapons and explosives, part of the Stay Behind network, was found in a secret basement under the house of shipowner Hans Otto Meyer.[1]

Q: It is strange to think that shipowners ruled this country at the turn of the century.

Fredriksen: "By the end of the century shipowners will again rule the country, of that I am convinced. You just wait and see.