The University of Bergen (Universitetet i Bergen) is a public university located in Bergen, Norway. The university today serves approximately 17,000 students, and is one of eight universities in Norway. 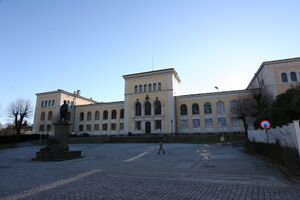 Although the university was founded as late as 1946, academic activity had taken place in Bergen since the founding of Bergen Cathedral School in 1153, the Seminarium Fredericianum in 1750 and the establishment of the Royal Norwegian Naval Academy in 1817. Academia and higher education would also be significantly advanced in the city with the establishment of Bergen Museum, later renamed University Museum of Bergen, in 1825. Founded by Wilhelm Frimann Christie and Jacob Neumann, the museum became a venue for both research and education specialized on natural science, and featured prominent researcher like Michael Sars, Daniel Cornelius Danielssen and Fridtjof Nansen.[1]

Bergen would eventually become a city with several arenas for higher education and research with the Geophysical Institute being established in 1917, the Chr. Michelsen Institute in 1930, the Norwegian School of Economics in 1936 and finally the university in 1946.[2]