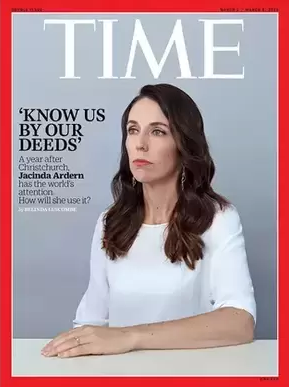 As part of an obvious PR-campaign, Adern has received gushing front pages in central opinion-creating media

Jacinda Ardern was the Prime Minister of New Zealand, for the Labour party from 2017 to 2023. Since her time working for Tony Blair in London, she enjoyed a rocket career in New Zealand politics. After she took over as PM in 2017, she was soon feted by the rich and powerful around the world. As PM, she led the ongoing 2020- waves of lockdowns, removing most civil rights and virtually banned international travel to and from the island nation.

Journalist: 'You've basically said, and you probably don't see it like this, but two different classes of people if you're vaccinated or unvaccinated. If you're vaccinated you have all these rights'
Ardern responded enthusiastically, nodding along as she replied: 'That is what it is.'[1]

On 19 January 2023, Ardern announced her resignation as Prime Minister.[2]

The Guardian wrote: "Over the past year, Ardern has faced a significant increase in threats of violence, particularly from conspiracy theorist and anti-vaccine groups infuriated by the country’s vaccine mandates and Covid-19 lockdowns. She said, however, that the increased risk associated with the job were not behind her decision to step down."

Ardern joined the Labour Party at the age of 17, and became a senior figure in the Young Labour sector of the party.

Adern attended the University of Waikato, graduating in 2001 with a Bachelor of Communication Studies (BCS) in politics and public relations. After college, Ardern began her career as a researcher in the office of Prime Minister Helen Clark.

She spent he year 2005 in New York, where she according to the official biography "worked in a soup kitchen"[3] (one can presume this was a sideline while doing something else that is not disclosed).

Ardern then spent several years in London as a civil servant working for Tony Blair during his final years as PM.

In early 2008, Ardern was elected as the president of the International Union of Socialist Youth, a role which saw her spend time in several countries, including Jordan, Israel, Algeria and China.[4]

Ahead of the 2008 election, Ardern was ranked 20th on Labour's party list. This was a very high placement for someone who was not already a sitting MP, and virtually assured her of a seat in Parliament. Accordingly, Ardern returned from London to campaign full-time.[5] She also became Labour's candidate for the safe National electorate of Waikato.

Ardern was unsuccessful in the electorate vote, but her high placement on Labour's party list allowed her to enter Parliament as a list MP. Upon election, she became the youngest sitting MP in Parliament. Opposition leader Phil Goff promoted Ardern to the front bench, naming her Labour's spokesperson for Youth Affairs and as associate spokesperson for Justice (Youth Affairs).[6]

Ardern stood again in Auckland Central at the 2014 general election. She again finished second though she increased her own vote a bit.[7] Ranked 5th on Labour's list Ardern was still returned to Parliament where she became Shadow spokesperson for Justice, Children, Small Business, and Arts & Culture under new leader Andrew Little.

Ardern put forward her name for the Labour nomination for the 2017 Mount Albert by-election, a very safe Labour seat, to be held in February 2017[8], It followed the resignation of David Shearer on 8 December 2016. When nominations for the Labour Party closed on 12 January 2017, Ardern was the only nominee and was selected unopposed. On 21 January, Ardern participated in the 2017 Women's March, a worldwide protest in opposition to Donald Trump, the newly inaugurated president of the United States.[9] Ardern won a landslide victory, gaining 77 per cent of votes cast in the preliminary results.[10]

Following her safe win in the by-election, Ardern was unanimously elected as deputy leader of the Labour Party on 7 March 2017, following the resignation of Annette King who was intending to retire at the next election.[11]

On 1 August 2017, just seven weeks before the 2017 general election, Ardern assumed the position of leader of the Labour Party, and consequently became leader of the Opposition, following the resignation of Andrew Little. Little allegedly stood down due to the party's historically low polling.[12] Ardern was unanimously confirmed in an election to choose a new leader at a caucus meeting the same day.[13]

At 37, Ardern became the youngest leader of the Labour Party in its history. She is also the second female leader of the party after Helen Clark. According to Ardern, Little had previously approached her on 26 July and said he thought she should take over as Labour leader then as he was of the opinion he couldn't turn things around for the party, although according to Ardern, she declined and told him to "stick it out".[14]

During the 2017 general election held on 23 September 2017 Labour received 36.89 while National 44.45. Labour gained 14 seats, increasing its parliamentary representation to 46 seats. This was the best result for the party since losing power in 2008. On 19 October 2017, New Zealand First leader Winston Peters agreed to form a coalition with Labour, making Ardern the next prime minister. This coalition receives confidence and supply from the Green Party.

After 51 people were fatally shot and 49 injured in two mosques in Christchurch on 15 March 2019, her government introduced stronger firearms regulations, banning all military-style semiautomatic weapons, all high-capacity ammunition magazines and all parts that allow weapons to be modified[15].

"Her face has graced magazine covers all over the world. Her leadership style has been studied by Harvard scholars. Her science-and-solidarity approach to the coronavirus has drawn legions of fans in other countries who write to say, “I wish you were here.” The global left (along with a chunk of the center) has fallen hard for Prime Minister Jacinda Ardern of New Zealand, giving her a prodigious presence for a leader who manages a smaller population than many mayors do. Now her country’s voters have come around as well."

CNN wrote in October 2020:[17] "She's seen variously as every voter's sister or best friend or mother or girlfriend. That only added to her regular-woman appeal. Despite her international star power, Ardern continues to present herself as no different from anyone else. While in Auckland, she lives in a modest house with a back deck that was built by Gayford. On Instagram, sandwiched between numerous political posts, she shared a Neve artistic masterpiece, a homemade rabbit-shaped birthday cake, and a makeshift desk at her parents' house that no one would have guessed was a world leader's office." 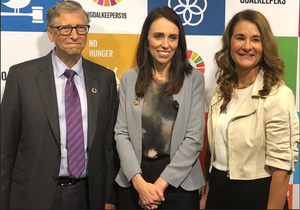 Praise from the Gates

On June 17th, 2020, PM Adern met with Melinda Gates via teleconference, upon the latter’s request. The outline of the meeting was released under the Official Information Act (OIA).[18]

In the teleconference, Melinda Gates said "the US, and the world, saw New Zealand's response and PM Ardern's leadership as an exemplar," according to official records of the meeting. Talking points for the meeting, also released under the OIA, show Ardern planned to push for the "equitable distribution" of a future Covid-19 vaccine, especially worrying that women from the smaller Pacific Island nations might not be reached by it.

Ardern, presumably on medical advice, asked whether "a 12-18 month timeframe to a vaccine was optimistic," but was told by the world's richest woman that "If they went into manufacturing 'super-quick' then maybe in Q1 of next year there might be some vaccines available," and asked Ardern to "push for" a global vaccine.

The teleconference was not the first time Gates and Ardern have met. The Prime Minister met Melinda Gates and her husband, Microsoft founder Bill Gates and spoke on stage with them, during a trip to New York City in 2019, for the Bill and Melinda Gates Foundation's third annual Goalkeepers event. The event convenes global leaders, also including Spanish Prime Minister Pedro Sanchez and other emerging and established leaders from around the world, to recognize the progress that has been made in global health and development.[19]