An unconditional basic income is given to citizens of a country because they are citizens, not conditional upon other qualifications. In that sense it is different from the idea of the much discussed universal basic income (UBI), which can easily be made depending on certain factors. 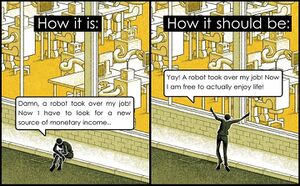 A majority of the public in several countries support the introduction of an unconditional basic income, including France.[1]

Switzerland had a referendum on the topic in 2016 which rejected a UBI. Finland and Spain were conducting trials as of 2018.[2]

Iran was the first country to introduce a national basic income. Since Autumn 2010 it has paid an income to all citizens and replace the decades long system of subsidies of petrol, fuel, and other supplies. In 2012, the sum corresponded to about 40 U.S. dollars per person per month. 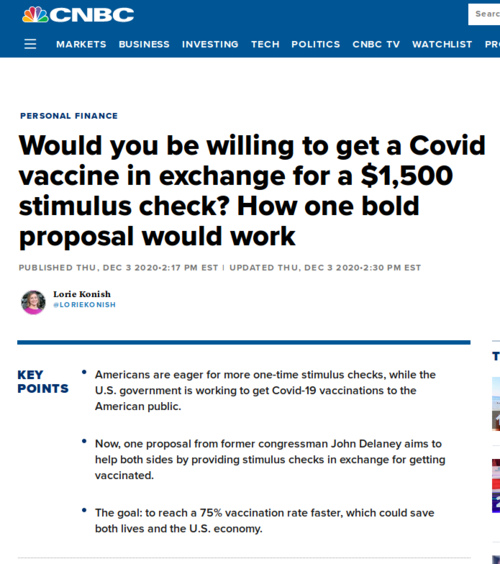 The 20/80 society is a projected society of the 21st century. 20% of the population will be enough to keep the world economy going. The other 80% live on some form of welfare.[citation needed]

With the Corona crisis and resulting economic struggles it is rather likely for UBI to find even more acceptance in the societies of strongly affected nations. At the same time it stands to reason that the unconditionality of it will be dropped and pay-out at one point in the future will be connected with compliance in receiving vaccinations to combat all current and upcoming viruses.

The institutions of global capitalism have taken a positive interest in introducing Basic Income. It has probably been discussed at the Bilderberg meetings ('The inequality challenge'). The World Economic Forum[3] has discussed it, even though the Basic Income these groups envisage has more the feel of the workhouse[4] than liberation. The Great Reset appears as what could be a major push in that direction.

“Covid-19 is the catalyst for the Great Reset, in which universal basic income plays a securing role. Universal Basic Income (UBI) is the strategic solution to protect the ruling classes from Molotov cocktails and global civil unrest by those being methodically dispossessed of their occupations, dignity and self-preservation – the working class, much middle class, peasantry, artisans, and those that comprise the informal economy that presides in the Global South. Disclosures on coming “disbanding of existing safety-net programs” are not included in the foundation-funded marketing campaigns.”
Cory Morningstar [5]

“When UBI begins to be rolled out globally, one can expect public healthcare to slowly disappear, replaced by privatized services (largely Telehealth). Further, UBI payments will be linked to benefits via blockchain – ensuring full spectrum compliance and servitude of whole societies. Billionaires are supporting/financing UBI marketing campaigns for good reason: it is preferable to pay a pittance to the citizenry than to risk losing the social license that allows for the continued decimation of the Earth, coupled with the continued exploitation of those most oppressed and vulnerable.”
Cory Morningstar [5]

In the TV series The Expanse, UBI is the standard income and most people are poor. Those with a job can be threatened that they are back on basic-income at the end of the month if they do not follow orders.