Global Alliance for Vaccines and Immunization

Gavi, the Vaccine Alliance[1] (GAVI) is a public–private global health partnership committed to "healthy markets for vaccines and other immunisation products"[2], by increasing access to immunisation in poor countries. Most partners in the alliance are pharmaceutical companies, or are directly or indirectly sponsored by big pharmaceutical companies, making it a front organization to facilitate the sales of drugs and vaccines, a lucrative business.

UK Prime Minister Boris Johnson, who co-chaired the vaccine summit in June 2020 with Bill Gates, described the GAVI vaccine alliance as a kind of “health NATO”.[3]. The Gates Foundation describes Gavi as a "partner in vaccine market shaping".[4]

Present (2020) WHO leader Tedros Adhanom Ghebreyesus was formerly on the board of GAVI. 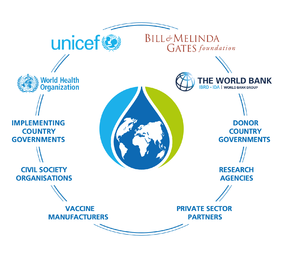 The founders were the Bill & Melinda Gates Foundation,UNICEF,the World Health Organization (also to a large extent funded by Bill Gates, and the World Bank[5] It was founded in January 2000 at a summit of the World Economic Forum in Davos.[6]

Former variations of the name include the GAVI Alliance, and before that the Global Alliance for Vaccines and Immunization.

The Bill and Melinda Gates Foundation has donated $1.56 billion to the alliance's 2016-2020 strategic period, as of March 2019. Other big donors include the Norwegian and British governments.

In May 2019, Seth Berkley, CEO of GAVI stated that "doubts about vaccines have spread across social media like a disease and false information that “kills people” should be taken down by the companies running digital platforms". Stating that there was a "strong scientific consensus about the safety of vaccines", he said skepticism should be though of as a disease. "This is a disease,” Berkley said. “This spreads at the speed of light, literally.” Misinformation about vaccines, which the WHO says save two million lives annually, was not a freedom of speech issue and social media firms need to take it offline, Berkley said.[7]

When Julian Lob-Levitt, a British medic and GAVI's CEO, in 2004 suggested diverting some of GAVI's vaccine funding to health systems, it created vehement opposition. The Norwegian and British Governments, both major donors to GAVI and traditionally known to support a health systems approach, backed this recommendation. It was, however, strongly resisted by many powerful actors in the opposing ‘camp’ of GAVI's Board, including the US Agency for International Development (USAID), senior vaccination experts and, not least, the Bill & Melinda Gates Foundation.

This page imported content from Wikipedia on 21 April 2020.
Wikipedia is not affiliated with Wikispooks.   Original page source here
Retrieved from "https://wikispooks.com/w/index.php?title=Global_Alliance_for_Vaccines_and_Immunization&oldid=231010"
Category: