Bird flu known formally as Avian influenza is a variety of influenza caused by viruses adapted to birds.[1][2] The type with the greatest risk is Highly Pathogenic Avian Influenza (HPAI).

Though influenza A is adapted to birds, it can also stably adapt and sustain person-to-person transmission. Recent influenza research into the genes of the Spanish flu virus shows it to have genes adapted from both human and avian strains. Pigs can also be infected with human, avian, and swine influenza viruses, allowing for mixtures of genes (reassortment) to create a new virus, which can cause an antigenic shift to a new influenza A virus subtype which most people have little to no immune protection against. 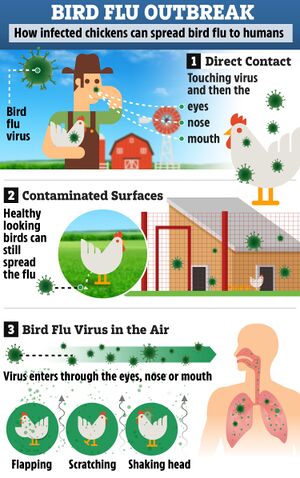 On the eve of the UK/2019 General Election the The Sun newspaper of Wednesday 11th December 2019 headlined a warning: "Devastating outbreak of flu-like illness could kill 80 million people across the world in less than two days, experts warn".

How does it affect humans?

Bird flu is unique in that it can be transmitted directly from birds to humans.

Infected birds shed the virus in their saliva, mucous and faeces so it can infect people if it gets into the eyes, nose, mouth - or even inhaled.

This might happen when virus is in the air - in droplets or possibly dust - and a person breathes it in, or when a person touches something that has the virus on it and then touches their mouth, eyes or nose.

Most Bird flu infections in people have happened after unprotected contact with infected birds or contaminated surfaces.

But in some cases no direct contact has been reported.

No human Bird flu infections have been reported from proper handling of poultry meat or from eating properly poultry products and it can't be passed from person to person.

However, if the virus mutates into a form that can be passed between humans, it could result in the infection spreading rapidly across the globe.

This happened during the great influenza pandemic of 1918/19 when a new influenza virus subtype emerged and killed around 50million people in six months when it spread around the world.

How can you prevent bird flu?

It's important to note that the seasonal flu vaccine doesn't protect against Bird flu.

Those who work with chickens or are visiting a country that has had a recent outbreak should wash their hands often and avoid contact with live birds and poultry.

Cooking with different utensils for cooked and raw meat, and making sure it's cooked until steaming hot will help prevent catching the virus.

Health bosses also warn people not to go near or touch bird droppings or sick and dead birds.

What are the symptoms?

The main symptoms of bird flu can appear very quickly and include:

Other early symptoms may include:

It usually takes three to five days for the first symptoms to appear after you've been infected.

Within days of symptoms appearing, it's possible to develop more severe complications such as pneumonia and acute respiratory distress syndrome.

Call a GP or NHS 111 if you experience any symptoms of bird flu and have visited an area affected by Bird flu in the past 10 days.[5]

This page imported content from Wikipedia on 19 May 2020.
Wikipedia is not affiliated with Wikispooks.   Original page source here
Retrieved from "https://wikispooks.com/w/index.php?title=Bird_flu&oldid=233349"
Categories: