Joël van der Reijden notes that the Munich Security Conference is a group that is "always hopelessly overlooked in conspiracy circles. Many visitors later show up in western governments."[1] 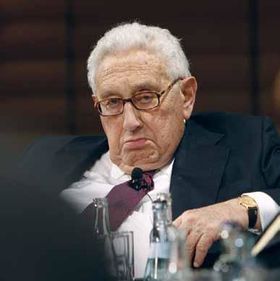 Henry Kissinger at the 2012 MSC

Around 600 guests attend the conference. Their website boasts that it hosts some "of the most important decision-makers in the realm of international security policy".

"Charter of Trust for cybersecurity"

In February 2008, the MSC was reported on by the commercially-controlled media after large corporations agreed a "Charter of Trust for cybersecurity", an idea floated by Siemens CEO, Joe Kaeser, at the World Economic Forum in 2007.[2]