Monekypox is an infectious disease caused by a virus that occurs in certain animals, including humans (although not usually monkeys).[1] The FDA approved a vaccine in 2019. In 2020 gain-of-function research into increasing virulence was ongoing at the Wuhan Institute of Virology[2], in 2021 the Nuclear Threat Initiative and the Munich Security Conference held a tabletop exercise to rehearse global reaction to an outbreak of monkeypox.

“many media outlets have shared greatly exaggerated figures of up to 10% based on a single outdated and incomplete survey from the Congo. Yet if immuno-compromised individuals are excluded, the actual infection fatality rate in central and western Africa is about 1%, and it is likely to be a fraction of 1% in Western countries.”
(27 May 2022)  [3]

As of 2022, two distinct clades have been described in the literature: the Congo Basin clade, and much milder West African clade, with an IFR of usually <1%.[4]

The UK’s National Health Service edited their Monkeypox page before (or along with) the 2022 outbreak and changed some of their descriptions significantly.[5]

In 2020, researchers from the Wuhan Institute of Virology were actively researching genetic modification of the virus.[2]

In January 2022, several monkeys escaped from the crash of a truck towing a trailer load of 100 of the animals on a Pennsylvania highway. The shipment of monkeys was en route to a CDC-approved quarantine facility after from Mauritius, an Indian Ocean island nation.[6]

In 2021, a tabletop exercise was held, rehearsing the global reaction to an outbreak of monkeypox. The scenario portrayed a deadly global pandemic involving an unusually virrulent strain of monkeypox virus that first emerged in the fictional nation of Brinia and spread globally over 18 months. Ultimately, the exercise scenario revealed that the initial outbreak was caused by a terrorist attack using a pathogen engineered in a laboratory with inadequate biosafety and biosecurity provisions and weak oversight. By the end of the exercise, the fictional pandemic resulted in more than three billion cases and 270 million fatalities worldwide. 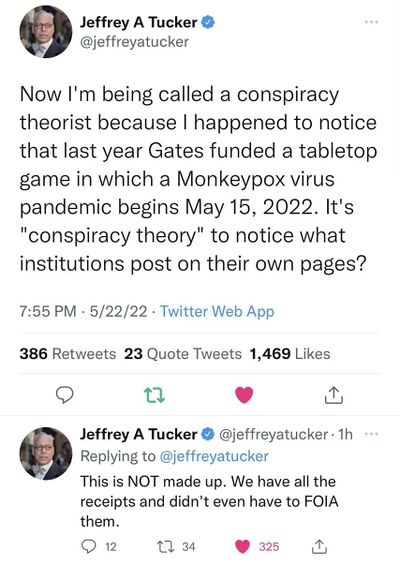 The outbreak of this virus was predicted to occur in May 2022, which did happen (in mild intensity) in real life. The planning exercise includes the WHO or a new entity to legally seize control of national health services as national governments were "poorly planning". The outbreak was also the first ever to occur outside Africa since any exercise after the first outbreak in Africa in the 1950s. No mentioning of its IFR or side effects of the Covid-19 jabs were allowed to be made in official narratives.[7]