“Well I think... coronaviruses — you can manipulate them in the lab pretty easily. Spike protein drives a lot of what happen with coronavirus, in zoonotic risk. So you can get the sequence, you can build the protein, and we work a lot with Ralph Baric at UNC to do this. Insert into the backbone of another virus and do some work in the lab.”
Peter Daszak (9 December 2019)  [1]

Dr. Peter Daszak is a US virologist interested in zoonotic emergence of viruses. He worked with the WHO[2] and for years worked with Zhengli Shi on gain-of-function research to weaponise bat coronaviruses.[3][4][5] After his dual role as creator of new coronaviruses and "investigator" of COVID's origins was clear, Glenn Greenwald termed him a "completely discredited, conflict-plagued scientist".[6]

Peter Daszak took a B.Sc. in Zoology with applied zoology in Bangor University in 1987, followed by a Ph.D. from the University of East London,

Daszak is president of EcoHealth Alliance, which disbursed NIH funds for the investigation of emerging viruses to laboratories including the Wuhan Institute of Virology[7], about which he has refused to provide paperwork requested by US congress.[8] 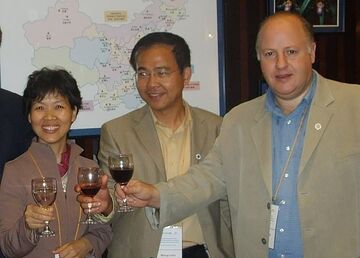 Peter Daszak's EcoHealth Alliance was awarded $666,442 to carry our research into "Understanding the Risk of Bat Coronavirus Emergence."[9]

In 2018 his DEFUSE project was turned down by DARPA, because it proposed Gain-of-function research but "the proposal does not mention or assess potential risks of Gain of Function (GoF) research."[10]

Warning about the possibility of zoonotic virus emergence

“Pandemics are like terrorist attacks: We know roughly where they originate and what’s responsible for them, but we don’t know exactly when the next one will happen. They need to be handled the same way — by identifying all possible sources and dismantling those before the next pandemic strikes.”
Peter Daszak (27 February 2020)  [11]

“We don’t think twice about the cost of protecting against terrorism... We need to start thinking about pandemics the same way.”
Peter Daszak (21 April 2020)  [12]

Daszak has consistently promoted the zoonotic theory of the origins of COVID and obstructed real research into the topic. He emailed Fauci in 2020 to thank him for publicly discrediting the possibility that Covid was man made.[13]

“Instead of providing public health authorities with the plentiful information at his disposal, [Peter Daszak] immediately launched a public relations campaign to persuade the world that the epidemic couldn’t possibly have been caused by one of the institute’s souped-up viruses.”
Peter Daszak (2021)  [14]

In February 2020 Daszak anonymously drafted a statement to The Lancet[15] that strongly condemned "conspiracy theories suggesting that COVID-19 does not have a natural origin".[16]

“The point is that, let’s look at a balance of probability. That’s what you have to do. We have a few hundred technicians and scientists working in these labs. They do not have a problem with staff or with security or with loose controls. These are very well-run labs. They’ve been inspected by the U.S. CDC, by people working in BSL-4 labs, high-security labs, in the U.S., in France and internationally. They’re accredited by the U.S. So, it’s ironic that now we’re saying they’re not very well organized. We actually inspected them properly and allowed them to open. You know, the cables that were reported in the — [interrupted]”
Peter Daszak (16 April 2020)  [17]

In April 2020 Daszak before his role in funding g-o-f research at the WIV was widely appreciated, he appeared on multiple occasions to promote the zoonotic theory of COVID-19, at least once with Bill Gates.[18][19] After the NIH cut his funding, CBS named him "a scientist whose work is helping in the search for a COVID-19 cure" was "being undercut by pandemic politics."[20] He stated on Democracy Now! that "The idea that this virus escaped from a lab is just pure baloney."[21]

On 3 June 2020, The Telegraph reported Richard Dearlove's belief that Covid-19 was man made. On 9 June 2020 Daszak was published by the Guardian entitled Ignore the conspiracy theories: scientists know Covid-19 wasn't created in a lab. The article stated omitted to mention Daszak's long term working relationship with Zhengli Shi and the Wuhan Institute of Virology, although it was amended to include this on 11 June.[22] The article did not contemplate the idea of a deliberate release, and claimed that an accidental release from a BSL-4 lab was unlikely: 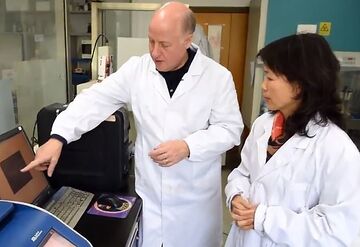 By January 2021 he was "facing calls to step down from two key inquiries into the origins of Covid-19 after leading the global battle to dismiss suggestions that it might have leaked from a Chinese laboratory linked to his charity."[24]

Peter Daszak has published many papers on the emergence of viruses, some with Zheng-Li Shi.

A Quote by Peter Daszak