Ivermectin is a drug invented in 1975, initially used to treat many types of parasite infestations. It is on the WHO's List of Essential Medicines, is an FDA-approved anti-parasitic agent. By June 2020 it was discovered to be highly effective against COVID-19, in any stage of the disease and also prophyllactically.[1] A meta-analysis funded by the WHO showed an 83% reduction in mortality in hospitalized patients treated by ivermectin. As news spread, it was eagerly adopted by doctors treating COVID patients, but centralised health bodies issued recommendations against its use, questioning both efficacy and safety (although billions of doses had been given worldwide before 2020).

The Front-Line COVID-19 Critical Care Alliance developed what they said was "a highly effective protocol for preventing and early treatment of COVID-19... Ivermectin is effectively a “miracle drug” against COVID-19." On 27 August 2020 the NIH recommended against its use for COVID-19.[2] It was banned in South Africa in December 2020.

In 2021 corporate media termed ivermectin as a "horse-dewormer" and "cow drug". Advocates of ivermectin are being smeared as "far right conspiracy theorists".[3]

Like Hydroxychloroquine, ivermectin is out of patent and so far cheaper than experimental new drugs developed in response to Covid-19.

In 1970, microbiologist Satoshi Ōmura of Kitasato University collected a soil sample from woods close to a golf course in Kawana, on the south east coast of Honshu, Japan.[4] This serendipitous sample lead to the discovery of the avermectin family of compounds, from which ivermectin is chemically derived. Ivermectin was introduced in 1981.

The 2015 Nobel Prize in Physiology or Medicine was awarded jointly to Satoshi Ōmura and William C. Campbell of the Merck Institute for Therapeutic research for discovering avermectin, "the derivatives of which have radically lowered the incidence of river blindness and lymphatic filariasis, as well as showing efficacy against an expanding number of other parasitic diseases"[5]

Use for treating Covid-19

The FDA issued a warning in April 2020 that ivermectin intended for use in animals should not be used to treat COVID-19 in humans.[6]

In April 2020 Australian scientists did an in vitro study[7] which showed that ivermectin was effective against SARS-CoV2 which concluded that the drug "warrants further investigation for possible benefits in humans."[8]

Dr Andrew Hill of the Department of Pharmacology at the University of Liverpool (UK) was engaged in a WHO-commissioned review and meta-analysis of randomized controlled trials of ivermectin against Covid-19. He reported initial findings in December 2020 that the drug yielded an 83% reduction in Covid-19 mortality.[9] A presentation of the work by Andrew Hill was given at "Ivermectin Against COVID-19 Collaborative Workshop", December 15-17, 2020, sponsored by MedinCell, S.A.

Dr. Tess Lawrie, Director of the Evidence-based Medicine Consultancy Ltd, has published a meta-analysis of the research about ivermectin use against COVID.

In February 2021, the Daily Mail reported about the drug.

In November 2020 Dr Pierre Kory, speaking on behalf of his non-profit organization, the Front-Line COVID-19 Critical Care Alliance, "made up of some of the most highly published and well-known critical care experts in the world"[10], called for the US government to swiftly review the medical evidence on ivermectin. To a US Homeland Security Committee[11][12], he declared:

It is with great pride as well as significant optimism, that I am here to report that our group, led by Professor Paul E. Marik, has developed a highly effective protocol for preventing and early treatment of COVID-19. In the last 3-4 months, emerging publications provide conclusive data on the profound efficacy of [...] ivermectin in all stages of the disease. Our protocol was created only recently, after we identified these data. Nearly all studies are demonstrating the therapeutic potency and safety of ivermectin in preventing transmission and progression of illness in nearly all who take the drug...."These data show that ivermectin is effectively a “miracle drug” against COVID-19.

"we also are dismayed at the near complete absence of guidance and research on effective early, at-home, or preventative treatment options apart from vaccines, a reality we find unconscionable"...

Democrats boycotted the hearing except for an opening statement by ranking member Senator Gary Peters, who left after opining that the hearing “was used as a platform to attack science and promote discredited treatments”[13].

Kory, a pulmonary and critical care specialist, expressed outrage at Peters’ disparaging comments. He said, “I want to register my offense at the ranking member’s opening statement... I am a physician and a man of science. I have done nothing, nothing but commit myself to scientific truth and the care of patients.”[14]

“I want to bring attention to two critical deficits in our national treatment response that has made this hearing necessary in the first place. Besides the early interest and research into hydroxychloroquine, we can find no other significant efforts to research the use of any other already existing, safe, low-cost therapeutic agents. Seemingly the only research and treatment focus that we have observed on a national scale is with novel or high-cost pharmaceutically engineered products”
Dr. Pierre Kory (December 2020)  [15]

One explanation for the success of ivermectin during COVID-19 lies in its antibiotic properties. The official treatment protocol[16] for people declared to have COVID-19, is essentially to do nothing. This includes not giving antibiotics. Treatment is left until some people need to go to hospital, where the protocol is mechanical ventilation (a deadly procedure) for breathing problems and drugs such as remdesivir.

A 2021 study by Denis Rancourt found a large and undeclared COVID-era pneumonia epidemic in the United States. Pneumonia is routinely successfully treated with antibiotics if done fast enough. If people with bacterial pneumonia declared as COVID are not given antibiotics, the mortality would increase. According to this, doctors lower death rates by prescribing ivermectin, are thus treating undiagnosed bacterial pneumonia.[17][18]

In 2021, a variety of aggressive moves were made to try to suppress use of ivermectin, just as hydroxychloroquine was suppressed in 2010.

The FDA issued a warning in April 2020 that ivermectin intended for use in animals should not be used to treat COVID-19 in humans.

In December 2020 the South African Health Products Regulatory Authority (SAHPRA) banned the importation of ivermectin into the country. Dr. Boitumelo Semete-Makokotela, SAHPRA’s chief executive, declared, “Our stance is unambiguous. This drug is not approved by SAPHRA, and any attempt to import it into the country will be dealt with by SAHPRA’s regulatory compliance unit in conjunction with law enforcement agencies such as SAPS and the SIU.” He also pointed at a whistleblower contact to the public should anybody be aware of such activity.

"Given the drug’s pervasive use throughout the African continent to fight parasitic infection, the ban comes at an interesting time, where mounting data points to the possible benefits of the drug and COVID vaccinations are being hurried through."[19]

Cryptocurrency exchange FTX spent $18.25M on the Together trial which purported to show that neither ivermectin nor hydroxychloroquine were helpful in treating COVID-19.[20] 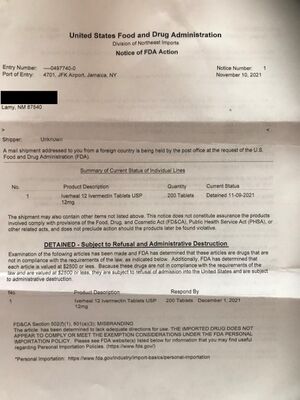 Nick Corbishley noted in May 2021 that "both traditional and social media have gone to extraordinary lengths to keep people in the dark about ivermectin".[21] Twitter took action after the European Journal of Medical and Health Sciences published a paper about the effectiveness of ivermectin.[22]

By November 2021, USPS and the FDA were intercepting deliveries and seizing the contents.[23]

Ivermectin is a right wing conspiracy - The Guardian[24] 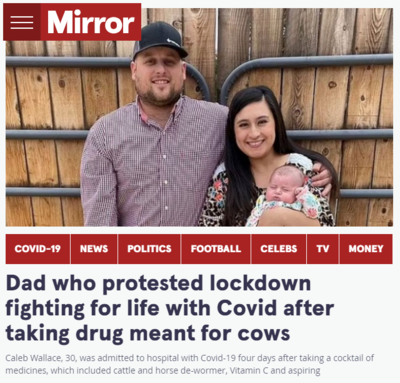 Daily Mirror article on the death of Caleb Wallace. 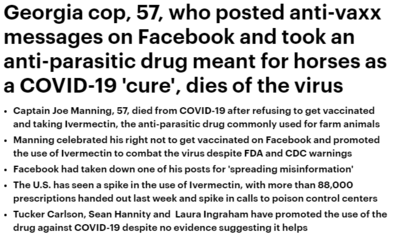 Daily Mail article on the death of Captain Joe Manning.

The CCM reported deaths occurred in August 2021 being caused by ivermectin.[citation needed] 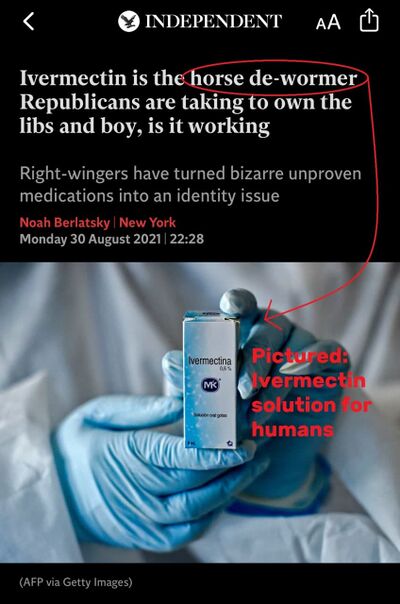 The Independent on ivermectin.

Joe Rogan was treated with ivermectin.[25] Reported under entertainment on Sky News rather than health.[26]

The Guardian reported that hospitals in Oklahoma were being flooded with patients with ivermectin overdoses.[27]

Pete Lopez from Texas died after the hospital he was in refused to administer ivermectin despite having a prescription. His family took the hospital to court but Lopez died before he could have it.[28]