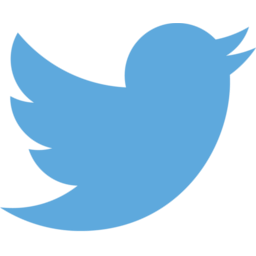 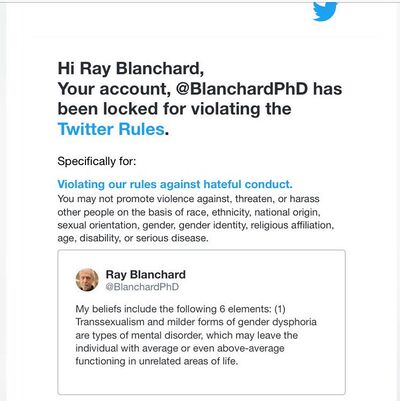 Ray Blanchard, a psychologist and leading researcher on transgender people is blocked after tweets in which he expressed his core beliefs about Transgenderism.[1][2][3]

In 2016 Craig Murray was "ghost banned" by Twitter, resulting in a 90% decrease in traffic to his site from that site.[4] Scott Adams, creator of Dilbert, reported in 2017 that he had been "shadowbanned" because of his writings about Donald Trump.[5] Twitter was an active participant in the COVID-19 censorship, and in August 2020 it began censoring all links to BitChute videos.[6] 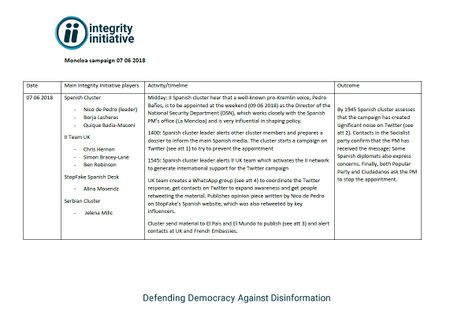 Documents leaked in 2018 suggested that the Integrity Initiative was using "clusters" of journalists to try to promote Russophobia[7] and also to smear Jeremy Corbyn.[8]

In August 2021, they will test out a "report function" to prevent "misinformation".[9]

Twitter’s ‘head of editorial’ for Middle East is officer in a UK Army propaganda unit the 77th Brigade. Gordon MacMillan has been working at Twitter for since 2012 and has been its Head of Editorial, Europe, the Middle East and Africa since July 2016.

A spokesman from Twitter told The Independent that it was an “open, neutral, and independent service” and that a review of Mr MacMillan’s service as an army reserve psychological warfare volunteer had found no violation of its policies.[10]

Nick Pacilio, per 2021 the senior communications manager for Twitter, was Vice President Kamala Harris' previous press secretary from 2011-14, while Harris was the attorney general of California, [11], and announced the removal of Trump Tweets[12].

A fascinating fact check by Microsoft-owned MSN created the impression in its headline and article that this connection is untrue. Out of the many social media accounts talking of this, they picked a Facebook post to debunk that somewhat imprecisely claimed "Kamela Harris' press secretary is the chief of communications at Twitter. Let that sink in"[13], The MSN 'fact-check' focuses on the word "current", and states "the claim that Harris' press secretary is the senior communications manager of Twitter is FALSE, based on our research. There is no evidence that her current press secretary, Sabrina Singh, was ever employed by Twitter.[14], while the same article in an example of doublespeak correctly confirms the core of the claim, "Harris' former press secretary now works at Twitter; he became an employee there after working for Harris."