The 'Lolita Express' was a private plane used by Jeffrey Epstein to fly guests to lavish parties; tabloids nicknamed it 'The Lolita Express'.[1] The plane is a 727-200 which apparently started as a 727-31 (a TWA model), possibly later upgraded to a Super 27.[2][3] The interior was exclusive.[4][5] According to court filings by his lawyers he sold the plane in June 2019, shortly before his arrest.[6]

As well as transporting people to Epstein's properties, the Lolita Express itself was reported often to have had underage girls on board[7] and to have been a venue for Epstein's VIPaedophile sexual blackmail activities. 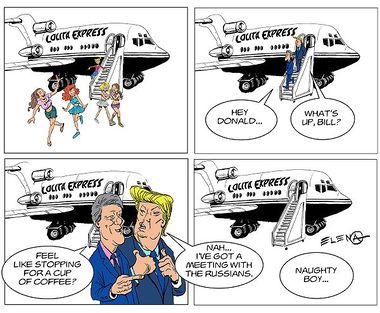 In 2019, efforts were ongoing to contact pilots and other employees who traveled aboard the Lolita Express to testify about Jeffrey Epstein.[10]