Adam Smith International (ASI) was founded in 1992 by the neoliberal think tank Adam Smith Institute as a London-based consultancy "charged with overseeing the overseas work of the institute... [in] an attempt to capitalise on the growing international trend towards economic liberalisation and marketisation."[1]

"Our name derives from the relationship that one of our founders had with the Adam Smith Institute, but we are a wholly different, separate and independent organisation with our own objectives focused on tackling the toughest problems faced by governments and societies around the world."

Much of ASI's initial work was in the countries of Eastern Europe and the former Soviet Union, helping these states build functioning market economies and responsive and accountable governance structures after the collapse of the Soviet Union. ASI soon expanded into Asia, Africa and South America, advising on a wide variety of economic and government reforms. We played a key role in helping deliver successful state enterprise reform at state level in India and started a long and very influential programme of support to the Palestinians in their negotiations with Israel.

ASI was the first British international development consultancy in Afghanistan after the fall of the Taliban and supported the new government with numerous programmes, remaining the largest supplier of UK technical assistance since that time. ASI played a central role in the development of the Afghan state, not least by helping increase revenue ten-fold since 2002.

ASI was also the first international development company in Iraq in 2003 and carried out a range of critical tasks, notably the creation and development of new central government institutions and policy-making processes.

In 2011, ASI ran the Temporary Financing Mechanism (TFM) in Libya, managing the delivery of $1bn for essential services at the height of the conflict. ASI's success in managing and delivering complex and politically sensitive programmes at scale in countries such as Libya was a key factor in the award in 2013 of a major British-led programme, the Somalia Stability Fund, which ASI now manages from offices in Mogadishu and the regions of Somalia. 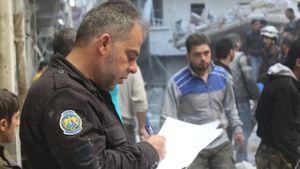 In December 2017, the Foreign Office announced the suspension of funding of the Access to Justice and Community Security (AJACS) project that supports the Free Syrian Police (FSP) in rebel-held areas of Syria, and which ASI has managed since 2014. The announcement followed a BBC Panorama programme "Jihadis You Pay For" which claimed that British taxpayers’ money intended for the unarmed western-backed FSP reached jihadis with links to al-Nusra Front.[2]

Andrew Mitchell MP, the former International Development Secretary, said it was inevitable the FSP would come into contact with extremist groups and that complexity should not deter the UK from involvement. The Foreign Office, which funds the AJACS with five other governments, said the scheme was important for Britain’s national security but that it had suspended the funding while investigations continued:

“We believe that such work in Syria is important to protect our national security interest but, of course, we reach this judgment carefully, given that in such a challenging environment no activity is without risk.”[3]

Four of ASI's founders Andrew Kuhn, William Morrison, Amitabh Shrivastava and Peter Young were forced by the Department for International Development (DfID) to step down in March 2017 after it emerged that ASI, which has been entrusted with £537 million in development cash since 2011, had tried to profiteer by exploiting leaked DfID documents. It was also heavily criticised for trying to “unduly influence” a parliamentary inquiry by engineering “letters of appreciation” from beneficiaries of its projects.

The House of Commons International Development Committee (IDC) said ASI “overstepped the mark” in soliciting testimonials that were submitted as evidence to the MPs’ inquiry into the government’s use of aid contractors. The IDC said ASI’s actions were “deplorable”, “entirely inappropriate” and showed a “serious lack of judgment”.

“We regret that certain deficiencies of policy and procedure resulted in our failure to meet the highest standards of corporate governance, such that we did not meet the expectations of DfID and the public, to whom we are accountable.

“The changes we are making will address the requirement to now meet and exceed these expectations. We seek to ensure the highest standards of corporate governance, a fit-for-purpose structure and culture, and accountability.”[4]

In September 2017, Sir Martin Davidson who was brought in to turn ASI around lost a vote of confidence and had to resign.[5]