Marina Abramović is an internationally renowned Serbian performance artist. She came to notoriety when John Podesta and his brother Tony were being invited one of her “spirit cooking dinners”.

In 1996, Abramović worked with Jacob Samuel to produce a cookbook of "aphrodisiac recipes" called Spirit Cooking. These "recipes" were meant to be "evocative instructions for actions or for thoughts".[1] For example, one of the recipes calls for to "mix fresh breast milk with fresh sperm milk."[2]

In 1997, Abramović created a multimedia Spirit Cooking installation. This was originally installed in the Zerynthia Associazione per l'Arte Contemporanea in Rome, Italy and included white gallery walls with "enigmatically violent recipe instructions" painted in pig's blood.[3] 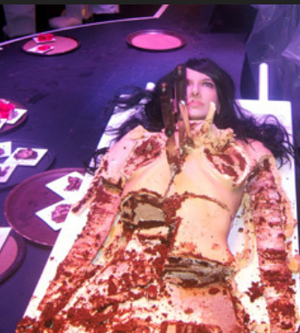 Spirit Cooking later evolved into a form of dinner party entertainment that Abramovic occasionally lays on for collectors, donors, and friends.[4]