The American Israel Public Affairs Committee is a lobbying group that advocates for pro-Israel policies to the Congress and Executive Branch of the United States. The current President of the AIPAC is Lee Rosenberg, from Chicago, Illinois.[1] As an independent, not-for-profit entity, AIPAC is funded through contributions from its members.

Describing itself as "America's Pro-Israel Lobby," AIPAC is a mass-membership organization whose members include Democrats, Republicans, and independents. The New York Times calls it "the most important organisation affecting America's relationship with Israel." [2] It has been described as one of the most powerful lobbying groups in Washington. Its fiercest critics regard it as an agent of the Israeli government with a "stranglehold" on the US Congress.[3] 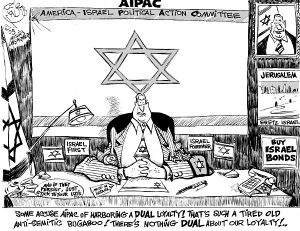 In 1984 the FBI investigated after the Israeli Minister of Economics Dan Halpern passed stolen classified US government documents to AIPAC outlining trade secrets of major US industries lobbying against the US-Israel Free Trade Area.[4]

In 2005, a Pentagon analyst pleaded guilty to charges of passing US government secrets to two AIPAC staffers in what is known as the AIPAC espionage scandal. Both staffers were later fired.[5]

Cynthia McKinney has stated that "AIPAC is in total control of US Government & few Americans know anything about it".[6] An anti-AIPAC protest, referred to as AIPACalypse, was organised in 2017 to protest the influence of AIPAC.[7]