Brittany Venti is an American internet personality, commentary YouTuber and “professional troll”. Venti’s comedic style of content has been affected by Internet Censorship, with her being banned multiple times from different platforms.

With an internet history dating back to the Gamergate controversy era, Venti is an internet celebrity best known for the comedic character she portrayed in her streams and videos. Formerly a streamer on Twitch, she now mainly uploads content on YouTube. Her most popular videos are her exposés of other internet celebrities; for their hypocritical behaviour and questionable content.

Venti was born Brittany Dier in New York and grew up in Connecticut. She is of Ukrainian, German, Polish and African descent, and has no siblings.[1] Her father died when she was 15, and her mother died when she was 16.[2] She is an octoroon, being one-eighth black. In her childhood, she played video games with her cousin.

She allegedly dropped out of high school before she became famous.[3]

Many internet celebrities became established in and around the time of the Gamergate controversy. Brittany began her livestreaming career on the streaming platform Twitch in late 2014 when she was 17, using the name 'LolipopNinja. She later used the screen name Brittany Venti. The surname in her screen name comes from the size of drink available at Starbucks. She would play video games and react to videos that viewers sent to her. She used a "basic bitch" online persona in order to troll her Twitch audience. Venti pretended to be an uneducated and over-emotional E-girl, who would regularly scream at her viewers for “hate speech” and acting dramatic whenever her stream was raided by people from 4chan. She would create her own vocabulary and mispronounce words on purpose as part of her ditzy character. She also used sex appeal, which other female streamers on the internet utilised for clickbait. Her character was personified by her exaggerated comedy that pushed the boundaries of Twitch’s Terms of Service. Her channel was covered in an article by Vice News.[4]

She uploaded her first video on YouTube on 1 May 2015. It was an introduction to who she was, talking about her favourite video games. She rambled and talked in a way that parodied other popular E-girls at the time. The parody was lost on most people, and the video received more dislikes than likes. She uploaded clips of her twitch streams to her YouTube channel.

She had two twitch accounts suspended, and later streamed on the platform, Hitbox in late 2015.[5]

Her claim to fame was a video in 2016 in which she pretended to freak out when another player “raped” her character in Grand Theft Auto.[6] Later in 2016, she was banned from Twitch for using the text to speech function. She was accused of anti-semitism after the AI read out an offensive comment in the form of a voice donation. [7]

After her ban from Twitch, she carried on trolling people on Twitter and YouTube. Venti was shadow banned by the former. In early January 2017, she achieved notoriety after attending He Will Not Divide Us in New York. She made a number of appearances making speeches and trolling the protestors.[8] During one of her appearances, she asked people to chant "shadilay", which she said was the Jewish call to prayer. The protestors chanted it and the video went viral.[9] She also “rheeeeeeed” when there was a large crowd.[10]

The same year, Venti attended the May Day protests.[11] She was arrested by NYPD after getting attacked by Antifa. [12][13] She went on Rebel News and talked about it with Gavin McInnes.[14]

In August 2017, she attended the Unite the Right rally and filmed it for her YouTube channel, before it was wiped. [15] 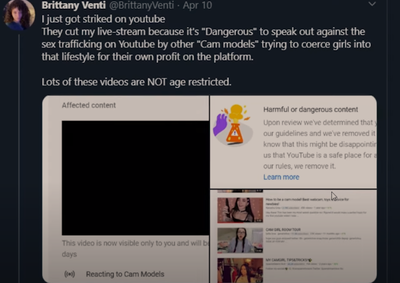 On 4 April 2018, she had a strike on her Twitch channel for a stream she did about the YouTube headquarters shooting.[16] Twitch accused her of "attempts or threats at harm".[17]

Soon after, she was issued a 24-hour suspension. Venti was accused of Online hate crime and was effectively accused of being a white cultural appropriator for her stream entitled “Ethnic girls Kitchen Stream”. In the video, she made traditional Haitian mud cookies. She did this after Trump called Haiti a sh**hole.[18]

Twitch accused her of producing “racist content” as her stream supposedly included “racist and offensive stereotypes”. Venti released screenshots of emails she exchanged with Twitch Staff. [19] She tweeted out “I got banned for having an African cooking stream today on Twitch because they thought it was offensive. My mom is black, I was raised by her –a black woman. They just assumed my race and banned me. I have DNA testing to prove this.” This was yet another racial controversy involving Twitch.[20]

In September 2019, she made videos covering the PewDiePie ADL controversy.[21][22]

In early 2020 she faced YouTube/Censorship. She had a livestream on YouTube taken down mid-stream when she was speaking critically about pornography and sex trafficking.[23] Venti tweeted about the hypocrisy of the YouTube’s policy enforcement as many cam-girls are actively promoted by YouTube to children.[24]

She received a second strike from YouTube during a livestream which was titled “A Stream That Violates NO RULES”. The stream was Venti sat in front of the camera reading a book in silence. The microphone was muted so there was no sound. Behind her was a sign that said “N Word Pass”. Despite the innocence of the video, YouTube removed the stream stating that it was “harmful and dangerous”. The book she was reading was “How To Be Black”, a comedic memoir by American comedian Baratunde Thurston.

The livestream was intended to combat Cancel culture, as people have been cancelled for saying the N-Word, despite its constant use in popular culture. Being a black woman, Venti believes that Political correctness and double standards are being pushed by Silicon Valley in order to silence people. Venti even shared a childhood photo of her with her mother, proving her black identity. Still, YouTube rejected her appeal and the video was deleted. As well as that, her channel received a strike despite her not breaking any of YouTube’s rules.[25]

Venti praying on livestream in April 2020. This stream was flagged as "dangerous".

In April 2020, she received at least seven takedowns of her livestreams after they were flagged for being “harmful and dangerous,” only for them to be reinstated a few hours later.[26] One of the most notable of these streams was one in which Venti was praying. YouTube said it was a mistake and blamed it on automated systems due to the coronavirus pandemic. It was reported on by Reclaim The Net.[27]

She questioned the official narrative around the 2021 Washington D.C. Riots.[29]

In April 2021, she created another channel "Ladies Restroom", in which she uploaded content aimed specifically for female viewers; clothing, advice and vlogs.[30]On 12 July, she announced that she would be merging the two channels, and reuploading her vlogs to her main channel.[31]The reason she did this is because of YouTube ad-sense issues.[32]

In 2021, her main YouTube channel was completely demonetised for a period.

In February 2022, she appeared in Louis Theroux's documentary series Forbidden America.[33] The rest of the year she made content on subjects like the Freedom Convoy[34] and the Twitter Files.[35] Her video on TikTok talking about Balenciaga got over 3 million views.[36] 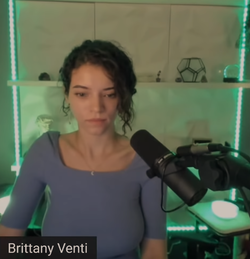 Venti advocates for Freedom of speech, and ridicules Political correctness.

Venti opposes Black Lives Matter, and has criticised their corporate sponsors. For this opinion she has been labeled an Uncle Tom by RationalWiki.

She is anti-pornography and makes YouTube videos about sex trafficking.

She enjoys K-pop and Anime, which she incorporated into her character.

She is a registered with the Republican Party. She lives in Dallas, Texas with her cats, after moving from New York City in Summer 2021.[37]