The Christchurch Mass Shooting happened in Christchurch, New Zealand on 15 March 2019. It was livestreamed onto the internet.[1] Four people were arrested. It was followed by unprecedented threats to try to prevent spread of the livestreamed video.

Brenton Tarrant emailed the New Zealand Prime Minister a manifesto and then went on a "lone nut" shooting spree, killing 50 people, livestreaming the mass murder on the internet as he did so.

Commercially-controlled media have been reluctant to use the phrase "terrorism"", with Fox News settling instead on calling it a "mass shooting".

"Snipers from the New Zealand military, as well as professional snipers from Australia and Asian countries, had been at the Defence Force shooting range at West Melton, 25kms west of the city".[2]

CNN reported that "New Zealand Prime Minister Jacinda Ardern's office received an email with the manifesto from the suspect behind the mass shootings at two Christchurch mosques, minutes before the attack began."[3]

The BBC reported on 18 March that Recep Tayyip Erdogan showed sections of the video to supporters at political rallies.[4]

A global collaboration quickly swung in to action to try to control access to the event. A Saidit commentator termed it " a test run to remove en mass anything that the establishment/TPTB doesn't like or want you to see or know."[5]

The NZ government announced that they would tighten gun control.[6][7] 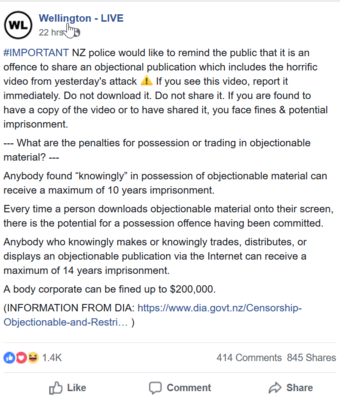 The New Zealand Police deemed that video of the attack was "objectionable" and that anyone sharing it could be liable for up to 14 years in jail and that even "knowingly" possessing was punishable with up to 10 years.[8]

By 17 March the NZ police were arrested and charging people with sharing videos of the shootings.[9][10][11]

Philip Arps, who pleaded guilty to sharing the livestreamed video to about 30 people shortly after the shooting, was sentenced in the Christchurch District Court to 21 months in prison in June 2019.[12]

By 29 March, "Security house Blue Hexagon claims it discovered a version of the killer's manifesto doing the rounds online containing Windows malware that, when executed with the necessary privileges, reboots the system and leaves the user staring at an anti-racist message. The idea being to punish those who seek out the document, it appears."[15]

After the event Vladimir Putin passed a bill to ban "fake news" and another to make it illegal to insult public officials.[16]