The "PayPal Mafia" is a suspected deep state faction of former PayPal employees and founders who have since founded and massively helped new tech companies achieve leading market shares. The members all met at Stanford University or University of Illinois at Urbana–Champaign at some point in their adolescence and some even dropped out and started companies together during the Internet bubble of the 1990s. Some became WEF members, or Bilderberg members, and Peter Thiel, nicknamed The Don of the group even became head of the Bilderberg Steering Committee. 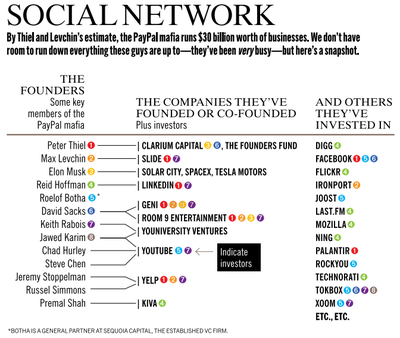 According to a book The Founders: The Story of Paypal and the Entrepreneurs Who Shaped Silicon Valley.PayPal was purchased by eBay in 2002 and the original PayPal employees had difficulty adjusting to eBay's more traditional corporate culture and within four years all but 12 of the first 50 employees had left.[1]

A number of them worked together to form new companies and venture firms in subsequent years. This group of PayPal alumni became so prolific that the term PayPal Mafia was coined, after which Fortune published the The Soprano's like picture and coined the term.

The group started to invest small and very large sums in big tech companies in small markets that all seized market share. Some companies, such as Palentir, soon received CIA funding.[2][3] The group was noted to be one of the few to survive the dot.com bubble of the 1990s.[4]

As the consolidation of corporate media has shown, when the same group of people all become the main investors or investors of companies having a leading market share in big markets (like the media), the persons running them become mightier than governments and start to act like a hostile government itself, against ethical interests of the public.

Examples of companies started or developed by the members

One of their key methods in growing their companies is the Hidden Revenue Model. Although promoting their business as free, its source of revenue is through user monetization via adverts. Another key method is platformization, or a Multi-Sided Platform Model, like implemented by LinkedIn co-founder Reid Hoffman, and investors from the PayPal Mafia, like Peter Thiel and Keith Rabois. Many of the clan adopted this business model that serves as “invisible middlemen” in interactions among buyers and sellers, allowing more data of the users on these sites to be sold to companies harming privacy.[6]

Several members were made Young Global Leaders of the World Economic Forum, even though they didn't finish their BA or masters degree. Peter Thiel even became a Bilderberg Steering Committee member.

The owners seem to all follow the same patterns; working with intelligence agencies after massively growing their companies to a market share. Reddit (experienced a massive growth with illegal or controversial content such as creating a subforum for sexually discussing underage children during the early 2010s under CEO Yishan Wong's reign[7]) Facebook (Invested by Peter Thiel) & Youtube (Founded by Chad Hurley & Steve Chan their history is a perfect example for this. Ken Howery was made U.S Ambassador to Sweden in 2019. Elon Musk acquired Twitter in 2022.

Peter Thiel has attended all subsequent Bilderberg meetings (since 2012, with together with co-founder of Palantir, Alex Karp), being one of the 181 since 1956 to become a Steering Committee-member.

Thiel founded Palantir with Alex Karp and Joe Lonsdale in 2004, a company which at least by 2008 was collaborating with GCHQ & the NSA[8].

LinkedIn - founded by Reid Hoffman - has been accused of poor privacy and security standards, silently programming their mobile apps to reroute[9] all the emails of their users mobile devices through their own private LinkedIn servers, for undisclosed purposes[10][11]. Given that LinkedIn has been the target of a dozens of hacks, by multiple intelligence agencies, a choice that seemed not logical. 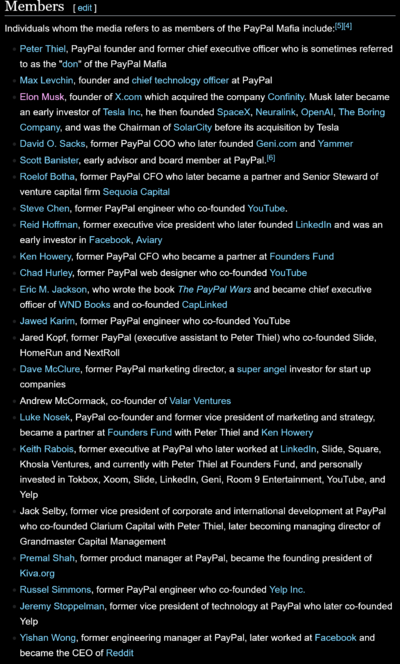 Palantir had worked with Cambridge Analytica, who was implicated in using big data of Facebook to instigate coups worldwide and influence elections.[12] Palantir has been contracted by the CIA (for aiding ICE & the NSA creating illegal hacking software), and the CDC (for AI-predicting software and help with Operation Warp Speed).