Operation Warp Speed is a US deep state project that had as mission to facilitate, at an unprecedented pace and expense, the development, manufacturing, and distribution of a COVID-19 vaccine to the entire US population by January 2021.[1][2] A significant number of military personnel is utilized in this effort.[3][4]

Then Vice President Mike Pence, head of the White House Coronavirus Task Force, described it as:

It’s amazing to think that the average development timeline for a vaccine can take 8 to 12 years. But as you heard today, we’re on track to accomplish a safe and effective coronavirus vaccine in 8 to 12 months. Before Operation Warp Speed, the fastest prior vaccine development in the United States took over four years. But as the President said earlier today, we’ve developed a gold standard vaccine in just nine months. Only in America.[5]

On April 30, 2020 the Trump administration announced a "Manhattan Project-style" effort to drastically cut the time needed to develop a coronavirus vaccine.

Operation Warp Speed is reportedly the brainchild of Presidential Adviser and son-in-law Jared Kushner. It is being formally run by the Health and Human Services Secretary Alex Azar and Defense Secretary Mark Esper, who will work with a new Vaccine Czar. The Vaccine Czar selected for Kushner’s Operation Warp Speed is former GlaxoSmithKline Chairman of its Vaccines Division, Morrocan-born US citizen, Dr. Moncef Slaoui.

60 military officials — including at least four generals — are involved in the leadership of Operation Warp Speed, many of whom have never worked in health care or vaccine development. Just 29 of the roughly 90 leaders on the chart aren’t employed by the Department of Defense; most of those work for the Department of Health and Human Services and its subagencies.[6]

Normally a vaccine takes 10 years to develop, due to safety tests, but in this case, Big Pharma companies have been fully indemnified by the US government against liabilities should vaccine recipients die or develop serious disease as a result of the hyper-rushed vaccine.[7]

Fourteen promising candidates have been chosen from the 100+ vaccine candidates currently in development for Covid-19 — some of them already in clinical trials with U.S. government support, which will be reduced to 3-5 in the end.

In April 2020, the leading US Government candidate for winning the “warp speed” race to roll out a COVID-19 vaccine was Slaoui’s Moderna Inc. in Cambridge, Massachusetts. On April 16, Moderna got an award from US government agency BARDA for $483 million to accelerate development of mRNA-1273m, a gene-edited vaccine technology that is entirely experimental and has never before approved for use as a vaccine.[8]

Dr. Slaoui also has ties to the projects of the Bill & Melinda Gates Foundation. He sat on the board of the Gates-funded International AIDS Vaccine Initiative. The IAVI was initiated in 1994 at a Rockefeller Foundation conference and is backed among others by the Gates Foundation, by the US Department of Defense and by Anthony Fauci’s National Institute of Allergy and Infectious Diseases.

Johnson & Johnson, which hopes to begin trials of its most promising potential vaccine at latest by the first week of September 2020, announced that it had struck a deal with the intelligence connected company Emergent BioSolutions of Maryland to mass produce its product.[9] 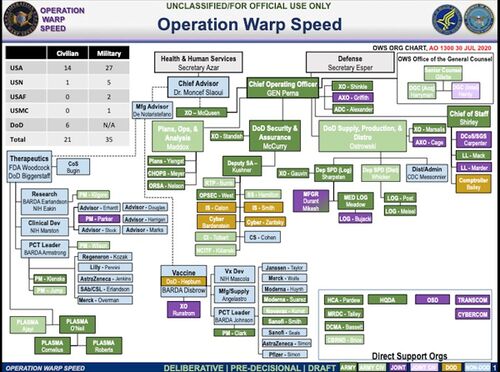 The U.S. Congress has directed almost $10 billion to this effort through supplemental funding, including the CARES Act, and Congress has appropriated other flexible funding. Over $6.5 billion has been designated by the US Congress for countermeasure development through the Biomedical Advanced Research and Development Authority (BARDA), along with $3 billion for NIH research.

Instead of entering into contracts directly with vaccine makers, more than $6 billion in Operation Warp Speed funding has been routed through a defense contract management firm called Advanced Technologies International, Inc. ATI then awarded contracts to companies working on COVID-19 vaccines.

As a result, the contracts between the pharmaceutical companies and ATI may not be available through public records requests, and additional documents are exempt from public disclosure for five years.[11]

The U.S. federal government is making investments in manufacturing and distribution at its own risk much earlier than usual, giving firms the knowledge that they can invest aggressively in the development.