The 2003 Iraq War was an invasion of Iraq by the US and its allies. The major motive was control of the oil in Iraq, although this was not publicly admitted at the time. While feigning disinterest in public, BP told the UK Foreign Office that Iraq was "more important than anything we've seen for a long time".[1]

Saddam Hussein was a bad man. The invasion was not a resource war for oil, but a last-ditch way to destroy the country's alleged weapons of mass destruction" and an act of humanitarian intervention. When the invasion was launched Iraq had been linked by an incessant drum-beat of propaganda in the commercially-controlled media to the attacks of 9/11. The Wikipedia infobox up to July 2017 used to declare the war to be "Part of the War on Terror",[2] but did not elaborate.

Operation Mass Appeal was a disinformation programme started in the late 1990s to facilitate later invasion of Iraq. MI6 worked on the project, as did figures in the UK Foreign Office.

"The intelligence and facts are being fixed around the policy", said Richard Dearlove, then head of MI6, at a meeting in Downing Street of Tony Blair's war cabinet on 23 July 2002.

On 6 September 2002, George W. Bush claimed that the IAEA had published a “new report” about Saddam Hussein’s efforts to create "weapons of mass destruction" the U.S. news-media reported the statement but hid that it was a lie. He said (and CNN and others quoted it): “a report came out of the Atomic — the IAEA that they were six months away from developing a weapon. I don’t know what more evidence we need”. The IAEA issued a denial that there was any such report,[3] but US commercially-controlled media did not report their denial and reported Bush's claim without question.[4]

On 3 February 2003, as the drums of war on Iraq were rising in tempo and volume, the UK Government under Tony Blair released a document entitled "Iraq: Its Infrastructure of Concealment, Deception and Intimidation", supposedly based on high level intelligence. It turn out that the majority of it was a word for word copy of an article written by Ibrahim al-Marashi, a US based undergraduate.[citation needed]

The modern, educated, advanced nation of Iraq was reduced to a virtual failed state. The United States and its UK ally, beginning in 1991, bombed for much of the following 12 years, with one dubious excuse after another. In 2003, the US "Coalition of the willing" invaded, then occupied, overthrew the government, tortured without inhibition, killed wantonly. The people of that unhappy land lost everything – their homes, their schools, their electricity, their clean water, their environment, their neighborhoods, their mosques, their archaeology, their jobs, their careers, their professionals, their state-run enterprises, their physical health, their mental health, their health care, their welfare state, their women’s rights, their religious tolerance, their safety, their security, their children, their parents, their past, their present, their future, their lives. More than half the population either dead, wounded, traumatized, in prison, internally displaced, or in foreign exile. The air, soil, water, blood, and genes drenched with depleted uranium; the most awful birth defects; unexploded cluster bombs lying in wait for children to pick them up; a river of blood running alongside the Euphrates and Tigris; through a country that may never be put back together again. [5]

Even before the war was waged, an unprecedented number of people marched to demonstrate their opposition to the plans for war. Tony Blair claimed to have been impressed by this demonstration, but this is not supported by an April 2002 cable in which Colin Powell stated that "On Iraq, Blair will be with us should military operations be necessary". 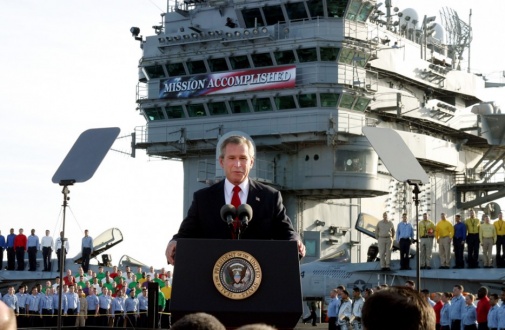 More than a million Iraqis would die as a result of this war, subsequent to Bush's minutely orchestrated "Mission Accomplished" publicity stunt in 2003

In spite of George W. Bush's claim that "You can't distinguish between Al Qaeda and Saddam when you talk about the war on terror",[6] the US never documented any connection between Saddam Hussein and 9-11, and indeed Iraq was not on the Pentagon's list of terrorist nations on September 11th. The 2003 Iraq War must be understood as a resource war for domination of the Middle East's remaining supplies towards the close of the age of cheap oil. In The Age of Turbulence (2007), Alan Greenspan wrote that "I am saddened that it is politically inconvenient to acknowledge what everyone knows: the Iraq war is largely about oil." BP

This was heavily spun but the war was basically a war of aggression, the supreme international war crime. The US tried aggressively to involve as many other countries as possible into joining its "coalition of the willing". Efforts included illegal bugging of UN offices of other countries, as exposed by Katharine Gun‎. In November 2011, the Kuala Lumpur War Crimes Commission tried former US President George W. Bush and former UK Prime Minister Tony Blair in absentia, and convicted them both for crimes against peace because of what the tribunal concluded was the unlawful invasion of Iraq.

In 2013, the United States District Court in the Northern District of California heard a legal case brought by Sundus Shaker Saleh that the Iraq war was an illegal act of aggression planned at least as early as 1998. Her charges were in some ways analagous to those brought at Nuremberg, but were dismissed in December 2014 by a ruling (citing the 1988 Westfall Act) that - since Saleh could not prove that George W. Bush, Richard Cheney, Donald Rumsfeld, Colin Powell, Condoleezza Rice and Paul Wolfowitz were not acting within the scope of their employment - they deserved the "absolute immunity" claimed for them by the US Department of Justice.[7]

The Iraq Inquiry (2009-16), a long-drawn-out public inquiry under Sir John Chilcot, took a forensic look at Britain's role in this 2003 invasion of Iraq. When the Chilcot Report was finally published on 6 July 2016,[8] the online magazine Bella Caledonia cautioned that the Iraq War had been sanitised:

"The scale, depth and method of the occupation of Iraq is a story untold in the public mind. Now it is necessary that everyone clearly understands the context for the rage against Blair and Bush domestically, and consequently the UK and the US across the Middle East.

"The lies about WMD and the claims of a 45-minute cataclysm are important. Those are deliberate lies which furnished the case for the war and are important. They opened the gates of carnage for a whole population. What follows will not be easy to read.

"But the US and the UK have to face up to their crimes for without justice there will be no peace."[9]

The Chilcot Inquiry did not consider the documents which revealed a series of meetings between UK ministers and senior oil executives in 2002.[1]

On 9 December 2020, the ICC published a 184-page report which announced the completion of its admissibility assessment of war crimes committed by the British in Iraq. The first paragraph of the Executive Summary reads:

On 13 May 2014, the Prosecutor re-opened the preliminary examination into the situation in Iraq/United Kingdom (UK).

In its 2017 Report on Preliminary Examination Activities, the Office announced that, following a thorough factual and legal assessment of the information available, it had reached the conclusion that there was a reasonable basis to believe that members of UK armed forces committed war crimes within the jurisdiction of the Court against persons in their custody.

The Office’s admissibility assessment has now been completed. For the reasons set out in this report, the Prosecutor does not conclude that the UK authorities have been unwilling genuinely to carry out relevant investigative inquiries and/or prosecutions (article 17(1)(a)) or that decisions not to prosecute in specific cases resulted from unwillingness genuinely to prosecute (article 17(1)(b)).

On this basis, having exhausted reasonable lines of enquiry arising from the information available, the Office has determined that the only appropriate decision is to close the preliminary examination without seeking authorisation to initiate an investigation.[10]

The launching of the Iraq War was itself the most serious single war crime of this century to date, and the ICC had previously ducked it by arguing that the Statute of Rome which founded the Court did not at the time of the war include illegal war of aggression among its list of war crimes. I argued then and I argue now that this did not remove that crime from its jurisdiction. The crime of illegal war of aggression was already firmly a part of customary international law and the very foundation of Nuremberg, so the ICC did not need specific mention in the Rome Statute to be able to prosecute it.[11]

Finally, although a number of communication senders have also made allegations relating to decision of the UK authorities to launch the armed conflict, the Office takes no position on legality of war given the non-applicability of the crime of aggression at the material time.

It was perhaps always Utopian to imagine that Blair, Straw, Campbell, Scarlett, Dearlove etc would pay for their crimes. But it did seem very probable that the ICC would prosecute at least some of those directly responsible for committing war crimes on the ground. Alas, the ICC has now produced 184 pages of mealy-mouthed sophistry and responsibility-dodging to justify why there will be no further investigation, let alone prosecutions. I have read the full report and frankly it makes me feel sick.[12]

In 2006, the Lancet reported a figure of 655,000 excess deaths due to the war.[13] As of September 2015, Just Foreign Policy estimated Iraqi deaths at around 1.5 million.[14] As of August 2014, Iraq Body Count estimated that as an absolute minimum, 193,000 people have been killed as a result of the war, which the site describes as "a conservative cautious minimum". Extrapolating, this would mean a death toll of around 2-4 million. In 2007 Media Lens reported that IBC's figure was approximately 5-10% of the actual number.[15]

In 2005, the USA spent more than $25 million a day on "reconstruction" of Iraq, but in 2013 the Center For Public Integrity reported that "Waste, Fraud And Abuse" were commonplace.[16]