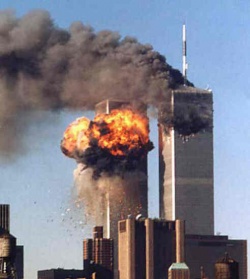 This paper was originally presented to the International Citizens’s Inquiry into 9-11 Convocation Hall, University of Toronto, 30 May 2004. It has undergone major development for publication.

Decoding the Compulsion to Disconnect

In May 2004, leading Americans and the international community were indignant at the tortures of Iraqi prisoners by U.S. occupying forces when undeniable pictures were published. Yet no-one in the media of record or anyone else in a position of public trust scrupled to observe what had started it all - the lawless U.S. invasion of Iraq in March2003, “the supreme crime” under international law, the crime which the judges at Nuremberg described as “only differing from other war crimes in that it contains within itself the accumulated evil of the whole”. The torture was, as the judges at Nuremberg had foreseen, a predictable consequence of “the supreme crime”. Yet all in official culture remained disconnected from the cause.

It was reassuring to life consciousness that the international media finally broadcast crimes against humanity instead of ignoring them. But manichean slogans of “the Free World” versus “the Terrorists” remained delinked from the criminality of the occupation itself. That the U.S. focus of concern was “damage to America’s image” indicated the nature of the problem. Although the Red Cross had reported that 70-90% of the torture victims were ordinary citizens picked up at random, this did not diminish cries for redirecting attention back to “the real danger, the terrorists endangering America”. That the official Taguba Report itself was not permitted to question anyone above a part-time reserve-army woman officer (who was kept out of the interrogation room by U.S. Defence Intelligence), was nowhere reported as evidence of top-down control. That the far worse crimes of maiming and killing defenceless Iraqi women and children by bombs were delinked from the torture regime inside the prisons indicated that the murderous blind eye was still closed.

In fact, documented reports of criminal abuse of prisoners by U.S. forces had been coming in to high command since the invasion of Afghanistan in 2001 with no decision to stop the routines. “Stress positions”, “humiliation”, “use of [attack] dogs”, “sleep deprivation”, “subjection to noise”, “prolonged isolation”, “food and water deprivation”, “restriction of toilet facilities”, and “diet denial” were the generic orders. Yet ever since November 13, 2001 shortly after 9-11, Presidential decree had unilaterally overridden the U.S.-signed Geneva Convention of 1949 on the Treatment of Prisoners for the first time in its history. Anyone who objected was deemed to be “lending support to terrorists”. The TV public itself daily watched prisoners - never charged or tried under any due process of law - hooded, shackled and limb-trussed, there were no visible asked questions about the brutality of the abuse, nor about the colonial occupation of the Cuban territory to perpetrate the crimes. What was central was “the torture scandal” and opinions on how to manage perception of it. Accordingly, “communist Cuba” was subjected to new and crippling sanctions for its “human rights abuses” as the state of siege by illegal U.S. embargo and destabilizations was stepped up. The Orwellian set-points of meaning did not arouse media or expert questions.

What could explain the systematic disconnect from reality with no consciousness of it? It was not confined to the U.S. Right or even the U.S. As the torture regime was exposed, the omnipresent liberal intellectual, Michael Ignatieff, urged fellow Canadians on public television to build up their military to join the U.S. in enforcing “human rights” across the globe. The disclosure of the videotaped Iraq tortures after years of lawless prescription was itself revealing of the selective mind-set at work. In fact, the story of U.S. torture on 60 Minutes in late April 2004 was a broadcast that had been held back for weeks because its pictures of torture by Americans were “not very patriotic” to show.7 Only when “CBS heard that Seymour Hersh, working for the New Yorker” was planning to publish fresh photographs - - and a damning report [by the army itself] - - did the network decide to go ahead”. Until the reports came out elsewhere first, the facts could not be seen. In consensual closing of the doors of perception, the documented evidence was blocked out as non-existent.

Throughout, U.S. concern remained narcissistic. “America is suffering a blow to its international image”, the elite and the many regretted with indifference to the fate of the victims about whom there was no further interest. The fatal pattern was overlooked that tells all - that the U.S. security state repudiates any law if it protects the lives of people outside itself. Since “America’s defence of its interests and investments” abroad entails the right to reject whatever is deemed inconsistent, it follows that its right is to act above the law. In the words of the U.S. September 2002 National Security Strategy document:

“We will take the actions necessary to ensure that our efforts to meet our global security commitments are not impaired by the potential for investigations, inquiry, or prosecution by the International Criminal Court (ICC), whose jursidiction does not extend to Americans and which we do not accept”.

Not only immunity from international criminal law was thus assumed. Unilateral American repudiations of the Convention for the Prevention of the Crime of Genocide, the Kyoto Protocol, the Rights of Children, the Landmines Treaty, the Convention Against Racial Discrimination, the Comprehensive [Nuclear Bomb] Test Ban Treaty, the monitoring and testing requirements of the Chemical and Biological Weapons Treaties, the Covenant for Economic, Political and Cultural Rights of Nations, and the proposed Treaty on the Limitation of the Military Use of Outer Space all continued with no joining of the dots by expert commentary. What repels the pattern from view? Something deeper than class and faction is at work. A regime of meaning operates across classes and scientific disciplines themselves to disconnect the elements so that the whole cannot be seen. To be above the law - including laws applied by the U.S. to prosecute others - was assumed by all as “America’s leadership of the Free World”. Silently, the impunity that once only God-Kings pretended was internalized by other states and the UN itself as the regulating freedom of globalization.

Exposure of the U.S. torture regime in Afghanistan and Iraq left the impunity intact. The pictures made plausible denial impossible, but the criminal occupation of Iraq continued with renewed UN support on June 8, 2004. Only disconnected pieces were perceived. The “War on Terrorism vindicated all. That the same justification was used decades earlier by the Third Reich was not observed, least of all by those invoking “appeasement of Hitler” as a justification to invade poor non-industrialized countries. The comparison was unthinkable through America’s lenses of self-conception which assumed itself as “the society of human rights”.