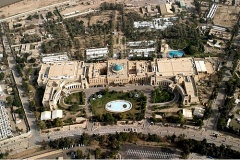 US Embassy "visible from space"

As the Chilcot Inquiry is finally published, the media circus begins. Tony Blair will get a rough ride. The media have already gone for him. His legacy is in tatters, Iraq has been a failure, and he will never be forgiven by the public. Indeed, his political party is now led by one of his arch opponents as a direct result of Iraq.

But in reality it remains sanitised. The war you don’t see, the occupation that has gone unreported, is too difficult for sections of the Western press and the vast majority of the political class to stomach. They cannot accept that the UK and the US have committed the most heinous acts in Iraq. It rocks the possibility of their moral superiority, and it makes it more difficult to have a ‘balanced debate’ on the issue, as Tony Blair plays the media circuit in the weeks and months running up to Chilcot. Today it must come to the surface.

The scale, depth and method of the occupation of Iraq is a story untold in the public mind. Now it is necessary that everyone clearly understands the context for the rage against Blair and Bush domestically, and consequently the UK and the US across the Middle East. The lies about WMD and the claims of a 45-minute cataclysm are important. Those are deliberate lies which furnished the case for the war and are important. They opened the gates of carnage for a whole population. What follows will not be easy to read. But the US and the UK have to face up to their crimes for without justice there will be no peace.

Much of what unfolds is committed by the US Armed Forces given their much larger ground force and by the intelligence services. The key that Blair and the British State provided was the geopolitical cover to allow the invasion and occupation to take place. The real story of the occupation would never reach CentCom, the US press centre set up in the Green Zone. It is important not to start with the range of illegal weapons that were used, but with the methodology of the occupation. Like all oppressor occupations, it was based on subjugation and humiliation. In addition, far from building civil society, it was to be hollowed out, and tensions between groups fomented. Every aspect of Iraqi society was to be torn asunder – deliberately.

We talk about the oil deals that went on with Halliburton, what we don’t know about is the fact that Iraqi seeds were privatised and sold off to international agri-business. This was part of a process of disrupting a centuries old farming method and is outlined in Order 81 established by the Coalition Provisional Authority in 2004.(1) Farmers were to bear a considerable amount of occupation malice.

In the early days of the occupation – to make sure they knew who was boss – the US Army conducted a planned operation of bulldozing Iraqi crops including dates, oranges and lemons. This was part of a collective punishment of farmers who the US and UK claimed were hiding anti-occupation guerrilla fighters. As they destroyed the crops, they played jazz music to show how little they cared. One farmer said:

“They made a sort of joke against us by playing jazz music while they were cutting down the trees.”

Sheikh Hussein Ali Saleh al-Jabouri was a member of a delegation that went to the nearby US base to ask for compensation for the loss of the fruit trees. He said US officers described what had happened as “a punishment of local people because ‘you know who is in the resistance and do not tell us’.”(2)

Collective punishment and brutalising humiliation was to become world news when it became clear the extent to which torture was being committed in US-run jails. The inhabitants of these jails would very often be taken from their homes, without reason or recourse.(3) Records were barely kept, so family members were left in abject horror in the aftermath of their home being raided, as they had no idea what jail their loved one (usually a father, brother or son) had been taken to. But the the extent of the torture is classified. Think about what we already know, and what is being classified and consider the extent of the terror this inflicted on Iraqi society.

What you will never hear being discussed is Copper Green – one of several names for a US Black Ops program, formed with the direct approval of the then Secretary of Defense Donald Rumsfeld, who told special access members to “Grab whom you must. Do what you want.” The program designed physical coercion and sexual humiliation techniques for use against Muslim men specifically. This was the precursor to the systematic torture of Iraqis.(4)

You may not be aware that Iraqi academics were systematically assassinated – hundreds of them.(5) By April 2004 the Iraqi Association of University Teachers (AUT) reported that 250 academics had been killed. By the end of 2006, according to The Independent, over 470 academics had been killed. The Guardian reported that about 500 academics were killed just from the Universities of Baghdad and Basra alone. We don’t know who murdered these people, but we do know that they were professional hits. Whatever the case, the occupation forces were too busy securing oil fields to set up protection for important elements of Iraq civil society.(6) There are now calls for an investigation given that we now know via WikiLeaks that innocent civilians were targeted for assassination.(7)

Illegal munitions were used over civilian population centres. Infamously White Phosphorus was used over Fallujah. White phosphorus is fat-soluble and burns spontaneously on contact with the air. According to globalsecurity.org:

“The burns usually are multiple, deep, and variable in size. The solid in the eye produces severe injury. The particles continue to burn unless deprived of atmospheric oxygen… If service members are hit by pieces of white phosphorus, it could burn right down to the bone.” As it oxidises, it produces smoke composed of phosphorus pentoxide. According to the standard US industrial safety sheet, the smoke “releases heat on contact with moisture and will burn mucous surfaces… Contact… can cause severe eye burns and permanent damage."(8)

In addition to suffering from use of such weaponry, such was the scale of the destruction in Fallujah that American forces dumped the bodies of dead Iraqis into the Euphrates river and in football stadiums.(9)

The number of civilians killed ranges from The Lancet's 650,000 figure (10) up to a million.(11) By 16 February 2007, António Guterres, the United Nations High Commissioner for Refugees said that the external refugee number fleeing the war reached 2 million and that within Iraq there are an estimated 1.7 million internally displaced people. It is now thought to be as much as double that number. Civilians are suffering the use of depleted uranium tipped shells, and with chaos ending around them – ISIS have sought to move in, adding to the carnage. Millions of people’s lives lie in ruins. The numbers are incomprehensible. The outcome for Iraqis is utterly dire. Not so the oil corporations, and not so for life on the permanent US bases.

While buildings lie in ruins and with water and electricity in short supply, the Americans (again we need to reinforce the door opened by Blair and Britain) – set about building what would be known locally as ‘George W Palace'.[1] On the Baghdad sky line the new US Embassy houses thousands of offices for up to 8000 staff, has a cinema, restaurants, an Olympic-sized swimming pool and a plush function centre. It is so large it is visible from space. It is larger than the Vatican City. It is a monument to destruction, imperial arrogance and oppression.[2]

The human cost is devastating. The lies and propaganda deployed for this war unravelled before the first shot was fired. Now the build up to war has been categorically demolished by the Chilcot Inquiry. As well as the unthinkable toll suffered by Iraqis, US and UK soldiers went to their death. Today many of their families have spoke out against the war, and against Blair. Many soldiers have come back so disturbed by what they have seen they are now trenchant anti-war campaigners. The full horror of what Blair unleashed will never be truly understood in the West. And, internationally the full consequences of this war are still to be felt. Today Blair is finished, and the process around trying him for war crimes will begin. As the sister of a soldier killed in Iraq said in the press conference that followed Chilcot:

“There is one terrorist in this world and his name is Tony Blair.”

Blair made it possible for the US to go to war. Together they unleashed hell on a whole population: families, young couples starting their lives, the elderly, children, the farmer and the academic. They did so based on a consciously built framework of lies to build anglo-American power in the region. And for that it is not just Blair who must be held to account. Every MP, every agitator for this war – from Jim Murphy to David Aaronovitch – will be judged by history in the most scathing terms. Every MP who voted for this war is now formally morally finished. British imperialism now on decline must now end.

Today is the end of Chilcot and the cementing in officialdom of the arguments the anti-war movement have made for 14 years. But it is also just the start. We must now move quickly to begin legal proceedings that see Blair – and be rest – lined up in The Hague for war-crimes tribunals.[3]