Jörg Haider was an Austrian right wing politician with many mighty enemies, who died under suspicious circumstances. He was Governor of the province of Carinthia on two occasions, the long-time leader of the right wing populist Austrian Freedom Party (FPÖ) and later Chairman of the Alliance for the Future of Austria (BZÖ), a breakaway party from the FPÖ.

In 1970 Haider became the leader of the FPÖ youth movement and headed it until 1974. He became party chairman in 1986.Under Haider's leadership, the FPÖ moved to the right, reflecting Haider's nationalist, anti-immigration, and anti-EU views, with an independent, neutralist foreign policy. This caused no end to comparisons to Hitler, especially in the NATO aligned, transatlantic press, no matter how farfetched these comparisons in reality were. From 1986 when Haider became the FPÖ's chairman the party's share in elections rose from 5% in the 1983 elections to almost 27% in 1999.

In 2000, Haider's Freedom Party unexpectedly became second after the Social Democrats (SPÖ) in the 1999 parliamentary elections. After efforts by the runner-up, the mainstream right wing ÖVP, to renew its coalition with the Social Democrats failed, the ÖVP reached an agreement with the FPÖ. Normally, Haider should have become chancellor. Deemed too controversial to be part of the government, let alone head it, he stepped aside in favor of ÖVP leader Wolfgang Schüssel.

The coalition caused widespread outrage both in Austria and the rest of Europe. The heads of government of the other fourteen EU members decided to cease cooperation with the Austrian government, as it was felt in many countries that the cordon sanitaire against coalitions with parties considered as right-wing extremists, which had mostly held in Western Europe since 1945, had been breached. For several months, other national leaders shunned diplomatic contacts with members of the Schüssel government.

At the end of February 2000, Haider stepped down from the leadership of the Freedom Party. This was widely regarded as a cynical move to appease foreign criticism, as he appeared to continue to control the party from behind the scenes, with his successor, Vice-Chancellor Susanne Riess-Passer, being only pro-forma in charge.

After heavy external pressure, the FPÖ, whose chair was Haider's sister, Ursula Haubner, was riven with internal strife. On 4 April 2005, Haider, Haubner, Vice Chancellor Hubert Gorbach and other leading figures of the FPÖ announced the creation of a new party called Alliance for the Future of Austria (BZÖ) with Haider as leader. In effect, this split the FPÖ into two parties.

In the 2006 general elections, the BZÖ received 4.1% of votes, thus narrowly securing its representation of 7 seats in parliament. The FPÖ, now led by Heinz-Christian Strache surpassed initial expectations, receiving 11.0% of the vote.

Haider on the 2008 banking crisis

“What we need is protection from ruinous products, because in reality the banks are a giant mafia which has poisoned the whole world with these products. Everything was transported away from America so to speak and today nobody wants to be responsible. It will be played out again at the expense of the little man, he will lose jobs, he will lose his income. The big men are certainly not going to be punished.”
Jörg Haider (2008)  [1]

Haider visited Iraq to meet Saddam Hussein twice, one time on the eve of the attack on Iraq in 2003, as well as having had a friendship with Muammar Gaddafi when Libya was very hated in Western capitals.

In 2010, the Austrian magazine Profil (journalist: Michael Nikbakhsh) tried a smear job on Haider and party colleague Ewald Stadler, bearing all the hallmarks of having been spoon fed to the media by Western intelligence services via their puppet Iraqi government.

The magazine received a dossier written as part of an 2008 investigation "from the Iraqi Ministry of the Interior - both in Arabic and in the English version of a translation agency based in Damascus, Syria. It is a note from the Department of Internal Affairs and Security dated May 22, 2008, marked Top Secret"...."The investigation proved that the two gentlemen had received the amount of five million US Dollars from Saddam Hussein against their services to him. Stadler received three million seven hundred and fifty thousand US Dollars, and Dr. Jörg Haider received the rest, which is one million two hundred and fifty thousand US dollars."[2]

The same article also reported from anonymous sources in Haider's entrourage, "that Libya's head of state Muammar al-Gaddafi - Haider visited him three times in any case - is said to have several times sent 150,000 to 200,000 dollars cash, 'firmly sealed in plastic', to Austria."

Similar stories were reported in the English speaking press, upping the figure to a whopping "$58.7m transfer from Gaddafi, as well as more than $13.3m that unidentified individuals brought home from Iraq."[3]

He called the 2nd Iraq war a war of aggression and George W. Bush a war criminal.[4]

“Asked about the impression that Saddam is better for him than Bush, Haider said: "The choice is really hard for me. Both have been at war with international law and committed human rights violations. The one is lucky enough to command a world power, hence the power to write the laws, while the other has been a weak dictator"”
Jörg Haider [5]

It has been reported that the Mossad spied on Haider to gather information about his contacts in the Arab world[6][7] through fellow FPÖ member Peter Sichrovsky.[8]

Haider died of injuries from a car crash at Lambichl near Klagenfurt, in his home state of Carinthia, in the early hours of 11 October 2008. Police reported that the Volkswagen Phaeton that Haider had been driving came off the road, rolled down an embankment, and overturned, causing "severe head and chest injuries". An initial investigation by the Austrian police reportedly uncovered no signs of foul play. Haider's blood alcohol level at the time of the crash was 1.8 mg/l, more than three times the legal limit of 0.5 mg/l. 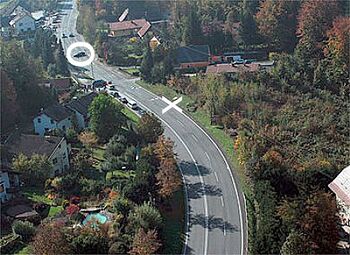 Aerial overview of the crash site, at the X the car is leaving the street

Inconsistencies appeared immediately after the accident:[9]

Manipulation of the wreck

Some investigators, like Wolfgang Eggert[10] and Gerhard Wisnewski,[11][12] doubt that the wreck of the car has been in a 140 km/h (alternatively 170 km/h) head-on accident. Wisnewski's analysis is particularly notable, since he traveled to the village and surrounding area and located the wrecked Phaeton in a garage and so, was in a position to make close up pictures. Both hinges and lock of the left door (front) were intact, attached to the body of the car and in regular position. When these doors have been ripped off during the accident they should have been ripping out, or bending these attachments as well.

Official photos that show the wreck on the street reveal that the car has limited damage directly to the front and overall no compression in length. Especially notable is the bumper, which seems to be relatively intact and the cooler behind also. In a head on collision at high speed those would be the parts to get the most direct impact. Wisnewski's conclusion is that the wrecked car did have a different "accident" at stand still, according to him it is rather likely that something rolled over the car.

Eggert speculates that the car has been prepped elsewhere and has been placed there on a staged accident scene, it is not the car of Jörg Haider. The car at the accident site did not have any plates so identification by this wasn't possible. Haider was killed elsewhere and then put into the prepped car and carried to the scene. He was reported to drink alcohol and snort cocaine which he may have done under the influence of a drug that takes away the will of a person, see Scopolamine. The car is as of 2020 still kept by supporters of Haider for another evaluation.

The Haider case - serious source of investigate material (in German)