Prisons are places where people are held against their will, typically by authorities, generally as a result of a legal infraction or on grounds of poor mental health, although Illegal detention is increasingly used on suspected "terrorists". Prisons around the world vary widely in appearance.[1]

The official narrative is rather confused on this point. Wikipedia lists several justifications for locking up people, with little in the way of empirical evidence. As with its partner institution, school, discussion is encourage about how it should happen rather than why or whether.

As Ivan Illich, Angela Davis and others have argued, the evidence appears to show that such treatment tends to promote rather than reduce crime, so makes sense only from a point of view of retribution rather than harm reduction or damage restoration.

The US locks up a larger proportion of its citizens than any other nation state. Non-violent prisoners have been locked up for life. The US prison system has 10% private prisons.[2]

In 2015, EFF reported that a FOIA request had revealed at least one inmate in a South Carolina prison was receiving more than 37 years in isolation for using Facebook.[3] In 2015, an autopsy of Samuel Harrell revealed that he died not, as authorities had claimed an overdose of synthetic marijuana (K2), but of homicide after "physical altercation with corrections officers" (interviews suggested that as many as 20 corrections officers kicked, punched and dragged him down a flight of stairs while he was handcuffed).[4] 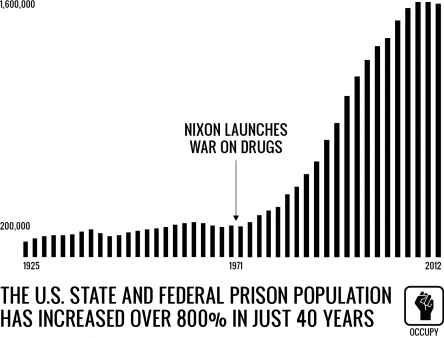 The "War on Drugs" has provided a huge boost to prisoner numbers (now around half US prisoners are incarcerated for non-violent drug offences), and allowed prison populations to keep growing even as rates of other crimes dropped.

Confining people against their will uses up a lot of resources, and so in this age of privatized prisons allows a small number of people to garner immense profits, providing an incentive to increase incarceration rates. Some judges have been found to be involved in corrupt "cash-for-prisoners" scams.

In 2020 The Lancet published a letter by 117 doctors from 18 countries that concluded:

“Should Assange die in a UK prison, as the UN Special Rapporteur on Torture has warned, he will effectively have been tortured to death. Much of that torture will have taken place in a prison medical ward, on doctors' watch. The medical profession cannot afford to stand silently by, on the wrong side of torture and the wrong side of history, while such a travesty unfolds. In the interests of defending medical ethics, medical authority, and the human right to health, and taking a stand against torture, together we can challenge and raise awareness of the abuses detailed in our letters. Our appeals are simple: we are calling upon governments to end the torture of Assange and ensure his access to the best available health care before it is too late. Our request to others is this: please join us...”
117 doctors (February 2020)  https://www.thelancet.com/journals/lancet/article/PIIS0140-6736(20)30383-4/fulltext [5]

Vladimir Lenin brought back forced labor of political prisoners in labor camps from 1918[6][7], the "Main Directorate of Camps" internationally now known as GULAG became a system extensively utilized by the Soviet Union. Although Nikita Khrushchev had denounced the system of Soviet totalitarianism these prison camps were a product of after Josef Stalin died, Khrushchev secret speech denouncing it was silenced[8] and prevented from being widely published. Aleksandr Solzhenitsyn and his 1973 book The Gulag Archipelago: An Experiment in Literary Investigation' became the first of an intensive raw and brutal series of insights into the system of these secret sites, which caused it to be picked up by the public, becoming a widely used tool in propaganda by Shin Bet and the US and Russian TV well into the 2000s.[9][10]. The KGB had confiscated many of Solzhenitsyn's gathered information from 1959 until 1967 and tried to delete all traces of drafts of the book during the Cold war, assassinating several holders of reserve master copies of the book.[11][12][13]

In 1939, the British War Office sequestered a mansion in London (owned by a friend of Winston Churchill named Philip Sassoon) called Trent Park[14] for “special purposes,” with no comment further made on why or what would be conducted there. The site - a mansion in fine condition - houses Adolf Hitler’s captured generals[15], POWs and other military officials that were captured on the African or European continent. The mansion was nowhere classified as a prison or internment camp, and after brief interrogation, many generals were treated exceptionally well in the mansion, being able to go daily hiking around the perimeter and getting gifted expensive drinks, not realizing the building was in fact a government non-declared prison where every room was bugged from top to bottom. In 2010 the BBC revealed dozens of protocols and several bombings were ordered because of information gained in Trent Park.[16]

The success of the plan led to other plans such as Operation Epsilon - where Nazi-scientists who were responsible for The Nazi atom bomb programme were placed in a different mansion.[17] The US had their similar own secret prison called "P. O. Box 1142[18]", after the mailing address, a separated section of an US Army base in Virginia. This US secret prison formed the basis of Operation Paperclip, where the Nazis who were brought in by the US would form and lead new US top-secret military science projects, although being sought for war crimes in ally-occupied Germany.

Up until the late-stage golden age of TV, which occurred somewhere in the 1990s in the west[19], many prison camps fit the term for black sites as social media, cable-TV & intercontinental travel weren't as normal as in the 2000s and journalists simply couldn't report these locations. Many countries and entities have utilized prison camps for engaging in numerous illegal activities, often during war-time, including rape, abduction, illegal drug trade & experimental research-projects.

Nevada is home to "Area 51", the common name of a highly classified US Air Force airfield and test location officially called Homey Airport (KXTA) or Groom Lake (after the salt flat situated next to its airfield). The place is steeped in history with UFO sightings (stimulated by spooks such as Ulius Amoss[20] and W. Stuart Symington[21]) that has caused virtually all theories regarding the need for such secrecy to be just "conspiracy theories", nevertheless in 2013, the CIA released an official history of the U-2 and OXCART projects from the 1950s up until the 1970s which acknowledged the existence of Area 51 in response to a FOIA request submitted in 2005.[22] In 2012, a BBC crew who attempted to walk past security "watching TV" and enter the base was held a gunpoint, detained for 12 hours, while the FBI took their equipment, told the crew "that this incident was so serious that Washington had to call London to advise that 12 'Brits' had just breached security at America's most top-secret military base and that we all were at one point going to jail for six months", and that they escaped the punishment named "make you disappear and your body will never be found"[23], being tailed by FBI for the remainder of their stay in the US, raising questions what is happening there.

In the 2010s several websites hosted by US military-veterans accused the US Air Force black projects developed in Nevada as responsible for the "black triangle planes" sighted in the US. The spotted triangles would belong to the "TR-3B Aurora Anti-Gravity Spacecraft".[24][25]

Alcatraz was already known for decades, if not more in the 1950s but the prison in fact housed several political and foreign dissidents that were placed there specifically because of the "silence rule[26]" reported by dozens of prisoners. Communicating between prisoners was completely forbidden and met with severe violent consequences. Spooks like Morton Sobell - who was sent there in the 1960s - had no chance of communicating whatsoever with unknown handlers, with other politically high-profile individuals getting to see new (for that time) methods of security apart from the violent crackdowns as the prison was noted to "not have any public oversight, both geographically and politically.". After the closing of Alcatraz, USP Marion was created as a high-tech replacement for Alcatraz, and 500 of its prisoners were transferred there. A new prison regime with the vague, name of "CARE" was implemented, which later became the "Control Unit". In 1990, former warden Ralph Arron told Mother Jones that “The purpose of the Marion Control Unit is to control revolutionary attitudes in the prison system and the society at large". recalling the government even requested more severe[27] prison regimes. These regimes became the basis of the new US national Supermax-prisons.[28]

The High-Security Unit in the federal women’s prison of the Federal Medical Center in Lexington, Kentucky, was created in 1986 to place political prisoners belonging to any organization that, according to the Bureau of Prisons, “attempts to disrupt or overthrow the government of the U.S." The HSU in fact, was nothing more than 16 individuals' isolation cells separately build and placed from the prison itself.[29] Within two years, the prison was shut down after media coverage[30]. In secret the prison made the women live in constant artificial lights 24 hours a day, without any personal property and with a camera and visual surveillance every minute. Contact with the world was severely limited and visits restricted. There were frequent cavity searches done by male guards considered "constant sexual harassment" by prisoners. The women were also subjected to tests such as waking them every hour during the night, or every half hour after several complained. The American Civil Liberties Union later concluded the goal of the prison was "ideological conversion", as the regime was deemed not proportional at all.[31]

An Australian woman was arrested for setting fire to one in Queensland.[33]