The Cold War II (or Cold War 2.0) refers to a reprise of the first Cold War which ended in 1990. The reboot has gradually gathered pace and intensity since at least the early 2000s, and swung into high gear after the 2014 coup in the Ukraine. The basic narrative, like the original cold war, is of a "West versus East" conflict, cited as increased reason to increase military spending and increase control over one's own population.

In recent years, increasing efforts appear to have been underway to promote Cold War 2.0 through Russophobic messages in commercially-controlled media.

The encirclement of Russia is a tactic by the United States, utilizing NATO, to place military capability (not necessarily through many soldiers or equipment) close to the territory of Russia.

US exit from the ABM Treaty

The Anti-Ballistic Missile Treaty (1972–2002) was an arms control treaty between the United States and the Soviet Union on the limitation of the anti-ballistic missile (ABM) systems used in defending areas against ballistic missile-delivered nuclear weapons. It was intended to reduce pressures to build more nuclear weapons to maintain deterrence. Under the terms of the treaty, each party was limited to two ABM complexes, each of which was to be limited to 100 anti-ballistic missiles. In 1997, five years after the dissolution of the Soviet Union, four former Soviet republics agreed with the United States to succeed the USSR's role in the treaty. In June 2002 the United States withdrew from the treaty, leading to its termination, citing risks of nuclear blackmail (ie threat from smaller nuclear armed states).[1]

Russia took this unilateral decision as the reason the exit from the Strategic Arms Reduction Treaty (START II would have come into effect at the time) [2] and warned that this decision would trigger a new arms race.[3]

The 2008 Russo-Georgian War was a war between Georgia, on one side, and Russia and the Russian-backed self-proclaimed republics of South Ossetia and Abkhazia, on the other in the strategically important South Caucasus region. It took place in August following a period of worsening relations between Russia and Georgia. It is regarded as the first European war of the 21st century. Georgia was armed with all kinds of western weaponry [4][5] and received training from external advisors.[citation needed] Shortly before the war, a deal about Israeli Merkava tanks was cancelled, or refused (depending on the account).[6]

In November demonstrations and civil unrest began in Ukraine. The protests were sparked by the Ukrainian government's sudden decision not to sign the European Union–Ukraine Association Agreement.

A reappearance of the Woodpecker signal has been reported by radio amateurs worldwide.[7][8][9] According to Globalsecurity.org, it is the new Russian OTH radar system Kontayner with an estimated range of 3000 km.[10][11] 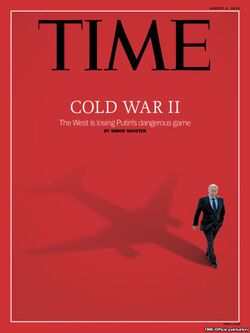 In March 2018, following the attack on Sergei Skripal, AP introduced a story "From Washington to Warsaw, Western nations banded together Monday to expel more than 100 Russian diplomats they accused of being spies."[18] Dan Kaszeta published an article for the Integrity Initiative entitled Demolishing the Kremlin's absurd theories about Novichok and Porton Down in which he attacked theories that challenged the UK Deep state's official narrative.[19]

The encirclement of China has been called as an extended division of this trend. China (and in particular their Belt and Road Initiative) has been the target of several IfS, NATO and US Congress members their lectures, such as Sijbren de Jong and Tom Cotton.

“The United States remains the world’s leading power with global interests, and it cannot afford to choose between Europe and the Indo-Pacific. Instead, Washington and its allies should develop a defense strategy capable of deterring and, if necessary, defeating Russia and China at the same time.”
Matthew Kroenig,  Atlantic Council (February 18, 2022)  [20]

Although the Cold War 2.0 concept was originally formulated with Russia in mind, China has emerged as a focus of the US Deep State. Controlled media focused on China's rapidly [21] structural influence in technology, even being responsible with their state companies such as Huawei[22][23] for securing European governments their vital ministerial departments.

As a result of the shutdown of many parts of the global supply chain, Taiwan came under scrutiny[24][25] for being the de facto sole supplier of computer chips (or semiconductors specifically) for a wide variety of products.

Shortages for every product requiring computer chips, tariffs by the US & EU and increased tensions surrounding Taiwan and Hong Kong, caused prices for computer chips and similar components to skyrocket, making the world extremely[26] dependent on a rapid recovery of the Chinese (or Asian) economy[27]. During the 2022 Russian invasion of Ukraine China aligned with Russia by increasing imports to counter an economical recession of the Russian economy and not voting for a military response in the UN Security Council. 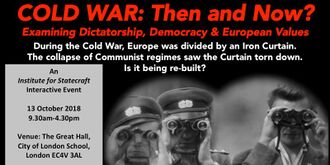 Advertising for an event at the Institute for Statecraft.

Cold War Then and Now‎‎? was a conference on 13 October 2018 that was booked by Simon Bracey-Lane of the Institute for Statecraft, later to be exposed as a Russophobic disinformation outfit controlled by the UK Deep state, funded by the UK/FCO and the UK/MoD.

Edward Lucas of the Economist underlined the importance of these links in his books Deception and The New Cold War. Speaking at the Frontline Club in London in 2014, he said that no significant Russian company can operate without a licence from the state in the form of bribes in one form or another; that comment should be extended to the major criminal groups.

On 5 November 2018, 'Anonymous' leaked documents about the Integrity Initiative which used funds from the UK/FCO and the UK/MoD to promote anti-Russian disinformation[28][29][30] by coordinating "clusters" of apparently independent journalists.