The US has more nuclear weapons than any other nation state.

In 1945, the US became the only state that used nuclear weapons against a civilian population.[1]

The USSR continually lagged behind the USA in production of nuclear weapons.

The US MICC organised Team B, which carried out a misinformation campaign to promote ideas such as the "missile gap" to try to promote weapons spending.

As a signatory to the Nuclear Non-Proliferation Treaty, it is obligated to try to curb the spread of nuclear weapons. 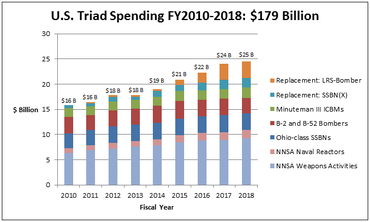 The US spends tens of billions of dollars annually on nuclear weapons.[2]