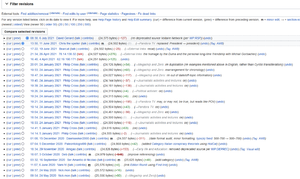 Giulietto Chiesa was an Italian journalist who increasingly found himself at difference with the dominant narrative on a number of issues, notably September 11, 2001 and the New Cold War declared against Russia.

Because of this, he became a person of interest for the Italian section of the Integrity Initiative. His Wikipedia page has been edited by the suspected intelligence operative Philip Cross.

Chiesa had long political experience, first as a university student manager in Genoa, and nationally (Vice-president of the Italian Goliardic Union), then as a national manager of the Italian Communist Youth Federation (FGCI), finally as a leader of the Federation Genoese of the PCI in the years 1970-1979. He was group leader for the PCI in the Provincial Council of Genoa from 1975 to 1979, when he left the party official and was hired by the newspaper L'Unità, in Rome. From 1 October 1980 to 1 September 1990 he was correspondent in Moscow for L'Unità.[1]

In 1989-1990 he was a Fellow of the Wilson Center, Kennan Institute for Advanced Russian Studies, in Washington, where he attended lectures in fifteen American universities and research institutes, the State Department, Rand Corporation etc. In 1990 he joined the "Stampa", still as a correspondent in Moscow, and remained in Russia until the end of 2000.[1]

During his time in Moscow he collaborated (totally free of charge) with "Radio Liberty". During the same period he also wrote as a commentator for “il Manifesto” and other Italian newspapers and magazines.

In the 1990s he collaborated with almost all Italian television publications, with "Radio Svizzera Internazionale", with "Vatican Radio", with the "BBC World Service" in Russian, with the Russian television channels ORT, RTR and NTV, and with “Deutsche Welle”, and with Radio Liberty from Moscow. He has appeared numerous times on “Rai News 24” and in various RAI programs, including “Primo Piano” on Rete 3.

He has written several books, many on the subject of history, news and reports on the Soviet Union and Russia.

In 1999-2000 he founded “Megachip”, an association that dealt with critical analysis of the functioning of the mainstream media. The association then also created an in-depth website (www.megachip.info) which by 2010 had more than 100 million page views.[1]

From the end of the 1990s he began to follow the problems of globalization and, in particular, its effects on the world media system. The participation of Giulietto Chiesa in the foundation of the "World Political Forum", based in Turin, under the presidency of Mikhail Gorbachev, fits into this context. In 2010, former President Gorbachev continued his international research activity by founding the “New Policy Forum” in Luxembourg, of which Chiesa was a member of the Advisory Board.

After returning to Italy he wrote several other books, along with dozens of essays. He wrote "G8-Genova", a chronicle of the events during the G8 summit of July 2001, the book "Afghanistan anno zero" together with the satirist Vauro, which remained at the top of the charts for a year, having exceeded 115 thousand copies sold. In the spring of 2002, "La Guerra Infinita" (The Infinite War) was released, also a bestseller.

On the eve of the American attack on Iraq in 2003, together with a large group of volunteer journalists, he promoted the “No War TV”, an independent satellite TV experiment.

In 2004 Giulietto Chiesa was elected to the European Parliament for the Italy of Values. After a disagreement with the party leader di Pietro, he abandoned the parliamentary group of the Liberals and Democrats, in which he had joined at the request of Di Pietro, and joined the Party of European Socialists group as an independent. [1]

In 2007, Chiesa published two books: “The secret prisons of the CIA in Europe”, written with two of the closest collaborators, Francesco De Carlo and Giovanni Melogli. And “Zero. Because the Official Version on September 11th is a fake", a collective volume, edited together with another of his collaborators, Roberto Vignoli, to which the author contributed with the Introduction and an extensive essay on geopolitics entitled "Europe, because Mars has defeated Venus”. In October 2007 the Rome International Film Festival hosted in the documentary section a film "Zero, inquiry into September 11" made by a working group, promoted by Giulietto Chiesa, led by Paolo Jormi Bianchi, directed by Franco Fracassi and Francesco Trento.

In April 2009 he ran for the European elections in Latvia, in the party “For the Defense of Human Rights in a united Latvia”, in defense of the disenfranchised Russian minority in the country, but was not elected.

In 2010 he produced two books. The first entitled "La Menzogna Nucleare", (the Nuclear Lie) written jointly with the physicist Guido Cosenza and the eco-physicist Luigi Sertorio. With the same publishing house, in autumn, “Il Candidato Latone (Unpublished Adventures of an Alien in Europe)”, a reportage book of the electoral campaign in Latvia, was published.

In 2011, on the tenth anniversary of September 11, a new volume of “Zero” was released, this time titled “Zero2” The smoking guns", opened by a long essay that focuses on all the new evidence (this time no longer just clues and questions, but real, detailed indictments) that demonstrated the falsity of the official version of 11 September in at least seven incontrovertible points. The essay remained at the top of the sales chart for a few weeks. Also in 2011, written with Pino Cabras, “Barack Obush” was released.[1]

Chiesa became increasingly popular on social media. His Facebook page becomes a crucial communication tool. At the end of 2014, at the time of his detention and subsequent expulsion from Estonia for his 'pro-Russian views'[2], the coverage of posts exceeded 1,300,000 people. In moments of the most acute international political crisis, in 2015, attendance figures often exceeded 500-700,000, placing Giulietto Chiesa among the top ten Italian political bloggers.

At the beginning of 2014, Pandora TV (www.pandoratv.it) was founded, which at the end of 2018 could boast a formidable success of viewers and supporters, with tens of thousands of daily viewers, with Giulietto Chiesa as editorial director and managing director.

Also in 2015 a new volume appeared, "The storm has arrived", with the preface "The mysteries of Paris" dedicated to the terrorist attack in Paris against the editorial staff of the satirical weekly "Charlie Hebdo", and again doubting the official narrative.

In 2016, the new book by Chiesa, called “Russofobie 2.0”, was published in French, peing published at the same time as “Putinfobia” in Italian.

In 2016, on 22 February, he received the "Bunin Prize", from the Pedagogical University of Moscow, "for his significant contribution to the defense of freedom of speech and the elevation of Russian culture, together with his long-standing and fruitful literary activity".

In the same year was part collective of writers who wrote the book "DNA of Russia, Essays on Vladimir Putin, Russia and the World".

In 2018, 21 August, he received the Order of Friendship from the President of the Republic of South Ossetia, and the role of Representative of the Parliament of the Republic of South Ossetia at the European Parliament. On November 5 of the same year he received the title of Academician and Full Member of the International Academy of the Russian Language.

At the end of 2018, the book "9/11 Unmasked", edited by David Ray Griffin and Elizabeth Woodsworth, published the results of the five-year work by the Collettivo Consensus Panel that conducted the most in-depth investigation on September 11, 2001 ever made. Giulietto Chiesa appears there as one of the 23 experts and eight honorary members of that panel.[1]