Chrystia Freeland is a Canadian politician.[1] Matthew Ehret began a 2019 story about her by opining that she "has become a bit of a living parody of everything wrong with the detached technocratic neo-liberal order which has driven the world through 50 years of post-industrial decay."[2]

Chrystia Freeland is a prominent critic of Russia who was banned from the country in 2014. She happens also to be a friend of Victoria Nuland, and a passionate supporter of her coup in Ukraine.[3]

Freeland is co-chair of the Lima Group which is dedicated to the overthrow of Venezuela's President Nicolás Maduro.[4]

Freeland’s grandparents were Ukrainian and supported the Nazis[5] during World War II. Cameron Pike headlined about Freeland at The Saker, on 2 February 2019, "Canada’s Nazi Problem”[6] and opened:

"In the 1960’s the Polish government, still reeling from their role as the main course of the European ‘meat-sandwich’ that was the Second World War, went on the hunt for Nazi aiders and abettors who destroyed their people. Contrary to what mainstream readers are allowed to know, WWII Nazi and Waffen SS leaders, Goebbels’s publishers and editors (otherwise known as propagandists), willing and outright Nazi collaborators and vicious killers, made their way out of conquered Germany to the United States [under CIA direction] and to Canada, under MI6 direction, (and Canada) took in 2000 of them. Most of them ‘made their way’ to Ontario and Alberta. One of them even became the President of the University of Alberta. I repeat, one of them EVEN BECAME THE PRESIDENT OF THE UNIVERSITY OF ALBERTA. … It was this former Waffen SS soldier-turned University President who created the Ukrainian Studies department at the U of A. … Michael Chomiak, another of these significant Nazis who were never caught, lived out his days after the war as a farmer in Alberta. His Nazi identification documents were uncovered by the Polish Government in the 1960s.

“Chomiak’s records show he was trained in Vienna for German espionage and propaganda operations, then promoted to run the German press machine for the Galician region of Ukraine and Poland during the 4-year occupation. So high-ranking and active in the Nazi cause was Chomiak that the Polish intelligence services were actively hunting for Chomiak until the 1980s – without knowing he had fled for safety to an Alberta farm in Canada.”[7] 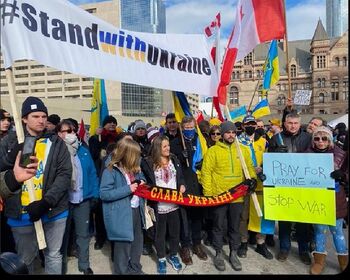 A picture that she deleted from a tweet in February 2022, changing it to another one (as noticed by people in the comments).[8] The colors of the scarf are associated with blood & soil.[9]

Poland was on the hunt but lost the trail because he was well hidden by their WWII ‘ally’, the British, unbeknownst to my fellow peaceful Canadians.

Freeland started her career doing anti-Russia reporting for the corporate press. She won awards for her puff pieces on the anti-Putin oligarch Mikhail Khodorkovsky. After years shaping Western news coverage inside the Ukraine and Russia, Freeland was promoted in 2010 to a very influential position: global editor-at-large of Reuters, the biggest international news agency, that is the source of most foreign policy stories for the entire mainstream media.[10]

The US State Department boasted in a declassified memo in March 2017 that Canada had adopted an “America first” foreign policy.

The cable was authored just weeks after the government of Prime Minister Justin Trudeau appointed Chrystia Freeland as foreign minister. The US State Department added that Trudeau had promoted Freeland “in large part because of her strong U.S. contacts,” and that her “number one priority” was working closely with Washington. “Trudeau then added to her responsibilities for U.S. affairs, giving her responsibility for U.S.-Canada trade, an unprecedented move in the Canadian context,” the State Department wrote.[11]

Michael Chomiak was Chrystia Freeland’s maternal grandfather.[12] Chrystia Freeland loves him very much and is unshakably loyal to his memory and to his far-right beliefs, which she proudly supports. She also is a close friend of George Soros, who likewise is entirely unembarrassed at, and unapologetic about, his having, as a supposed Christian child in Hungary, helped the Nazis take the property of other Jews, before they were sent off to the concentration camps. He chose to do that — help the Nazi regime — rather than die as a Jew himself. Of course, subsequently, he founded the rabidly anti-Russian Open Society Foundation and other political ‘charities’ to tax-exempt his global political donations. Soros, too, is a passionate supporter of the US coup in Ukraine and of Ukraine’s far-right, and helped to finance (tax-exempt via his International Renaissance Fund) Barack Obama’s Ukrainian coup by being one of the three top donors to Hromadske TV, which propagandised for slaughtering at least one and a half million of the people in the far eastern region of Ukraine, where Obama’s imposed far-right Ukrainian government was totally rejected.[13][14] It’s the region that had voted over 90% for the Ukrainian President whom Obama-Nuland overthrew, and George Soros was a top funder of such exterminationist propaganda. So, it’s reasonable that his fellow anti-Russian fanatic, Freeland, is a friend of his.