Nicolás Maduro (born 23 November 1962) is a Venezuelan politician who has been the President of Venezuela since his formal inauguration on 19 April 2013. Previously he served under President Hugo Chávez as Minister of Foreign Affairs from 2006 to 2013 and as Vice President of Venezuela from 2012 to 2013. After Chávez's death on 5 March 2013, Maduro assumed the powers and responsibilities of the president. A special election was held on 14 April 2013 to elect a new president, and Nicolas Maduro won with 50.62% of the votes as the candidate of the United Socialist Party of Venezuela (PSUV).[1] He was re-elected on 20 May 2018 and inaugurated as President on 10 January 2019 for a second six-year term.[2]

On 2 February 2019, President Maduro proposed bringing forward the 2020 Parliamentary Elections, seeking to crush the threat posed by the National Assembly’s unelected head, Juan Guaidó who, ten days earlier, had proclaimed himself interim President.[3] Maduro, in a speech to a mass rally of supporters, said the all-powerful government-controlled National Constituent Assembly would debate calling earlier elections for the National Assembly, which he denounced as “bourgeois”.[4]

A week before the National Constituent Assembly (NCA) elections took place on 30 July 2017, President Maduro accused the United States of plotting “regime change” in Caracas after CIA Director Mike Pompeo made a comment about discussing “transition” in Venezuela with regional partners.[5]

Following months of street protests and clashes in which more than 100 people had died and, despite the violence and an opposition boycott, more than 8 million people participated in the democratic process by casting their votes for the 545 NCA members, who will be empowered to draft a new constitution.

Ahead of the vote, the US Treasury had already slapped sanctions on 13 senior Venezuelan officials for allegedly “undermining democracy” with the initiative. According to Treasury Secretary Steven Mnuchin, the White House considers the elections held in Venezuela to be illegitimate and holds Maduro responsible:

“Yesterday’s illegitimate elections confirm that Maduro is a dictator who disregards the will of the Venezuelan people,” Mnuchin said in a statement. “By sanctioning Maduro, the United States makes clear our opposition to the policies of his regime and our support for the people of Venezuela who seek to return their country to a full and prosperous democracy.”

President Maduro promised to continue to protect his country, despite the newly announced sanctions. In a televised address to the nation, the president emphasised that he does not "take orders from the empire," telling his American counterpart, "Keep up your sanctions, Donald Trump!"

"I am proud of the alleged sanctions... because I do not wag my tail like a lying dog," Maduro said Monday after the Election Commission announced Sunday's voter's turnout. "I am punished for defending the natural resources of Venezuelan lands. I am the independent president of a free nation," he said, according to Globovision. "You're with Trump or Venezuela, you're with Trump or with democracy, you're with Trump or the free world."

President Maduro claimed victory in Sunday’s vote, but a number of countries, including the United Kingdom, the US and Argentina refused to recognise the election. Russia, however, praised the vote as laying the basis for a peaceful resolution of the contradictions plaguing Venezuelan society:

“We regret to note that opposition forces did not respond to the call to take part in the vote, but instead tried to hamper the elections, provoking clashes that have resulted in loss of life. We urge the opposing parties to stop the pointless violent confrontation.”[6]

On July 30th, Venezuelans will elect a people's body called the 'Constituent Assembly' comprised of hundreds of representatives across the country with the power to redraft the constitution.

US politicians, press and opposition in Venezuela are calling the process a "coup" that should be boycotted by all.

Abby Martin addresses the criticisms with Head of the Presidential Commission to oversee the Constituent Assembly process, Elias Jaua, speaks to supporters and participants of the Assembly, interviews historian Chris Gilbert and explains what is at stake in Venezuela if the social programmes instituted under Chávez are terminated by the opposition.[8]

“The United States condemns the actions of the Maduro dictatorship,” Trump said in a statement released hours after the Venezuelan government took opposition figures Leopoldo Lopez and Antonio Ledezma into custody. “Mr Lopez and Mr Ledezma are political prisoners being held illegally by the regime,” Trump said, adding that Washington would hold Mr Maduro “personally responsible for the health and safety of Mr Lopez, Mr Ledezma, and any others seized. We reiterate our call for the immediate and unconditional release of all political prisoners,” Trump said.[9]

Speaking for the first time at the Constituent Assembly on 10 August 2017, President Maduro invited the governments of Latin America to take part in a meeting of the Community of Latin American and Caribbean States, CELAC, in an effort to improve relations:

“To all the presidents, I call on them to approve a meeting and through mutual dialogue, we can find a solution," said Maduro. “Respect is the only path to peace, not threats or violence or the economic and commercial blockade."

Maduro also invited the United States to agree to "mutually respectful" dialogue, adding that he will be in New York in September for the United Nations General Assembly.

President Maduro's invitation follows an earlier plea for dialogue after a group of neighbouring countries took part in a meeting in Peru to discuss isolationist measures against the Venezuelan government. In the face of these threats, Maduro announced he would activate a national constituent process to strengthen the structure of the Bolivarian Armed Forces.

During the special session, the NCA ratified Nicolás Maduro as the President of Venezuela.[10]

Nicolás Maduro is, since September 2016, Secretary General of the Non-Aligned Movement, which has condemned the United States for its unilateral coercive measures against the Bolivarian Republic of Venezuela.[11]

If I know anything, it is about people, such as you, I am a man of the people. I was born and raised in a poor neighbourhood of Caracas. I forged myself in the heat of popular and union struggles in a Venezuela submerged in exclusion and inequality.

I am not a tycoon, I am a worker of reason and heart, today I have the great privilege of presiding over the new Venezuela, rooted in a model of inclusive development and social equality, which was forged by Commander Hugo Chávez since 1998 inspired by the Bolivarian legacy.

We live today a historical trance. There are days that will define the future of our countries between war and peace. Your national representatives of Washington want to bring to their borders the same hatred that they planted in Vietnam. They want to invade and intervene in Venezuela – they say, as they said then – in the name of democracy and freedom. But it’s not like that. The history of the usurpation of power in Venezuela is as false as the weapons of mass destruction in Iraq. It is a false case, but it can have dramatic consequences for our entire region.

Venezuela is a country that, by virtue of its 1999 Constitution, has broadly expanded the participatory and protagonist democracy of the people, and that is unprecedented today, as one of the countries with the largest number of electoral processes in its last 20 years. You might not like our ideology, or our appearance, but we exist and we are millions.

I address these words to the people of the United States of America to warn of the gravity and danger that intend some sectors in the White House to invade Venezuela with unpredictable consequences for my country and for the entire American region. President Donald Trump also intends to disturb noble dialogue initiatives promoted by Uruguay and Mexico with the support of CARICOM for a peaceful solution and dialogue in favour of Venezuela. We know that for the good of Venezuela we have to sit down and talk, because to refuse to dialogue is to choose strength as a way. Keep in mind the words of John F. Kennedy:

Are those who do not want to dialogue afraid of the truth?

The political intolerance towards the Venezuelan Bolivarian model and the desires for our immense oil resources, minerals and other great riches, has prompted an international coalition headed by the US government to commit the serious insanity of militarily attacking Venezuela under the false excuse of a non-existent humanitarian crisis.

The people of Venezuela have suffered painfully social wounds caused by a criminal commercial and financial blockade, which has been aggravated by the dispossession and robbery of our financial resources and assets in countries aligned with this demented onslaught.

And yet, thanks to a new system of social protection, of direct attention to the most vulnerable sectors, we proudly continue to be a country with a high human development index and low inequality in the Americas.

The American people must know that this complex multiform aggression is carried out with total impunity and in clear violation of the Charter of the United Nations, which expressly outlaws the threat or use of force, among other principles and purposes for the sake of peace and the friendly relations between Nations.

We want to continue being business partners of the people of the United States, as we have been throughout our history. Their politicians in Washington, on the other hand, are willing to send their sons and daughters to die in an absurd war, instead of respecting the sacred right of the Venezuelan people to self-determination and safeguarding their sovereignty.

Like you, people of the United States, we Venezuelans are patriots. And we shall defend our homeland with all the pieces of our soul.

We appeal to the good soul of American society, victim of its own leaders, to join our call for peace, let us be all one people against warmongering and war.

Long live the peoples of America!

President of the Bolivarian Republic of Venezuela[12] 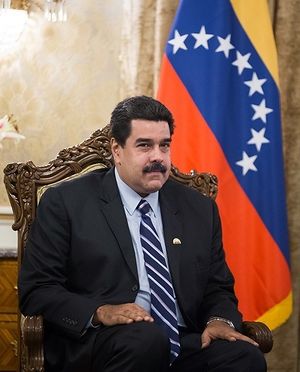