From Wikispooks
< Nord Stream
Jump to navigation Jump to search

The Nord Stream 1 and 2 pipelines were sabotaged by large explosions on the 26 September 2022. These happened in an area that the USS Kearsarge was crossing shortly before and in which US military helicopters had been circling in early September.[1][2][3] The Polish navy in 2021 had interfered and endangered the pipe laying vessels in the same location.[4] 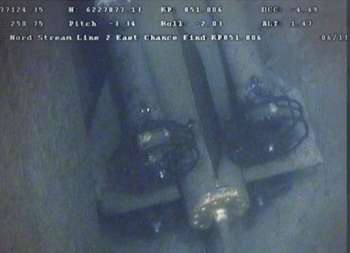 A spokesperson for Gazprom said on 10 October 2022 that the underwater drone (used as a mine destroyer) discovered in 2015 near the Nord Stream 1 pipeline, belonged to NATO.[5][6][7]

Beginning around 2010 the EU began to push a radical change in rules for pricing natural gas. Prior to that point most gas prices were set in fixed long-term contracts for pipeline delivery. The largest supplier, Russia’s Gazprom, provided gas to the EU, most especially to Germany, in long-term contracts pegged to the price of oil. Until the last several years almost no gas was imported by LNG ships. With a change in US laws to allow export of LNG from the huge shale gas production in 2016 US gas producers began a major expansion of LNG export terminal construction. The terminals take an average of 3 to 5 years to build. At the same time Poland, the Netherlands and other EU countries began to build LNG import terminals to receive the LNG from abroad.[8]

In November 2015, the Swedish Armed Forces cleared a "munitions object" found in close proximity to the Nord Stream 1 pipeline (line 2). The location of the object was in the Swedish Exclusive Economic Zone (EEZ) approximately 120 km away from the island of Gotland.[9] 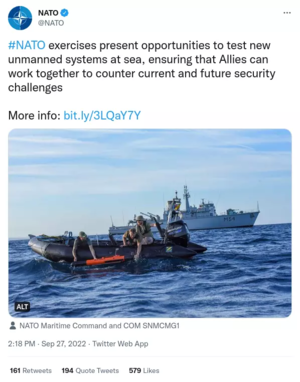 National Review, on 22nd February 2022, published an article by Jim Geraghty with the headline: "Nice New Pipeline You’ve Got There. Shame If Something Happened to It". The article concludes with:

“A lot of Germans are invested — politically and economically — in closer ties with Russia, and may be eager to restore the previous status quo as soon as it is politically palatable. Of course, if something happened to make the Nord Stream 2 pipeline unusable, it is a different story. Hey, what is Andreas Malm doing these days? Where are those eco-radicals when we really need them?”
Jim Geraghty (22 February 2022)  [10]

According to reports that were made public shortly thereafter, the NYT writes: "The C.I.A. issued a vague warning in June to a number of European nations, including Germany, that the two Nord Stream gas pipelines that carry natural gas from Russia could be targeted in forthcoming attacks,".[11][12]

In June 2022, the U.S. Navy held an exercise off the coast of Bornholm, Denmark. In support of the BALTOPS exercise, the U.S. Navy 6th Fleet partnered with U.S. Navy research and warfare centers to bring the latest advancements in unmanned underwater vehicle mine hunting technology to the Baltic Sea to demonstrate the vehicle’s effectiveness in operational scenarios. Experimentation was conducted , with participants from Naval Information Warfare Center Pacific, Naval Undersea Warfare Center Newport, and Mine Warfare Readiness and Effectiveness Measuring all under the direction of U.S. 6th Fleet Task Force 68.[13][14] This exercise may have provided enough disturbance and sound cover to approach the pipeline undetected - the Baltic sea being constantly monitored [15] "enabled by a broad array of national platforms, including coastal radars, maritime patrol aircraft (both manned and unmanned), surface warships with their air defense radars and sonar arrays, submarines, acoustic and magnetic anomaly sensors, and coastal patrol craft".[16] 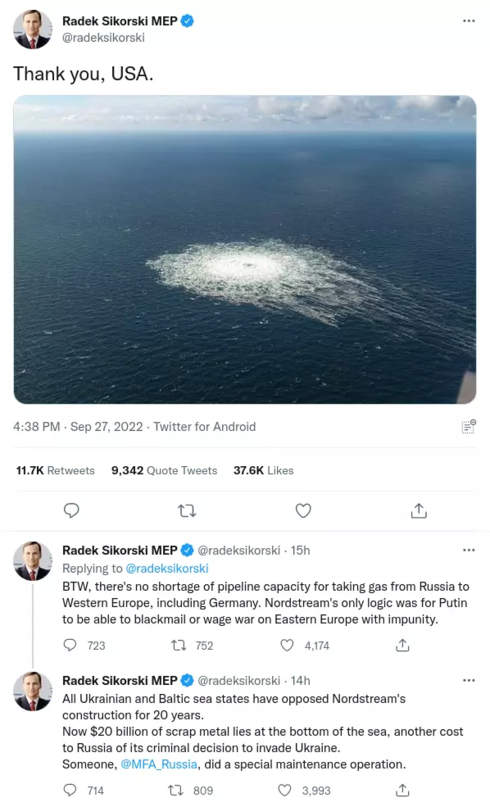 A tweet by Polish politician Radosław Sikorski, thanking the United States right away. He later deletes the tweet [17] and gets accused to have served Russian propaganda with it.[18]

Russian media warned of a military threat to the pipelines in April 2021, after a significant number of civilian ships and warships (mostly Polish), as well as submarines, made dangerous maneuvers around the pipeline construction vessel Fortuna. Polish military aircraft flew around and over the construction site.[19]

Alex Christoforou points out that usually there is an understanding among great powers, that if one were to blow up the other one's infrastructure, it would inevitably draw in a response.[20] So as to not end up in a situation where everything gets destroyed, certain things were in the past agreed to be off-limits. But since the US is not a coherent government anymore in his argument, US state officials are now giving statements that are not unified, which leads him to believe that this was not coordinated with every branch that would otherwise be involved in the decision process; the decision process that would lead to the final order to use covert action.

Alexander Mercouris says that after a while (following investigation) it will be blamed on Russia, but he sees no reason why they should have caused the damage, since Russia could have just cut the gas-flow (which they did in the past) and are now missing this instrument for leverage in negotiations.[21]

“The military operation on Monday night which fired munitions to blow holes in the Nord Stream I and Nord Stream II pipelines on the Baltic Sea floor, near Bornholm Island, was executed by the Polish Navy and special forces.

It was aided by the Danish and Swedish military; planned and coordinated with US intelligence and technical support; and approved by the Polish Prime Minister Mateusz Morawiecki.

The operation is a repeat of the Bornholm Bash operation of April 2021, which attempted to sabotage Russian vessels laying the gas pipes, but ended in ignominious retreat by the Polish forces. That was a direct attack on Russia. This time the attack is targeting the Germans, especially the business and union lobby and the East German voters, with a scheme to blame Moscow for the troubles they already have — and their troubles to come with winter.

Morawiecki is bluffing. “It is a very strange coincidence,” he has announced, “that on the same day that the Baltic Gas Pipeline opens, someone is most likely committing an act of sabotage. This shows what means the Russians can resort to in order to destabilize Europe. They are to blame for the very high gas prices”. The truth bubbling up from the seabed at Bornholm is the opposite of what Morawiecki says.”
John Helmer (27 September 2022)  [22]

Another pipeline from Norway to Poland, the Baltic Pipe, had a ceremony to mark the opening the next day.[23][24]

Pepe Escobar reports that his sources tell him that there were secret negotiations to solve the issue of deliveries between Germany and Russia. Escobar also points to a remark by Dmitry Peskov, who in his choice of words was hinting at this.[25][26]

The German think tank German-Foreign-Policy while not mentioning "secret negotiations", mentions to the so-called Japan-solution, in which Japan takes part in the US sanctions regime, but excludes the natural gas sector from that completely. They also point out that there was push back within the governing coalition against the blocking of North Stream 2 (besides the AFD, most notably Wolfgang Kubicki (FDP) wanted to get NS2 opened), and popular protest was forming on the streets of Germany.[27]

On 28th September, the German Bild publishes an article with the headline: "Western Security Agencies Suspect - Putin had Nord Stream mined during construction" (the paper historically publishing what special interests wants society to believe, or be concerned with).[28]

On 30th September, U.S. Secretary of State Antony Blinken said that the incident: "offers tremendous strategic opportunity for the years to come" [29][30] - while on his first visit in office to Europe at the beginning of 2021, he called for the Nord Stream 2 project to be stopped.[31]

“There is a party or a party that, in the absence of the functioning of these gas pipelines, is able to sell more LNG at a higher price. This side is well known, it is the United States, [...] there are also countries that have the military-technological capabilities to carry out such sabotage”
Dmitry Peskov (03 October 2022)  [32]

Thierry Meyssan writes that Poland and its Central European allies, members of the Three Seas Initiative (modeled on the Intermarium concept) will now take the economic lead at the expense of western Europe (France, Netherlands, Germany).[34]

Denmark and Sweden will not cooperate with Germany, the most affected state, in it's investigation.[35] German press finds interview partners that say Russia possibly had mined it's pipelines itself during construction.[36] All investigative findings are under strictest secrecy.[37]

At the same time as the sabotage, there circulated an alleged leaked research report from the deep state think tank Rand, outlying a US strategy to weaken Germany.[38] From the language used, the report is an obvious forgery, and may well have been circulated in an attempt to discredit independent media not doing sufficient due diligence. Rand issued press release stating it was a fake document.[39]

In late October 2022, the Russian Defence Ministry accused the British Navy to have been involved in the sabotage of the pipelines;[40] which the UK Ministry of Defence denied the same day.[41]

“To be honest, I don’t care who got this information and how. I’m interested in London’s answer to the following question: Did Prime Minister Liz Truss of Britain send a message to US Secretary of State Antony Blinken immediately after the Nord Stream gas pipeline was blown up with the words ‘It’s done’?”

Maria Zakharova suggested that “millions of people around the world” were waiting for answers concerning the Nord Stream sabotage, “and what role the Anglo-Saxons played in this terrorist attack.”

Zhakarova’s Telegram post comes amidst claims that Truss allegedly sent the text to Blinken through her unsecured iPhone, prompting internet figure Kim Dotcom to tweet “iCloud admin access rocks,” adding “it’s not just the Five Eyes that have backdoor admin access to all Big Tech database,” although not elaborating what he knows of the matter.

Various press, including the British edition of the Daily Mail, also said that Truss’s phone was hacked and the exchange with Blinken leaked. Other analysts have connected the event to UK Defence Secretary Ben Wallace’s sudden and unannounced visit to the United States, citing a Telegraph article that claims a defence source said the in-person meeting was related to compromised communication systems between the UK and US.

Whatever the veracity of these claims may or may not be, President Putin’s spokesman, Dmitry Peskov, said that Russian intelligence agents are in possession of data indicating British military specialists “were directing and coordinating the attack,” according to various press, including Anadolu and AFP.[42]

On 27 September 2022, Gonzalo Lira blamed the US government for sabotaging the pipelines,[43] echoing a NATO general who said:

"Our purpose is to keep the Russians out, keep the Americans in, and keep the Germans down”.[44]

"The Nord Stream blasts were an act of international vandalism on an almost unimaginable scale, overshadowing even 9/11. And yet the media response has been decidedly muted, apart from some barely credible finger-pointing at Russia."[46]

In resulting discussions in the aftermath the question was raised if divers could operate in the turbulent waters of the Baltic Sea, a German website with a focus on explosive demolition writes:[47]

The damage is located in a water depth of about 70 meters. Professional and combat divers can also work at such depths in the Baltic Sea to place the previously discussed cutting charges or, even simpler, concentrated explosive charges in the form of mines.