William Barr is a US Deep state lawyer who served as the 77th and 85th United States Attorney General in the administrations of Presidents George H. W. Bush and Donald Trump.

At a press conference on 21 December 2020, the 32nd anniversary of the downing of Pan Am Flight 103, and just before his second stint as US Attorney General came to an end, William Barr announced criminal charges against an alleged bombmaker Mohammed Abouagela Masud in relation to the Lockerbie bombing.[2] Back in November 1991, early in his first tenure at the US Justice Department under President George H.W. Bush, William Barr had indicted two Libyan intelligence-linked men, Abdelbaset al-Megrahi and Lamin Khalifah Fhimah, whom the US accused of conspiring to place explosives in a portable radio/cassette player that was inside a suitcase on the aircraft. Barr explained:

"The investigation also pointed to a third conspirator, a man known by the name of Abu Agila Mas'ud Kheir Al-Marimi, who at the time, investigators were unable to identify or locate this third person."

Prosecutors referred to the alleged bombmaker as "Masud" in court documents. He is currently in custody in Libya, prosecutors said. But, unlike the extraditions of Megrahi and Fhimah over 20 years ago for trial in the Netherlands, US authorities now expect to extradite Masud to stand trial in the USA.[3] 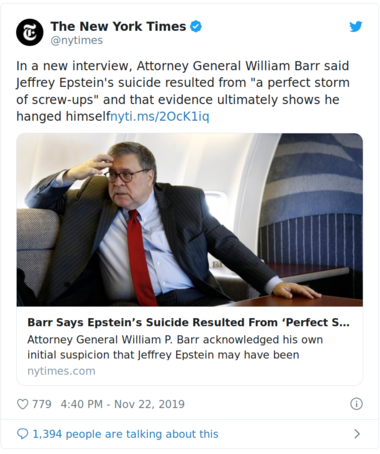 William Barr was US Attorney General at the time of the Epstein affair. Barr's father, Donald Barr, was headmaster at the elite Dalton School from 1964 to 1974. During his time as Dalton's headmaster, Barr hired Epstein as a math teacher despite the fact that Epstein had failed to complete his degree and was only 21 years old at the time. In 1973, Barr published Space Relations, a science fiction novel about a planet ruled by oligarchs who engage in child sex slavery.[4]

William Barr ordered the prison governor, Lamine N'Diaye, be reassigned to a desk post at the Bureau of Prisons' regional office in Pennsylvania. However, it was revealed in January 2020 that he was instead assigned to a "top job" at FCI Fort Dix, a low-security prison in Burlington County, New Jersey.[5]