YouTube Censorship has accelerated since the "Fake News" meme was launched in 2016, and again during the COVID-19/Pandemic, pushing a lot of people on to alternatives such as AltCensored or Bitchute.

April 2021: In the drive to censor "medical misinformation, in this case from virologist Prof. Sucharit Bhakdi[1], YouTube now gives no results and a blank screen apart from government sites 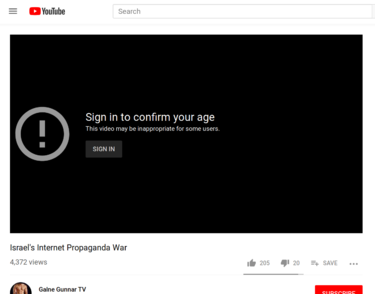 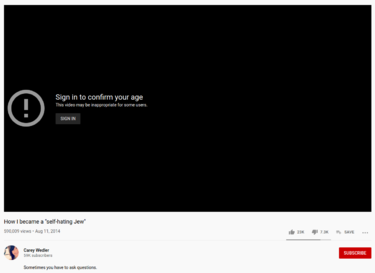 It appears that what would otherwise may be called legitimate political critique has a greater chance getting censored via sign in requirement when it comes to the Zionist state of Israel.

After his channel was deleted in 2018, Sayed Hasan charged that "Youtube strives to hide its censorship behind a pseudo-legalistic procedure." [2] Soft censorship tactics include labelling content as age inappropriate, i.e. requiring users to sign in before viewing it and selective enforcement of its rules.

YouTube ramped up Censorship during the COVID-19/Pandemic, removing videos that had been seen by millions of viewers. YouTube CEO Susan Wojcicki announced in 2020 that it would censor any opinions about COVID-19 that dissented from WHO guidelines.[14] 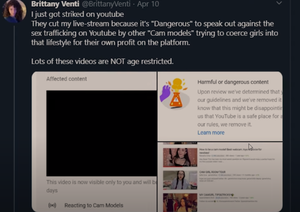 Prompted by the removal of a video he had posted about the 2017 Las Vegas shooting, Mike Adams reported in December 2017 on "the worsening pattern of censorship of political speech by YouTube."[39] Other commentators from Las Vegas noticed that private video footage from the shooting was widely taken off from the platform at some point.[citation needed]

The comment sections of political or government critical videos of some channels received a huge uptick in Spam comments since around mid 2015.[45] Channels like Truthstream Media, who experienced manipulation of their view counts since around the same time,[46] had on very successful videos which generated tens of thousands of views in the first weeks an assessable number of comments. It was easily feasible for the onlooker to read through the discussion and get an overview about the opinions that get exchanged. The comment section of this channel and others got flooded noticeable at one point, drowning any sensible discussion with several hundreds of annoying and useless statements and replies. This could at the one hand of course mean, that more people choose to leave senseless replies, but also, that as part of cyberwar the military and contractors have decided to degrade the communication therein.

In 2018 Mike Adams registered youtubecensorship.com to begin reporting on it and created the new video hosting platform Brighteon.[47] Reclaimthenet also has a focus on Youtube censorship. The browser plugin TubeShift allows for searching of deleted videos on other video platforms.[48]