From Wikispooks
< Facebook
Jump to navigation Jump to search

Facebook is censored (as are Google, YouTube and Twitter), not only on grounds of copyright or indecency, but because certain ideas are deemed as unwelcome on the network. For example, posting about false flag attacks.[1] 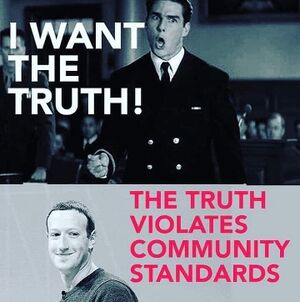 Open censorship of Facebook (and other social media) reached a new high during the COVID-19 pandemic.[2]

The Intercept revealed in December 2017 that Facebook has been deleting accounts on behalf of the US and Israeli governments.[3] The Grayzone reported in December 2019 that Ben Nimmo and the DFRLab prompted Facebook (and Twitter) to delete hundreds of accounts.[4]

Censorship on Facebook combines thousands of human modifiers with software that automatically flags up content based on content (e.g. keywords) and/or user behaviour (e.g. many shares in a short space of time, users flagging it themselves).

Since late 2016, the phrase "fake news" has been used to try to justify censorship of material. Facebook began [When?] to use Snopes for "fact checking" but Shopes terminated this collaboration on February 1, 2019.[5]

It is unclear to what extent Facebook hides users' posts from one another. What is clear is that:

Educate Yourself reported that "Facebook will remove any article identified as coming from educate-yourself.org"[6]

In March 2019 Facebook banned Zero Hedge.[7] OffGuardian reported in June 2019 that Facebook was censoring links to their site.[8]

Similarly to other commercially-controlled media, the deep state is able to remove content from Facebook. Certain topics seem to be prohibited:

In 2017 Facebook banned Caitlin Johnstone for 3 days for posting an article about false flag attacks. As a result, she posted a piece entitled I've Been Banned From Facebook for Sharing an Article About False Flags.

Craig Murray reported on 23 Jan 2018 in an article entitled Zionist Censorship on Facebook that "Facebook has just announced that it is employing 10,000 more people to be directly engaged in censorship – ostensibly to weed out “fake news”, which evidently includes disagreement with Israel."[9] On 26 April 2018, Murray added:

"This site’s visitor numbers are currently around one third normal levels, stuck at around 20,000 unique visitors per day. The cause is not hard to find. Normally over half of our visitors arrive via Facebook. These last few days, virtually nothing has come from Facebook.

"What is especially pernicious is that Facebook deliberately imposes this censorship in a secretive way. The primary mechanism when a block is imposed by Facebook is that my posts to Facebook are simply not sent into the timelines of the large majority of people who are friends or who follow. I am left to believe the post has been shared with them, but in fact it has only been shown to a tiny number. Then, if you are one of the few recipients and do see the post and share it, it will show to you on your timeline as shared, but in fact the vast majority of your own friends will also not receive it. Facebook is not doing what it is telling you it is doing – it shows you it is shared – and Facebook is deliberately concealing that fact from you."[10]

In May 2019, Facebook censored Louis Farrakhan, a supporter of the theory that Israelis played a key role in 9/11, stating that "We’ve always banned individuals or organizations that promote or engage in violence and hate, regardless of ideology."[11]

Facebook’s vice-president for Northern Europe, Steve Hatch, said the company was “determined” to ensure users “can access credible and accurate information”. Pointing to the way searches of relevant material on Facebook and Instagram trigger pop-up information from the NHS, he added: “We’re also removing false claims and conspiracy theories which have been flagged by leading health organisations and that could cause harm to people who believe them.”[citation needed]

In 2015, the EFF reported that in the South Carolina prison system, accessing Facebook is an offense on par with murder, rape, rioting, escape and hostage-taking, with one inmate receiving more than 37 years in isolation for the 'offence'.[12]