Press TV is an Iranian state-owned news and documentary network that broadcasts in the English and French languages. Since its modern, well-presented shows often give news from a different angle than Western corporate media, it has found itself sanctioned,threatened and banned on several occasions. 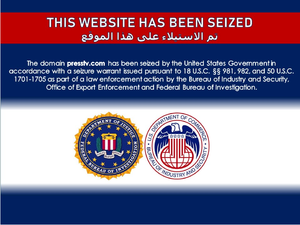 In June 2021, the United States government seized the domain name Presstv.com. The channel is still available at http://www.presstv.ir/

Press TV's mission is to offer a different point of view on world events, to free the global mass media market from the dominance of Western opinion; overcome cultural differences; and highlight the universality and vitality of political and cultural differences. The TV channel declares that it is not dependent on any commercial or government structure. Press TV seeks to compete, in particular, with Al Jazeera English, France 24 and Russia Today.[1]

Serena Shim (1985-2014) was an American journalist working for Press TV. Reporting from the Turkish-Syrian border, she reported about fighters from ISIS crossing from Turkey into Syria, disguised in trucks carrying the symbols of NGOs and the World Food Programme. Serena told her employers that she was threatened by Turkish intelligence and accused of espionage. Two days later, she was suddenly killed in a suspicious car accident in October 2014, the circumstances of which have remained murky since that time. When she was threatened by the Turkish intelligence, she continued to report despite her well-founded fears, and "paid the ultimate price for her uncompromised integrity in journalism".[2]

The Serena Shim Award for independent journalism, unrelated to Press TV, is named in her honor.

Ramin Mazaheri is the chief correspondent in Paris for PressTV and has lived in France since 2009. A declared communist, he regularly writes columns for alternative media, like The Saker[3] and the Greanville Post. He has covered the Yellow Vests protests extensively. 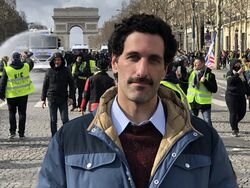 Banned and Deplatformed in the UK

The British government (via its media regulator Ofcom) has decided that the UK public should be prevented from hearing what Press TV had to say. [4][5] The British government gave PressTV large fines several times over the years, and on 20 January 2012, Press TV's licence to broadcast in the UK was revoked by Ofcom with immediate effect.

On April 3, 2012, Munich-based media regulator Bayerische Landeszentrale für neue Medien (BLM), announced it was removing Press TV from the SES Astra satellite, as they did not have a licence to broadcast in Europe[6].

In July 2013 Press TV and other Iranian channels were removed from several European and American satellites (amongst others those of Eutelsat and Intelsat), allegedly because of the Iran sanctions, even though an EU spokesperson told the channel that these sanctions do not apply to media. In November 2012, the Hong Kong-based AsiaSat (owned by the Carlyle Group) took Iranian channels off air in East Asia, and in October 2012 Eutelsat and Intelsat stopped broadcasting several Iranian satellite channels, though the Islamic Republic of Iran Broadcasting managed to resume broadcasts after striking deals with smaller companies that are based in other countries.

Since the United States government currently leads trade and economic sanctions against Iran, and does not allow Iranian journalists into the country, Press TV's only official presence in the United States was their representation at the United Nations.

Youtube has deleted several of Press TV's channels over the years.[7][8] Google blocked Press TV access to their Gmail and YouTube in April 2019; although the latter remained active no new content could be added. YouTube removed Press TV UK from its platform in January 2020. In April 2019, Press TV reported that Google blocked their access (along with HispanTV) “without prior notice, citing “violation of policies,” and that they received a message saying “your Google Account was disabled and can’t be restored because it was used in a way that violates Google’s policies.” Although their YouTube channels remain open, no new content can be published.

According to the CIA front group NewsGuard, PressTV often presents disinformation and unverified information (without sources or evidence), notably from Russian media (Sputnik) or RT or coming from sites (French in particular) which have contributed to spreading conspiracy theories[9].

Domain name seized by US government

On June 22, 2021, the United States Department of Justice "seized 33 websites...in violation of U.S. sanctions." All of them were Shia-muslim websites, some of them Iranian, and included the domain name Presstv.com. The US government stated that PressTV was "disguised as news organization" and "targeted the United States with disinformation campaigns and malign influence operations".[10]