Dissident opinions about COVID-19 are being heavily censored, particularly online. The examples here are only the tip of a truly vast iceberg of censorship.

Several aspects of COVID-19 were third rail topics. The zoonotic origin of the virus was more almost uniformly pushed by commercially-controlled media, although minimal evidence was ever actually presented.

Covid-19 was known in early 2020 to respond well to treatment by various readily available drugs including hydroxychloroquine (as mentioned by Donald Trump) and ivermectin (both on the WHO's list of essential medicines). This information was still being energetically suppressed as of June 2021. One motive for this might be that the Covid injections in many jurisdictions, lacking proof of safety, have been authorised under emergency statutes which would be invalidated if the disease were responsive to established treatments,

A lot of commercially-controlled media coverage of Covid-19 has centered on dramatic images and questionable statistics, promoting a Covid panic. Sober narrations by doctors about how they have treated the disease and their observations about its being comparable to influenza have been unwelcome on corporate media and often removed on grounds of "misinformation". Facebook was exposed in May 2021 as having a project designed to reduce "vaccine hesitancy" which included shadow banning people's reports of their experience of getting a jab.

“If one of the first thoughts that goes through the head of a lab director at the Wuhan Institute of Virology is that the new coronavirus could have come from her lab, then we are obliged to entertain the scientific possibility that it could indeed have come from her lab. Right then, there should have been a comprehensive, pockets-inside-out, fully public investigation of the Virology Institute, along with the other important virus labs in Wuhan, including the one close by the seafood market, headquarters of the Wuhan CDC. There should have been interviews with scientists, interviews with biosafety teams, close parsings of laboratory notebooks, freezer and plumbing and decontamination systems checks — everything. It didn’t happen. The Wuhan Institute of Virology closed down its databases of viral genomes, and the Chinese Ministry of Education sent out a directive: “Any paper that traces the origin of the virus must be strictly and tightly managed.””
Nicholson Baker (4 January 2021)  [2]

Email revealed in late 2020 that Peter Daszak had anonymously organised a group of "experts" to promote the lone bat (i.e. zoonotic jump) theory about the origins of Covid. Any forms of dissent from this were liable to summary removal from commercially-controlled media. Many scientists self-censored, after sensing the academic climate, other had trouble finding publishers for their research. Scientists such as Fang Chi-Tai who had proposed alternatives publicly recanted.[3] This changed very suddenly in May 2021.

One of the first victims of censorship about COVID-19 was the Chinese doctor/whistleblower who alerted the world to it by posting on social media. He was disciplined by the Chinese government, and reportedly died of COVID-19, aged 31.[citation needed] (Although there are doubts if this version of events is correct[citation needed]).

Internet censorship was discussed in the October 2019 Event 201, for example as a response to claims that the virus might have been created by big pharma.[4] The most efficient strategy to win the information battle was to drown out other voices, by "developing the ability to flood media with fast, accurate, and consistent information", as even large parts of the world's top medical expertise discovered when they tried to protest or voice their opinion.

The main method chosen to silence dissent, as discussed in Event 201, has been to "flood the information landscape", where official information by sheer massive repetition and messaging from different channels and angles crowd out dissenting information. When other opinions once in a while are acknowledged, it is to dismiss them out of hand, for then going back to endlessly repeating the official message. 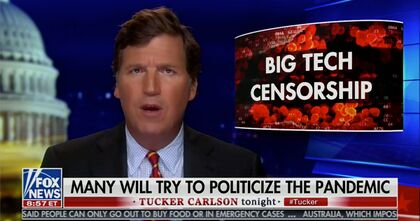 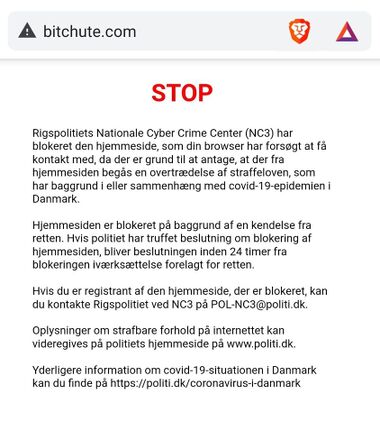 In 2021 Danish police turned of access to BitChute, because of one video they deemed "misinformtion" about Covid

After an interview in which David Icke claimed that there "is a link between 5G and this health crisis", Youtube announced that it would remove any posts that suggested the two topics were linked.[5] This was the thin edge of the wedge. The corporation also declared it would remove any posts which contravened WHO guidelines: "YouTube has clear policies prohibiting any content that disputes the existence and transmission of Covid-19 as described by the WHO and the NHS."[6]

In April 2020, YouTube deleted a press briefing by two doctors on Covid-19 which had 5 million views,[7][8] and has also removed other health experts when their declarations are against official policy[9][10].

The 2016 documentary TrustWHO („Trust who?“) by ARTE, which deals with the dubious role of the WHO in the context of „swine flu“, was deleted by Vimeo in April, 2020. It found "overlap" between the Bill & Melinda Gates Foundation and WHO. The film is available elsewhere.[11][12][13]

In April 2020, Facebook announced began informing users globally who have liked, commented on, or shared “harmful” misinformation about the coronavirus, pointing them instead in the direction of an official source.[14]

In December 2020. Facebook announced that it will enforce a stricter level of censorship related to coronavirus and vaccinations, removing content that supposedly includes false claims and "conspiracy theories" about COVID-19 vaccines that have supposedly been debunked by the platform’s "health experts".[15]

Google prohibits ads from running against "content that makes harmful claims about disease prevention and unsubstantiated cures", including anti-vaccine promotions or content that encourages users to forgo treatment.

From August 2020, the corporation is banning ads against content that make "claims going against authoritative scientific consensus." Banned claims would include theories like vaccines being attempts to genetically modify the population, that Bill Gates created Covid-19 or that the disease was a bioweapon made in a Chinese lab. Interestingly "authoritative scientific consensus" would mean that scientists, no matter how qualified, that states other things than the consensus, will be censored.[16]

From March 2020, Twitter, "in close consultation with local, national and global public health authorities around the world", banned tweets about "the nature of the virus", "the efficacy and/or safety of preventative measures, treatments, or other precautions", "official regulations and restrictions"[17]; and "the prevalence or risk of infection or death."

Starting in December 2020, the corporation will also remove all posts that suggest there are any “adverse impacts or effects of receiving vaccinations,” or “invoke a deliberate conspiracy” or “advance harmful, false, or misleading narratives” about vaccines, and "false claims that COVID-19 is not real or not serious, and therefore that vaccinations are unnecessary."[18]

The BBC has uncritically promoted the COVID-19/Vaccine, and not covered anti lockdown protests or vaccine deaths.

CBC - "How to (tactfully) discourage spread of false pandemic information"

Un Secretary General António Guterres announced in May 2020 that the COVID-19 Pandemic had unleashed a "tsunami of hate and xenophobia, scapegoating and scare-mongering”, and appealed for an all-out effort “to end hate speech globally." He reportedly "called on the media, especially social media, to remove racist, misogynist and other harmful content."[20] 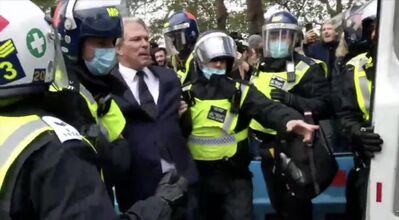 In December 2020, the Italian Order of Doctors has launched an investigation into at least 13 doctors accused of either denying the existence of Covid-19 or promoting anti-vaccination theories. The order said the doctors had misled, confused and misinformed patients. 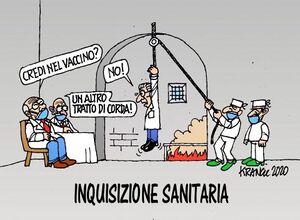 Italian doctors were forced to recant by the Health Inquisition. "Do you believe in the vaccine?" "No!" "Stretch the rope some more!"

Antonio Magi stated: “It is not a witch-hunt, but I have the ethical obligation to sanction those who declare falsehoods. Anyone who gives incorrect information to the population must be punished. There is a code of ethics to follow. And we have a civic and moral duty to vaccinate.”[23]

On the 24. December 2020, Prime Minister Jean Castex changed the public health code. The new code prohibits doctors from expressing opinions deviating from the line of the official Order of Physicians, "and refrains from presenting as acquired data assumptions that have not yet been confirmed".[24]

In November 2020, GCHQ was ordered "to wage cyber war on anti-vaccine propaganda" (information a priori defined as false) and to "to take out antivaxers online and on social media". The the focus of the high priority covert operation is taking down hostile "state-linked" content and disrupting the communications of the cyberactors responsible.[25] Keir Starmer, the leader of the Labour Party 'opposition', said "he was prepared to work with the government to pass emergency legislation to deal with the anti-vax campaigns".[26]

As with the events of September 11,[27] dissent from the official narrative has been used as grounds for imprisonment on grounds of "mental health"

In December 2020, Jean-Bernard Fourtillan, a French retired university professor in pharmacology and toxiology, and known for his strong opposition to COVID-19 vaccines, was taken from his temporary home in the south of France by a team of gendarmes (police) and forcibly placed in solitary confinement at the psychiatric hospital of Uzès.[29]

In particular, Fourtillan has accused the French Institut Pasteur, a private non-profit foundation that specializes in biology, micro-organisms, contagious diseases, and vaccination, of having “fabricated” the SARS-COV-2 virus over several decades and been a party to its “escape” from the Wuhan P4 lab — unbeknownst to the lab’s Chinese authorities — which was built following an agreement between France and China signed in 2004.

“He Craig Kelly needs to decide what is the appropriate thing for a member of Parliament to be commenting on.”
Paul Kelly (January 2021)  [30]

American State Representative from Michigan Karen Whitsett was censured by Gretchen Whitmer after speaking out about be treated with hydroxychloroquine.[31]