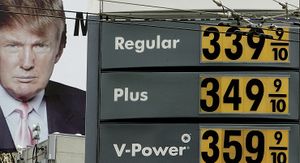 ★ Start a Discussion about this document
Is Oil Behind Washington’s Venezuela Coup Madness?

On 23 January 2019 US Vice President Mike Pence sent a message via Twitter that Washington recognised the 35-year-old Speaker of the Venezuela National Assembly, Juan Guaidó, as the “legitimate” President of the troubled country, and not elected President Maduro. The fact that it was first Pence and not the US President, who seemed forced to play catch-up, says much about the intervention. The question is whether oil was the reason as neo-con Security Council adviser John Bolton claimed or something else. The evidence suggests something else, but what something?

The Washington “recognition” of Guaido as “legitimate” president of Venezuela is not only a blatant breach of international law. It goes back on Donald Trump’s repeated campaign promises to stop US meddling in internal affairs of other countries. The attempted coup is being run on the ground by the same criminal operators, call them the deep state, who were behind the regime change operations of repeated US Colour Revolutions from Ukraine to Libya, including CANVAS and the CIA’s surrogate, National Endowment for Democracy. Many are asking why, after twenty years of Chavez and Maduro versions of central socialist economics, just now Washington makes such a brazen and dangerous step. One explanation is oil, but if so, not in a simple sense some may think.

In an interview on Fox News following US claims that Guaido was the legitimate interim president, John Bolton declared that, aside from declaring Maduro was “authoritarian” as reason for the Washington move, oil was a major factor. Bolton told Fox News:

“We’re looking at the oil assets…We’re in conversation with major American companies now.”

Then he made this bizarre remark, all the more as the US today claims to be world number one oil producer:

“It will make a big difference to the United States economically if we could have American oil companies really invest in and produce the oil capabilities in Venezuela.”

How that would “make America great again,” he did not say.

It’s true that, officially, Venezuela claims to hold the world’s largest oil reserves, estimated 297 billion barrels as of 2010, larger even than that claimed by Saudi Arabia. That makes an impressive headline but is misleading.

Aside from the fact that the Washington soft coup is hardly the urgent priority of the United States today, nor of the US President, the claims that it is about oil are overblown, clearly a deception on the part of John Bolton and others, unless it is part of a grand scheme to force world oil prices again to over $100 a barrel. Having Valero Energy or Chevron refine the Venezuela oil on US Gulf Coast refineries, contrary to what the pro-coup Senator Marco Rubio claims, will not be a major job source for the US. Oil refining is a highly automated industry with very small labour input.

But a closer look at the figures for Venezuela oil reserves is also necessary. Most of the oil resources of Venezuela are located in what used to be known as the Orinoco Belt, today the Hugo Chavez Belt. In the 1990s the “proven reserves” of Venezuela was estimated to be 60 billion barrels, a mere 20% of today’s estimate. Since Chavez took over in 1999 did Venezuela discover huge new deposits of oil? No. It discovered the changing economics of the rising world oil prices over the period from 1999 to 2014. Like Canada’s heavy Athabasca Tar Sands, Venezuela heavy Orinoco crude was suddenly economic, that is so long as world oil prices stayed above $100 a barrel.

We have to look at the definition of proven reserves. The U.S. Securities and Exchange Commission has defined it as “those quantities of oil and gas, which, by analysis of geoscience and engineering data, can be estimated with reasonable certainty to be economically producible…” When oil prices in the 1990s were well below $40 a barrel, it was not economically possible to produce Venezuela oil from the huge Orinoco region. The oil is a heavy tar-like grade similar to Canada’s Athabasca Tar Sands. So that vast reserve of tar oil, unconventional oil, was not economically producible, that is, not any more “proven reserves” by the standard definition. It takes much energy input to refine a barrel of Orinoco heavy oil. It must be processed in special refineries. The technology needed to recover ultra-heavy crude oil of the Orinoco Belt, is much more complex and expensive than Saudi or Russian or even US shale oil.

When world oil prices crashed in 2014 to below $30 a barrel, Venezuela should have adjusted the reserves dramatically down. It did not. It neglected to reduce “economically recoverable reserves.”

Today’s price for West Texas Intermediate oil hovers around $55 a barrel. Moreover, US sanctions have severely reduced Venezuela conventional oil production, most of which, 500,000 barrels daily go to the US.

Now new US sanctions target the nationalised state oil company, PDVSA. American companies are banned from doing business with PDVSA. American sanctions also dictate that any revenues from oil sales be put into an escrow to be managed by the “government” of Juan Guaidó, a move likely to lead to Maduro’s simply stopping those US exports, pushing US gasoline prices high.

Moreover, because the Venezuela oil is extremely heavy, it must be diluted by special diluent chemicals. Those diluents or thinning agents are essential to be able to move the heavy molasses-like oil via pipeline. PDVSA purchased until this week all diluents from US suppliers. Now that is banned and finding substitutes, even in Canada, is not likely.

In 1988 prior to Chavez, PDVSA worked with BP to patent its own oil emulsion called Orimulsion, to make the Orinoco heavy reserves into a commercial fuel. The invention allowed Venezuelan heavy oil to be sold at a price competitive with coal. However, for reasons not fully clear, in 2007 the Chavez regime sold an Orimulsion plant producing 100,000 barrels of oil daily to China. The plant had been built with a Chinese loan. Chavez’ Energy Minister, Rafael Ramírez, announced that PDVSA was ending production of Orimulsion, arguing that its processing was not “an appropriate use for Venezuelan extra-heavy crudes (sic).” He granted the Orimulsion patent to Chinese oil companies, presumably for some debt relief.

Today the Maduro government sends a major portion of its remaining oil exports in lieu of debt repayment, to China, and also less so (less debt) to Russia. Venezuela owes China some $60 billion. Those huge debts grew dramatically after in 2007 after a China-Venezuelan Joint Fund, created that year by Chávez, enabled Venezuela to borrow from China in tranches of up to $5 billion, and pay with shipments of crude oil.

This means that short of a dramatic increase in China loans or other aid to the Maduro regime amid latest US sanctions, chances for Venezuela exports of oil to the world market for vital hard currency cash amid a hyperinflation estimated by some at 60,000% annually or even well over one million percent by IMF projections, are all but gone.

The delayed result of those latest sanctions from the Trump Treasury has now created a spike in oil prices that may come to haunt Trump’s hopes for a strong economy in 2020. As the dual power war in Venezuela drags on, or even escalates into a bloody civil war, the prospect of rebuilding the battered remains of PDVSA, even were ExxonMobil or Chevron to buy a privatised entity, remains years away. Now the unanswered question is whether the dark actors behind this latest US regime change effort – the CIA, the major international banks and allied oil majors – actually intend to use their Venezuela coup crisis to escalate attacks on the Saudi Royal House to force a major cut as well in Saudi oil output, combined perhaps with a well-timed end to the US waivers to Iran oil export sanctions. Those waivers helped Trump and the US economy by averting a major oil price spike to over $100 last year before the US Midterm elections. Leaving aside whether or not Maduro is a saint, the decision by President Trump to back the Bolton-Pence call for a US intervention in Venezuela may prove a fatal error to a Trump presidency. He must realise that so the question would be whether someone is putting a gun, literal or figurative, to his head in this.[1]